The top 10 Writers To See Live

(from theguardian.com
by Matt Haig)


To mark World Book Night, which is being celebrated around the country with readings by some of our most celebrated writers, novelist Matt Haig applauds the authors who are stars of stage and page. 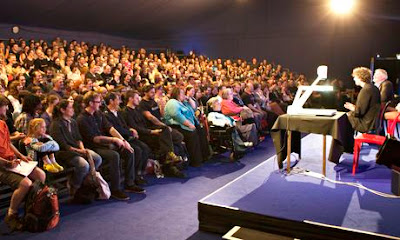 
Writers have a weird life. Ninety per cent of the time we are alone, in our attics, loafing around in our dressing gowns and trying not to punch our computers. And the rest of the time we are doing the exact opposite of this. You know, getting washed and going out into the world and performing in front of and then meeting fellow members of our species.

It is all very strange. I mean, the reason we write is because we were the shy kids and yet now we are expected to get out there and put on a show, as if we were Lady Gaga. I, for one, am terrible at performing live. To choose to see me live is like choosing to have root canal work while watching an awkward silence competition. (I jest. I'm amazing live. That's what my mum says.) Some writers though, such as those below, are as brilliant off the page as they are on.

1. Sebastian Barry
I had the experience of seeing Barry reading from his Costa-winning novel The Secret Scripture last year at a World Book Night event on the Southbank. I had never seen a reading like it. Seriously, it was a tour-de-force performance. His whole body shakes as he reads and he is certainly is unafraid to "do the voices".

2. Neil Gaiman
Probably the closest thing the world of books has to a bona fide megastar. Wherever they are, Gaiman's events attract sell-out crowds and he somehow manages to create the kind of electric pre-appearance atmosphere more commonly found in rock venues and Roman ampitheatres. He could probably fill the O2.

4. Chuck Palahniuk
To go to a Chuck Palahniuk reading is like visiting an extreme amusement park. You go as a kind of test of nerve. To date, 75 people are said to have fainted at Palahniuk events, usually while he is reading the grotesque short story Guts, which also demands readers to hold their breath for the duration of the tale.

5. Ruth Ozeki
I was lucky enough to do an event with the Booker-shortlisted author of A Tale for the Time Being last year in London. It was one of the most enjoyable I've done, and Ruth oozes warm wisdom and Zen-like charm.

6. David Levithan
Confession. I haven't actually seen him live. But when I said aloud on Twitter that I was writing this piece, about 100 (OK, six) people I trust said I must include him. So he is duly included. And next time I get the chance, I'll see him and tell you if he is worthy of his spot.

7. Jeanette Winterson
She is amazing live, and one of the few writers to read from her work exactly as you hear it in your head. She walks on with such confidence, never has any barrier between herself and the audience, and is the person I try to think of five seconds before I do any event.

8. AL Kennedy
Kennedy is very funny live: so funny you can see why she decided to cross over into full-blown stand-up comedy. But her humour is, as you'd expect, the brainy and passionate kind.

9. Laura Dockrill
Got to have a childen's witer/illustrator on the list – there are many brilliant ones to see live out there (Sarah McIntyre, Andy Stanton, Anthony McGowan, Philip Ardagh, Guy Parker-Rees) – but Dockrill is a must for sheer energy and colour. She is like Victoria Wood on Red Bull.

10. Jon McGregor
Not one of the showiest or most showboating of authors to see live, but McGregor reads very well, and he also has a lot of interesting and important stuff to say about writing. Oh, and he's drily funny too. And I've just realised I haven't enough room for Nikesh Shukla, Val McDermid and Ian Rankin, who should also be on this list...
Posted by Mollydee55 at 6:36 PM