At 68, Diane Keaton Is Pretty Great As She Is 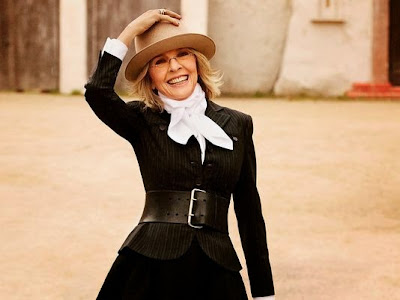 
At 68, Diane Keaton has what some may consider age-appropriate wrinkles and crow's feet around her eyes, but when she says, "I have never had work done," she's not boasting.

It's complicated, she says, which is why she wrote Let's Just Say It Wasn't Pretty (Random House).It's a collection of 13 short essays about aging, beauty, the men in her life, her two adopted children (ages 18 and 13) and why she's never married and says she never will.

As she begins her book tour, she appears for an interview dressed in full-fledged Keaton attire: a brown "Annie Hall hat," as she puts it, a "Cary Grant-like" scarf tucked into a large white blouse, a thick black belt, tight black pencil pants and classic wing-tip black shoes studded with silver dots.

Her answers are punctuated with laughter and filled with digressions.

In her book, Keaton struggles to explain why four decades after her breakout roles in The Godfather (1972) and Annie Hall (1977), she's avoided what she calls "surgical interventions.'' No Botox. No Restylane.

Over a cup of green tea at a downtown Manhattan hotel, she questions the definition of "work being done." After all, she notes, at photo shoots, "someone is working on my face and my hair…Someone is trying to youthenize me."

She says she admires women like comedians Phyllis Diller and Joan Rivers, "among the first to openly discuss their multiple cosmetic surgeries. It takes strength to fess up to your imperfections." She likes "women who utilize their flaws and play with them."

She also admires Barbra Streisand and her "untouched nose, a damn beautiful nose."

"Everyone makes her own choice," Keaton says. "Sometimes I think, what would I look like now if I had had work done? Maybe I should have started when I was in my 40s....but then I ask, 'Does it really matter?' "
Posted by Mollydee55 at 3:56 PM