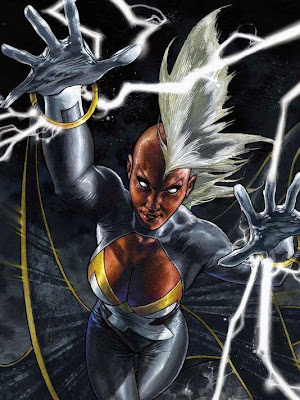 
Greg Pak is finally getting to write the Storm solo comic book he's always wanted to do. So, the choice of hairstyle was a foregone conclusion.

"Mohawk, natch," Pak says of the popular X-Men heroine with crazy-cool weather powers at the center of Storm, launching in July from Marvel Comics.

A solo book for Pak means having space and time to play a long game in terms of character and themes. And with Storm, he's exploring her combination of fury and empathy while going huge and small at once in storytelling for emotional impact.

"We're going to see Storm cutting loose with all the brass and fierceness that comes from having the power to control every aspect of the Earth's weather and atmosphere," Pak says. "And we're going to delve deep into the experiences and perspective that lead her to make decisions no other X-Man would — to tear through walls that no one else may have even realized are there."

Illustrated by Victor Ibanez, the first issue takes Storm to an idyllic Caribbean community harboring a terrible secret threat, another challenge altogether arises on the homefront at the Jean Grey School, and an old enemy returns in an entirely different way, according to Pak.

Storm has been a regular member of the mutant superhero squad since Giant-Size X-Men No. 1 in 1975 — and has been played on screen by Halle Berry in movies, including X-Men: Days of Future Past (out May 23).

Pak feels that in terms of power, Storm might be the X-Men's greatest asset, and also offers a moral center as a leader since she works for the betterment of mankind as well as her fellow mutant population.

At the same time, though, she's also been a street thief, a goddess, a leader of the Morlocks and a queen.

"She's a mutant icon — but also a hero to oppressed people everywhere," says Pak, promising to explore her morality from all angles, "especially in the ways it might clash with the objectives of her fellow X-Men." 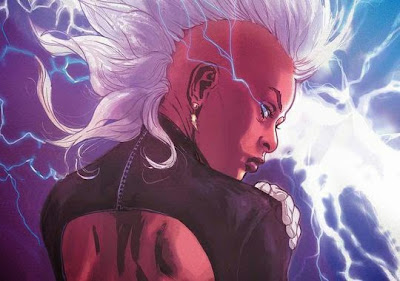 Writer Greg Pak has been a fan of Storm since he was growing up in Texas.(Photo: Victor Ibanez/Marvel Comics)

The writer has found Storm exciting and inspiring ever since he was a kid seeing a first black female superhero for the first time.

"I was a middle-class half-Korean boy growing up in Texas, not the orphaned daughter of an African-American photographer and an African princess growing up in the streets of Cairo," Pak explains. "But Storm's difference resonated with me — just by existing, she represented the idea that anyone could be a superhero, even me."

She wasn't a boring role model either, he adds. "She was a little wild, a little dangerous, and yet a hero through and through."

Pak was writing her in Astonishing X-Men and mentioned to folks that Storm was always a character he writes in a solo setting — three years ago, he even retweeted a petition a fan posted asking Marvel to create a Storm ongoing series just for him.

The winds of fate blew in a few months ago. "Marvel editor Daniel Ketchum called up," Pak recalls, "whispered 'Storm,' and my head fell off."

Storm is a strong personality who will go where she's told not to and stand with those she's not supposed to, and that will be a major aspect of Pak's new series.

"Storm fights for those who most need her, no matter what the cost," he says. "There's a ton of drama and story in exploring how she makes those decisions and what kind of trouble that will create for herself and everyone she loves."
Posted by Mollydee55 at 5:34 AM