(from theguardian.com
by Sally O'Reilly) 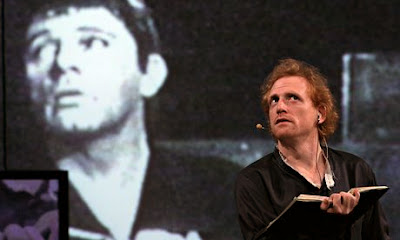 
Shakespeare famously customised existing plots when writing his plays, and added to them an acute perception of human experience which gave them universal significance. Thwarted love, ambition, greed, jealousy, fear – if you want to write a story about a fundamental predicament, there is a Shakespeare play to fit the bill. So it's not surprising that he has inspired so many writers, from Herman Melville to Angela Carter.

He dealt in archetypes before anyone knew such things existed, and his ability to take an emotion or a situation and push it to the limit helped create a cadre of plays that have been endlessly staged – and copied. Apart from the examples below, Romeo and Juliet inspired Malorie Blackman's Noughts & Crosses, there are references to Hamlet in Lunar Park by Bret Easton Ellis and The Tempest was the cue for The Magus by John Fowles.

But Macbeth is my favourite – a preference I apparently share with Jo Nesbo, who recently announced that his new noir crime novel would be based on the Scottish play. Its sinister magic is also the inspiration behind my historical novel Dark Aemilia.

In Jacobean times, the occult was accepted as part of everyday life, and witchcraft was both feared and sought out as a useful resource. I tried to channel some of this, and recreate the psychology of a fearful, superstitious age.

Melville's Great American Novel draws on both Biblical and Shakespearean myths. Captain Ahab is "a grand, ungodly, god-like man … above the common" whose pursuit of the great white whale is a fable about obsession and over-reaching. Just as Macbeth and Lear subvert the natural order of things, Ahab takes on Nature in his determination to kill his prey – and his hubristic quest is doomed from the start.

2. The Daughter of Time by Josephine Tey (Richard III)

Richard III gets a sympathetic makeover in Josephine Tey's 1951 whodunnit, which reads like a cross between Rear Window and Time Team. Detective Alan Grant, confined to bed after an accident, begins to take in interest in the much-maligned king after studying his portrait. Although clearly Richard III was a real person, the false picture we have of him was originally created by Shakespeare, Tey argues. He created a pantomime villain and child murderer in order to curry favour with his Tudor patron, Elizabeth I.

Huxley makes numerous references to the work of Shakespeare in this dystopian novel, and the title is taken from the Tempest: "O brave new world, / That has such people in 't!" Like Caliban, John "the Savage" is an outcast, despised for his appearance, and Huxley is exploring ideas about the power of art and the nature of humanity as Shakespeare does in his haunting and, possibly, final play.

I discovered Maugham when I was about 14. He was out of fashion then, and is completely below the radar now. But this is a fascinating novel about literary snobbery. The portrayal of "loose woman" Rosie Driffield is sexist in modern terms, but her unapologetic hedonism is inspired by Sir Toby Belch in Twelfth Night: "Dost thou think, because thou art virtuous, there shall be no more cakes and ale?"

Like Macbeth, Ripley wants what someone else has got. And just as Macbeth murders Duncan, Ripley bumps off golden boy Dickie Greenleaf, seeking to take his place. Then the body count rises as Ripley attempts to secure his position. This isn't a direct retelling, but the parallels are clear: Macbeth is accused of taking on "borrowed robes" and Ripley literally steals Dickie's clothes and identity. For me, the main difference between the Scottish king and the young American is that Ripley is a proper psychopath – he doesn't feel remorse.

This is a brilliant depiction of obsessive love, though its plot is a typically convoluted Murdochian creation which is inspired by Freud and Plato as well as Hamlet. It tells the story of a twisted friendship between two writers, and features some cheekily cross-dressed sex scenes in which Julian (a young woman) dresses up as the gloomy Dane. Murdoch is strongest on the unpredictability of love, and the black comedy that can result.

7. The Dogs of War by Frederick Forsyth (Julius Caesar)

Shakespeare's exploration of violence and treachery has inspired numerous contemporary writers. Forsyth references Julius Ceasar in the title of his novel about mercenaries fighting in a fictional African republic: "Cry 'Havoc!' and let slip the dogs of war." The themes also reflect those in this brutal play: the story shows these ruthless men operate by their own code, consistent but merciless, and difficult for outsiders to understand.

8. Wise Children by Angela Carter (The Taming of the Shrew et al)

Twins, doubles and paradoxes abound in Carter's final novel, as they do in Shakespeare. The story of twins Dora and Nora Chance explores ideas about paternity and incest, and the novel is written in five chapters like the five acts in a Shakespeare play. One of the themes is "high art" versus "low art" and Carter jokily refers to Shakespeare via Kiss Me Kate, a populist adaptation of The Taming of the Shrew. I loved the audacity and sheer verve in this novel, and the way it both challenges and celebrates the Shakespeare legacy.

9. Love in Idleness by Amanda Craig (A Midsummer Night's Dream)

This is a modern reworking of A Midsummer Night's Dream set in contemporary Tuscany, which gently ridicules the chattering classes. The familiar tropes of Shakespearean comedy are all there – confusion, heartache and eventual resolution. Like Murdoch, Craig has some fun with names – my particular favourites are Theo Noble and Ellen and Ivo Sponge – as well as exposing some of the frailties and inconsistencies in our approach to love and marriage.

Smiley retells the story of King Lear in modern-day Iowa in her Pulitzer-prizewinning novel. The novel is set on a thousand-acre farm which is owned by a father and his three daughters, and told from the point of view of the oldest, Ginny. Instead of dismissing the two older daughters as wicked and grasping, as Shakespeare does, in her novel Smiley explores the family secrets that underpin the drama, and shows the significance of the land itself
Posted by Mollydee55 at 10:20 AM