How Do You Get The Reader to See What You See?

(from venturegalleries.com
by Stephen Woodfin) 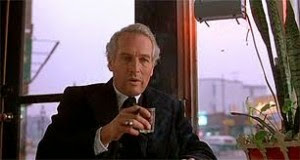 Paul Newman in The Verdict


Friday I heard a fine presentation about the craft of writing from Mike Farris, an entertainment lawyer from Dallas. The gist of Mike’s talk was that writers can learn much from watching iconic movies and thinking about the techniques screenwriters use to draw in viewers.

In the course of his speech he played snippets from several classic movies.

The first of these was the initial five minutes or so of The Verdict, the famous legal drama starring Paul Newman as a washed up plaintiff’s lawyer about to hit bottom, or maybe already there.

The opening scene has little or no dialogue and shows Newman playing pinball in a bar while he drinks. Then we see him scouring obituaries looking for clients. Then we see him approaching bereaved families in receiving lines at funeral homes.

All of this is done with hardly any conversation. 
And therein lies the rub for authors.

Syd Field, the guru of screenwriting technique, explained the difference between movies and books like this. “A book is a story told with words. A movie is a story shown with pictures.”

So the deep chasm between the two art forms lies in how a writer can use words to create images.

If I write, “Newman hovered over the pinball machine, watching the ball bearing ricochet off the bumpers, drinking the last draft beer he could afford,” I create an image which is a pale substitute for those Hollywood can produce. The only way I can hope to capture the full impact of that moment in the character’s life is to fill in a little more of the scene with a few well-chosen words.

I agree entirely with the old saw that good writing is about showing, not telling. But a writer still must use words, and words alone, to show. For instance, if I write, “He was a washed up lawyer, long in the tooth,” I am really making an author intrusion into the story, expressing a conclusion I want the reader to draw. If I write, “The frayed hem of his blue, light wool suit dragged against the pool table and knocked the square chalk for his cue stick on the floor. He swayed and stumbled when he bent to pick it up,” I am getting closer to showing.

The fine line between showing and telling is, as Mark Twain said, the difference between lightning and a lightning bug.