(from mentalfloss.com
by Arika Okrent) 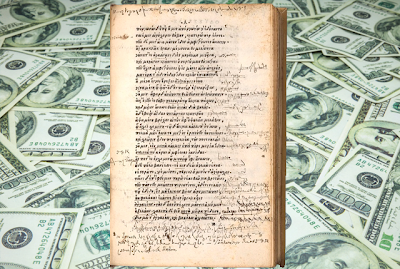 
In a special collection at the University of Chicago, in a rare 1504 edition of Homer’s Odyssey, there are two pages—and only two pages—covered with notes in a strange language. As if that wasn’t strange and spooky enough, those pages are in Book 11, the section that describes Odysseus’s journey to the underworld.

What do they say? Why are they there? The person who donated the book to the library has offered a prize of $1000 “to the first person who identifies the script, provides evidence to support the conclusion, and executes a translation of selected portions of the mysterious marginalia.” The donor thinks it may be a form of French shorthand, but has no evidence for this. The notes interact strongly with the text, underlining and bracketing the specific parts they comment on. The text is in Greek, by the way, so that may make your deciphering a little more difficult.

If code-cracking is your thing, this could be worth your while. Is it shorthand? A private language? A method for sending secret messages to prisoners? To lovers? What does it say? WHAT DOES IT SAY?

Actually, probably something pretty boring, as these things usually turn out to be. The history of writing decipherment mostly deals in accounting ledgers and royal decrees. But even if the content isn’t all that exciting, the process of unlocking the key to that content is. And while the satisfaction of solving is usually reward enough, this time there’s also a nice chunk of change to go along with it.
Posted by Mollydee55 at 4:42 PM