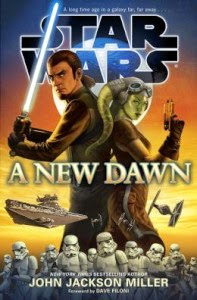 Disney Publishing Worldwide and Del Rey Books are teaming up to do a new line of Sta Wars adult fiction novels. The publishers will be working directly with brand creator, Lucasfilm.

The new books from Disney and Del Rey will be closely tied to the new Star Wars storylines being created for the forthcoming films currently in production. (Director J.J. Abrams is currently working on the first in a new series of Star Wars films, and the first feature, Star Wars: Episode VII, is tentatively set for a December 2015 release.)

Random House said that Lucasfilm, looking to unify the story around Star Wars-branded content, is mapping out a narrative that will appear "on film and television and other media." The goal, RH continued, is to ensure "all projects will benefit from real-time collaboration and alignment."

The first book in Del Rey and Disney's new Star Wars line, Star Wars: A New Dawn, will be written by author John Jackson Miller and is set "prior to the events of the forthcoming animated series Star Wars Rebels." Miller collaborated on the storyline of the novel with the producers of the animated show; the book follows how the show's two main characters, Kanan Jarrus and Hera Syndulla, meet. The book is set for a hardcover and e-book release on September 2, 2014.