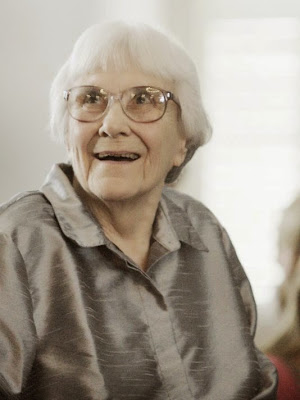 Harper Lee has signed on for Scout, Boo Radley and Atticus Finch to enter the electronic age.

Filling one of the biggest gaps in the e-library, To Kill a Mockingbird will become available as an e-book and digital audiobook on July 8, HarperCollins Publishers announced Monday. Lee, in a rare public statement, cited a "new generation" of fans in agreeing to the downloadable editions of her Pulitzer Prize-winning classic.

"I'm still old-fashioned. I love dusty old books and libraries," Lee, who turned 88 on Monday, said through her publisher. "I am amazed and humbled that Mockingbird has survived this long. This is Mockingbird for a new generation."

Monday's announcement came almost exactly a year after Lee sued her former literary agent, Samuel Pinkus, in order to regain rights to her novel. Lee, who lives in her native Alabama and has been in frail condition, had alleged she was "duped" into signing over the copyright.

The lawsuit was settled in September. Lee's attorney, Gloria Phares, said at the time that the case had been resolved to the author's satisfaction, with "her copyright secured to her."

With digital holdouts from J.K. Rowling to Ray Bradbury changing their minds over the past few years, Lee and her novel had ranked with J.D. Salinger and his The Catcher In the Rye as a missing prize for e-book fans. First published in July 1960, Mockingbird has sold more than 30 million copies worldwide and still sells more than 1 million copies a year, according to HarperCollins. It was adapted into a 1962 movie of the same name that featured an Oscar-winning performance by Gregory Peck as Finch, the courageous Alabama attorney who defends a black man against charges that he raped a white woman.

Mockingbird remains a standard text in classrooms and is a popular choice for citywide and national reading programs. Lee never published another book, which only seemed to add to the novel's appeal, and she has for decades resisted interviews and public appearances.

"Every home has a dog-eared copy of To Kill a Mockingbird, and now readers will be able to add this favorite book to their digital libraries," Michael Morrison, president and publisher of HarperCollins U.S. General Books Group and Canada, said in a statement. "Although today is Nelle Harper Lee's birthday, she is giving readers around the world the gift of being able to read or listen to this extraordinary story in all formats."

The new audiobook will be a downloadable edition of the existing CD narrated by Sissy Spacek. Harper also is releasing an "enhanced" e-book that will feature additional material. Spokeswoman Tina Andreadis said the extra features had not yet been determined.

With Mockingbird now set for e-release, major works still unavailable in digital editions include The Catcher In the Rye, The Autobiography of Malcolm X and Gabriel Garcia Marquez's One Hundred Years of Solitude.
Posted by Mollydee55 at 7:38 AM