(from usatoday.com
by Billy Watkins) 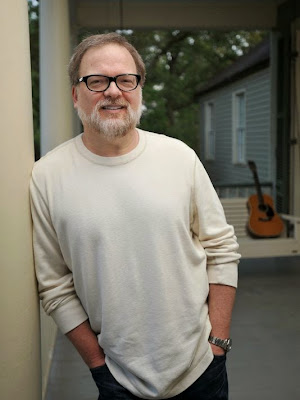 
Greg Iles never saw the blur coming at him at 70 miles per hour.

He doesn't remember pulling onto U.S. 61 on the south side of Natchez and the Ford pickup slamming into his driver's side door. Or his black Audi ricocheting 70 feet down the highway, finally coming to rest in the median.

"I thought he was dead when I went running toward the car," says his fiancée, Caroline Hungerford, who was driving behind Iles and saw the gruesome crash that occurred around 7 p.m. on March 7, 2011. "I was screaming. The interior of the car was smoky — I guess from the air bags deploying. When I finally got the passenger-side door open, he was conscious and breathing. He kept repeating 'what happened?' and kept saying his leg was really hurting."

The celebrated novelist, who has sold more than 10 million books over the past 20 years and had 13 New York Times best-sellers, was eventually airlifted to the University of Mississippi Medical Center in Jackson. Nearly every rib was broken. The bones in his left foot were shattered. His pelvis was split in four places. His right leg was mangled and hanging on by threads of skin.

At least two of his UMMC doctors have since admitted to Iles they were certain he would die — they just weren't sure of the time or exact cause.

"The first thing I remember is waking up about two weeks after the accident and somebody telling me they'd had to take my right leg just below the knee," says Iles, 54. "And I remember not even caring ... I was still in so much pain."

The driver of the pickup, 19-year-old Elizabeth Moore, also sustained injuries, including a broken leg, broken ribs and a punctured lung. She, too, underwent surgery at UMMC. She has reportedly recovered.

"All of this," Iles says, shaking his head, "because I drove over to the house we were working on to look at paint colors ... like that matters."

For all of his success — million-dollar book deals and fans all over the world who sent him more than 15,000 concerned emails in the first few days after the accident — Iles remains as down to earth as they come.

He and Caroline greet a reporter and photographer at the door of the house they share, set on 40 secluded acres south of town.

Before any interview begins, they insist on sharing lunch. Caroline makes turkey sandwiches for all, and Iles talks about his first book in five years — "Natchez Burning" — set for release Tuesday.

He looks healthy, happy. He and Caroline will be married in October. And he is the same ol' Greg Iles, talking 90-to-nothing, laughing a lot and sharing stories as only he can tell them.

"Got something to show you," he says, as we move from the kitchen to the dining room table. He walks away and comes back with a handmade baritone acoustic guitar. Before he was a writer, he was a professional musician, a guitarist/vocalist/songwriter with the rock group Frankly Scarlet.

Nowadays, he is a member of The Rockbottom Remainders, along with fellow authors Stephen King, Amy Tan, Mitch Albom, Roy Blount Jr., Dave Barry, James McBride, Scott Turow and Matt Groening. Roger McGuinn, former lead singer of The Byrds, is a regular. "Plus, we've got a couple other ringers we throw in there," Iles says with a smile.

He hit the road to chase his music dream after graduating from Ole Miss in 1983 with a degree in English. But by 1990, Iles was living in New Orleans where his wife at the time was in dental school and he had decided to write a book.

He gave himself one year.

"We were living in a tiny apartment, had no money," he says. "I remember going to the bookstore in a mall and looking up at all the books on the shelves. I was like, 'How will I ever get from where I am right now — not even able to go to Wendy's — to having a book up there?' It seemed impossible."

He wrote half a novel, followed the directions in "Writer's Market" and sent 10 agents the incomplete manuscript.

He received a letter and a phone call from a woman who ran a small agency in Oregon. She liked it.

"I called her back a few months later, told her it was done," he recalls. "She was coming to a writer's conference in Beaumont, Texas, and asked if I could meet her over there.

"I didn't even own a sport coat. So my mom and dad drove to New Orleans, took me to Dillard's and bought me a blue blazer."

The agent sent it out and pretty quickly received an offer for $10,000. Iles wanted to accept. She advised him to wait.

Soon, another publisher offered $30,000. Again, she advised him not to take it.

"At this point, everybody thought I was crazy — including me," Iles says. "Then what they called 'bid day' rolled around. That's when the big publishers — and there were about 29 of them back then compared to about three now — all bid on books. Well, 5 o'clock in the afternoon rolls around and my phone isn't ringing. I'm thinking 'I could've had $30,000.'"

He flew to Oregon a few months later to meet with his agent and publisher. He was asked about ideas for future books.

"Well, I'm all about ideas," he says, laughing. "I gave 'em four in no time. The publisher and my agent went into a room, and I'm wondering what the heck is going on. She comes out, we get on the elevator and she says, 'You just got another deal. Two more books, $275,000.' I told her I liked the deal very much. And I haven't looked back since."

His 14th — "Natchez Burning" — was nearly finished at the time of the wreck. It has since turned into the first of a trilogy that is set in the 1960s and deals with white vs. black, fathers and sons, interracial love and the inhumane acts of the Double Eagles, a spinoff of the KKK.

"So everyone will know, this is not a book preaching about civil rights," Iles says. "I'm telling you what it felt like to be black or white during that time."

The interview is well past two hours, and Greg is still holding court at the dining room table.

"What kind of pictures y'all want to get?" Iles asks.

"Do you mind if your prosthetic leg is showing in the photos?" the photographer asks.

In an instant, Iles pulls up his right pant leg, snaps off the prosthetic and holds up his stump. It is smooth and clean. Iles' unabashed way of handling the situation almost makes one forget what a life-altering injury it was.

He recalls the first day he was being fitted for the prosthesis. Until then, he had spent weeks in the bed or a wheelchair.

"This big ol' buffed guy told me, 'All we're going to do today is get you up. Hold on to those parallel bars. We just want you to see how it feels, then we'll go from there. But we're not going to try walking today,' " Iles says. "When they put that (prosthesis) on me, I got up on those bars and I said, 'No offense, bro. But get out of my way. We're walking today.' And I walked all the way down those parallel bars. It hurt. But I'll tell you what I give credit to right now — playing high school football (at Trinity High in Natchez). When they put me up on those bars ..."

His voice breaks, and tears come.

"I've spent the last two years sitting in a chair, man, writing this book. I haven't gotten in the (physical) shape I should. I still use a wheelchair. It's easier to walk on this leg than it is to sit with it on. It presses on you. And it's a pain to take it on or off, so I'll just jump on my motorized wheelchair and get around the house. But I'm gonna get better."

He talks of Caroline, how "she saw so much, did so much for me ... she was amazing when she didn't have to be. And my kids (Madeline, 20, and Mark, 17) ... it was very tough on them to see their dad in such bad shape. But they stood tall and did their part. Most of all, I knew they needed me alive at least a few more years."
Posted by Mollydee55 at 11:54 AM