(from theguardian.com
by Dave Eggers) 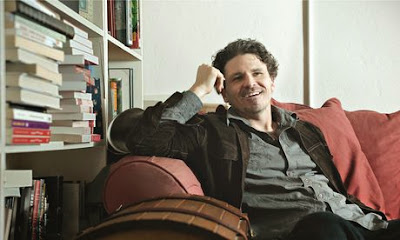 Dave Eggers: 'I couldn’t draw small and I couldn’t draw neatly, and I got frustrated trying to plan out all those boxes and draw the same thing multiple times in multiple ways.' Photograph: Annie Tritt/Contour by Getty Images


Here and there in my wayward 20s, I took stabs at making comics, and at least three-fourths of these efforts were abject failures. I'd gone to art school, for a time, and had studied drawing and painting since I was very young, but something about the planning and execution of a quality comic eluded me. Why? Mainly because I was a slob. I'd been a painter, mostly, and worked on large canvases, so I couldn't draw small and I couldn't draw neatly, and I got frustrated trying to plan out all those boxes and draw the same thing multiple times in multiple ways. I was dispositionally unfit for life as a comics artist.

So, because I knew first-hand how hard it was both to write and draw well, and to make a comprehensible narrative in the comics medium, and how exceedingly hard it was to make something of real beauty and power, I became an advocate for the form. When I read the work of Art Spiegelman, Lynda Barry, Dan Clowes, Julie Doucet, Chris Ware, Tom Tomorrow, Adrian Tomine – among some of the others – I could appreciate how indescribably difficult it was for them to be operating at such a high level in so many areas: writing, drawing, page design, typography – not to mention that comics are essentially screenplays, where the dialogue has to do all or most of the work of advancing the story.

When I was asked to be part of this comics issue, the failed comics artist in me asked for another chance. Instead of collaborating with a professional artist – the smart route – I took the other route, challenging myself finally to try to finish something coherent and reasonably tidy. Almost 20 years after I last created a comic, I tried again, and this time it was not much different. I was sloppy, and it took far longer than I'd anticipated. But I think, in the end, I made something more or less understandable, and slightly less embarrassing than I'd feared.

I also drew the cover, and for this I need to give credit to an old book I have called Boys Of Our Empire, based on the magazine of the same name. I have a 1902 edition full of stories for young readers about the various exploits of British soldiers and adventurers. It's wonderful and hilarious and frequently horrifying, with its ever-present posture of imperialist entitlement. But anyway, in it there are various stories that take place in the American west, and the picture I drew for the cover is an adaptation of one of the illustrations. (I would name the artist, but the illustrators are strangely uncredited.)

About the specific story of my comic, I can say that it's been percolating in my mind for a long time. In the middle of San Francisco we have Golden Gate Park, which is enormous and a bit wild, and which has many dozens of smaller parks and unusual features – including a small field where a herd of bison are kept. Bison have been there since 1890, in varying numbers, but always displaying the same utter lack of enthusiasm for their lot in life.

I've been to see the bison about 50 times over the years and I don't know if I've ever seen any of them move. They just sit, as far from the viewing area as possible – as if they know we want them to run and frolic, and they want to give us the precise opposite. Even the park caretakers acknowledge this in their official literature: "Don't expect a grand show of movement and daring feats when visiting the bison. They tend to keep to themselves and really don't engage in any exciting activities. If you are lucky, one of the bison may slowly travel from the field to the corral."

So I've long wondered if this is some secret bison ploy, to lure their keepers into a false sense of security, then one day break free. That said, I don't know if the story takes place in Golden Gate Park or somewhere else. A few years ago I visited another bison park in Alaska, and took photos there, which I used for references here. And there are parks all over the American west where well-meaning caretakers fence in a few dozen bison, in tribute to this majestic, presumably dull-witted animal, whom American and European hunters hunted to near-extinction. In any of these parks, the bison – who might be geniuses just waiting for their moment – could be plotting their escape and world domination. There's no way to disprove it.

• Dave Eggers is the editor of McSweeney's, and the author of nine books, most recently The Circle.
Posted by Mollydee55 at 4:24 PM