**The first book in a brand new series from USA Today bestselling author Rachel Schurig. This New Adult Contemporary Romance novel is a complete story with no cliffhanger.**

Daisy Harris has no reason to suspect that her day will be any different than usual. She’ll go to class, alone. She won’t speak or make eye contact. She’ll spend her entire day doing her best to go completely unnoticed. That’s what life is like for Daisy now—an endless cycle of loneliness and fear. A life lived hiding behind the walls she so faithfully maintains.

Then she sees it. A magazine, left behind in class. A simple picture—just his face. And it changes everything.

It’s been a year since she’s seen Daltrey Ransome. A year since he and his brothers left town to pursue their dreams of rock and roll superstardom. A year since he left Daisy behind—left her to watch as everything she knew crumbled around her. She’s been running from Daltrey ever since, desperate to keep her secret.

But she can’t run anymore. And now that Daltrey has found her—the girl he’s loved his entire life, the girl he’d give up everything for—he’s determined never to let her go again.

I wake up, alone in a dark hotel room, my heart racing, scared out of my mind. When I finally figure out where the hell I am, I rub my aching chest. I’m glad I’m not on the bus, glad there’s no one in here to see me like this. I’m pretty sure the wetness I feel on my cheeks is tears, and my brothers would never let me live that down.

Knowing sleep isn’t going to return anytime soon, I climb out of bed and head for the mini bar. I grab a cold beer, even though I could probably use something stronger. You’re too young for a drinking problem. So-called rock star or not.

I take the beer to the small balcony of my room and lean against the railing, looking out over the lights of Memphis. We played a kick-ass show, and I should still be on a high from it. The crowd was amazing. Everything felt right in the world, for a few brief hours. I could forget about the knowledge that I’d traveled halfway across the country without actually seeing any of it. Forget the fact that the tour bus, though more luxurious than our old van, was cramped and starting to make me feel claustrophobic. Forget about how tired I was and how my throat hurt pretty much every day now. When we played like that, when we somehow managed to tap into that almost magical, synched-up, out-of-body place I can’t even describe, I could forget about all the shitty stuff and remember why we were doing this in the first place.

I had felt that tonight, for the first time in weeks, and the sensation had been fantastic. I should have slept like a baby. But here I was again, drinking a beer by myself at three in the morning.

I keep having dreams about her.

Which is pretty fucking ridiculous because I haven’t talked to the girl in about a year. Daisy made it perfectly clear that, for whatever reason, she was done with me—just like that, years of friendship, gone. And I don’t even know what the hell I did.

Okay, so I left, but she always knew that was going to happen. We planned for it, for Christ’s sake. Worked for it. Both of us. She had every bit as much to do with our success as anyone in the band. She was our biggest supporter, our loudest critic. We never performed a song without her hearing it first, never played a gig without her there. She was with us on that first horrible so-called tour, riding around Pennsylvania, Ohio, and Indiana to all those dingy dive bars. She helped us plaster the towns with our flyers and sell our homemade CDs, just waiting for our big chance.

And when it came, when we got the call from Grey Skies that they wanted us to open for them, she was there then, too. She sat at our kitchen table, just like she had a thousand times before, waiting with bated breath for my dad to get off the phone with their manager. When he finally hung up and confirmed that our big break had appeared, she was the first person I grabbed as the kitchen erupted around us. She was happy for me—not the fake kind of happy that you think another person wants to see. She was genuinely, honest-to-God, screaming-her-face-off-while-hugging-me happy.

The only bad thing about those hectic, heady weeks before the tour was leaving her. I wanted to tell her then, the thing I’d always known but been too afraid to say, but I didn’t. I couldn’t imagine saying those three words—finally saying them, out loud, not just in my head where I imagined it constantly—and then leaving. So I held my tongue, and my tears, as I hugged her one last time before heading for the airport.

Maybe I should have said it. Maybe then she wouldn’t have disappeared the way she did. But I had a plan, damn it. I was going to come back, take her to her prom, the way we always talked about, and drop the bomb that I wanted us to be more. The way it played out in my head was that she’d be so happy she’d be willing to leave with me. She would forget about the business school she never really wanted to attend to come on tour with us. I wanted to experience this with her. I wanted to show her the world.

Taking another sip of beer, I wonder—not for the first time—what in the hell I could have done to piss her off so much. She stopped taking my calls about three months after we left for California. By then we’d recorded our album and started to tour as the openers for Grey Skies. I used to call her every night, eager to tell her all about life on the road in a proper tour. We had a lot more free time back then, and I was actually getting a chance to do things in the towns where we stopped. Was that it? Was she jealous?

But that wasn’t like Daisy. I cannot imagine that she would throw away a thirteen-year friendship out of jealousy. It didn’t make any sense. But one day, she didn’t answer when I called. And didn’t respond to my voice mail. Or my increasingly panicked text messages. My emails went unanswered, too.

I tried for weeks to reach her, calling her house, her phone, her dad’s phone. He told me flat out she didn’t want to talk to me, but I still couldn’t accept it. Even when her cell number was disconnected, when my emails started to come back with the message that there was no such address, I didn’t get it. It wasn’t until she finally called me to cancel our prom plans that I realized what she’d been trying to tell me: She didn’t want to have anything to do with me.

I replay those weeks all the time, wondering what I could have done differently. I always come back to the same thing: I should have gone home. I should have told my dad to screw himself and gotten on a plane. They could have managed without me for a few days. Even if they couldn’t, even if it would have jeopardized our chance to open for Grey Skies, I should have done it anyway. Daisy was worth it.

But I didn’t. And now she’s away at college, probably having the time of her life, forgetting all about her old friend. I can see her so clearly, sitting on a green lawn, surrounded by friends, like some fucking commercial, her brown curls blowing in the breeze as she laughs. The image makes my chest ache again. She’s gone, man. Accept it.

I look out over the city again, my beer bottle empty. She is gone, hundreds of miles away, totally out of my reach. And I’m here, alone in the middle of the night, haunted by memories of the only girl I ever loved. 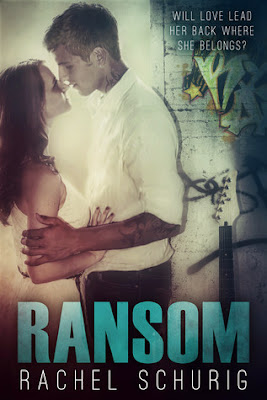 Rachel Schurig lives in the metro Detroit area with her dog, Lucy. She loves to watch reality TV and she reads as many books as she can get her hands on. In her spare time, Rachel decorates cakes. Her THREE GIRLS series is available now from Amazon!

What was your inspiration for writing Ransom?
I’ve wanted to write a rock star romance for a long time. When I was in college some friends and I spent a few months following our favorite band on tour. It was one of the best times I’ve ever had! There’s something about a good road trip with good friends—add in the thrill of live music and it can’t be beat! I wanted to write about girlfriends going on an adventure like ours—and finding love along the way. Who doesn’t want to fall for a rock star??

What can you tell us about Daisy?
Poor Daisy’s had a rough year. After her best friend, Daltrey, left to hit it big with his band, Ransom, things went south for Daisy. The victim of some pretty vicious online bullying, she began to withdraw from the world around her. Severe panic attacks brought on by the trauma make it very difficult for her to interact with her peers as she starts college. By the time she meets Ransom fans Karen and Paige, she’s almost forgotten what it’s like to have friends. Karen and Paige help her regain her confidence and find the strength to rekindle her friendship with Daltrey.

What about Daltrey?
Daltrey is one of my favorite characters I’ve ever written. In many ways he’s your classic rock star—sexy, kind of dangerous, very talented, a little cocky. But he’s also incredibly sensitive and emotional. He never got over losing Daisy and now that she’s back in his life he’s determined not to lose her again. His dedication to the girl he’s always loved is pretty swoon worthy!

Can you give us three random facts about Ransom?
1. I plotted this entire book, right down to the names of all the characters, in one afternoon. In fact, I was waiting in line for a ride at Disneyland when inspiration struck. I was so glad I had my cell phone to take notes! By the time I reached the front of the very long line I had all the details squared away.
2. Daltrey and his brothers are all named after famous rock stars who influenced their father. I spent a lot of time choosing the names; I wanted the most influential musicians I could think of but I also needed to make sure the monikers sounded good as first names.
3. Music was a very big part of my writing process with this story. I created a playlist as I wrote, adding more songs as I went along. By the time I was finished I had a huge list, and I listened to it every time I worked on the book.

The first is a host (that's me!) giveaway of one ebook copy of Ransom. Simply look to your right for the rafflecopter form and do what it says to enter the giveaway.

The second is a blitz-wide giveaway of a $50.00 Amazon gift card. Click the following link and do what it says to enter the giveaway: http://www.rafflecopter.com/rafl/display/d04251409/