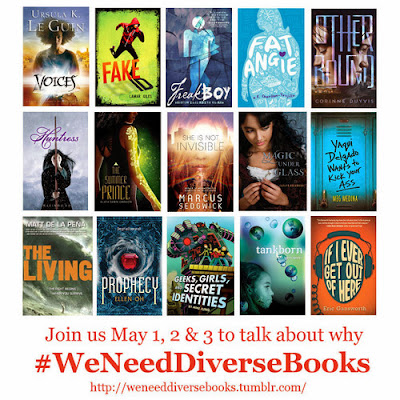 Recently, there’s been a groundswell of discontent over the lack of diversity in children’s literature. The issue is being picked up by news outlets like these two pieces in the NYT, CNN, EW, and many more. But while we individually care about diversity, there is still a disconnect. BEA’s Bookcon recently announced an all-white-male panel of “luminaries of children’s literature,” and when we pointed out the lack of diversity, nothing changed.

Now is the time to raise our voices into a roar that can’t be ignored. Here’s how:

On May 1st at 1pm (EST), there will be a public call for action that will spread over 3 days. We’re starting with a visual social media campaign using the hashtag #WeNeedDiverseBooks. We want people to tweet, Tumblr, Instagram, Facebook, blog, and post anywhere they can to help make the hashtag go viral.

For the visual part of the campaign:

The photo can be of you or a friend or anyone who wants to support diversity in kids’ lit. It can be a photo of the sign without you if you would prefer not to be in a picture. Be as creative as you want! Pose the sign with your favorite stuffed animal or at your favorite library. Get a bunch of friends to hold a bunch of signs.

However you want to do it, we want to share it! There will be a Tumblr at http://weneeddiversebooks.tumblr.com/ that will host all of the photos and messages for the campaign. Please submit your visual component by May 1st to weneeddiversebooks@yahoo.com with the subject line “photo” or submit it right on our Tumblr page here and it will be posted throughout the first day.

Starting at 1:00PM (EST) the Tumblr will start posting and it will be your job to reblog, tweet, Facebook, or share wherever you think will help get the word out.

The intent is that from 1pm EST to 3pm EST, there will be a nonstop hashtag party to spread the word. We hope that we’ll get enough people to participate to make the hashtag trend and grab the notice of more media outlets.

The Tumblr will continue to be active throughout the length of the campaign, and for however long we need to keep this discussion going, so we welcome everyone to keep emailing or sending in submissions even after May 1st.

On May 2nd, the second part of our campaign will roll out with a Twitter chat scheduled for 2pm (EST) using the same hashtag. Please use #WeNeedDiverseBooks at 2pm on May 2nd and share your thoughts on the issues with diversity in literature and why diversity matters to you.

On May 3rd, 2pm (EST), the third portion of our campaign will begin. There will be a Diversify Your Shelves initiative to encourage people to put their money where their mouth is and buy diverse books and take photos of them. Diversify Your Shelves is all about actively seeking out diverse literature in bookstores and libraries, and there will be some fantastic giveaways for people who participate in the campaign! More details to come!

We hope that you will take part in this in any way you can. We need to spread the word far and wide so that it will trend on Twitter. So that media outlets will pick it up as a news item. So that the organizers of BEA and every big conference and festival out there gets the message that diversity is important to everyone. We hope you will help us by being a part of this movement.
Posted by Mollydee55 at 2:50 PM