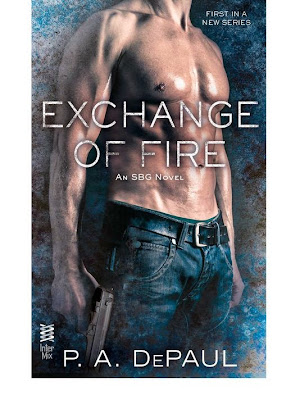 
Wow. Look at that cover. I can't STOP looking at it. But I must in order to write this intro … just give me a sex … I mean, sec. And another sec …

OK, I'm back. So P.A. DePaul is here to share the cover of Exchange of Fire, the first in her new romantic suspense series, and how it came about. (To see a larger version of the cover — and why the heck wouldn't you want to? — click on the blue arrow in the lower right corner of the image.)

I absolutely love alpha heroes and in this first book there are two of them. Sweet, right? Usually one character is much more dominant than the other. But in Exchange of Fire, both the hero and heroine vie for the top spot and eventually figure out how to share the star position.

Now, anyone who knows me will be the first to tell you I love action movies. I'm usually saying stuff like, "If it blows up spectacularly, I'm there," or "If it's spies vs. spies, I'm sitting in the front row." You get the picture. When I read a book, it's the same thing. I want my pulse to race. I want to feel so invested in the characters that I'm blowing past my bedtime to read what happens next.

So, when the idea of a female sniper floated through my brain, I was intrigued. It's certainly not a traditional role for a heroine and that presented some challenges. What type of woman would my heroine be to choose this as her career? Who would she work for? Would she be alone or have a team? What types of enemies would she face?

Enter Delta Squad. An elite group of people from a wide variety of backgrounds who were trained to work together as a team. But who did they work for? Hmm … the military seemed too confining, and the FBI or CIA didn't feel right. Bing! Private Military Company. Thus, SweetBriar Group (or as my characters call it, SBG) was born.

So, now I know who she works for and with, but what enemies does she face? Does the public know about Delta Squad or are they covert? Covert instantly pops into my brain because, come on, it's so much sexier to be a secret operative. Their missions take them around the world, battling everything from drug lords to sex slavery … and that's just in the first book.

The final piece I needed was a company tagline. Something as pompous as the CEO of SweetBriar Group himself. Cue Black Ops Without the Red Tape. After all, the government is their biggest client. They handle the missions politicians can't be associated with.

But, I mentioned there are two alpha heroes. That's right. You can't have a heroine of this caliber without giving her a kick-butt hero. Meet Casper Grady. Former Marine turned successful businessman. He's got the inner strength and character to keep our heroine from rolling right over him, as well as the intelligence to know what to do when she finds herself in deep doo-doo. Did I mention how yummy he is? No? Just take a peek at the cover, you'll get the picture. (Ha! Pun not intended but funny anyway.)

I could go on and tell you about the inspiration behind our series villain, the CEO of SweetBriar Group, but I think Happy Ever After wants their blog back. Thank you so much for joining me for my cover reveal. The InterMix art department did a fantastic job, didn't they? Exchange of Fire: An SBG Novel is releasing Aug. 19.

Here's the blurb about Exchange of Fire:

Faking her death was easy, living with her past is harder, but nothing is more dangerous than falling in love…

Sandra Walsh was a deadly sniper for the Sweet Briar Group, a covert agency with assassins for hire, until her last mission went horribly wrong, accidentally killing an innocent girl. Knowing she's a danger to her team, Sandra goes off the grid, becoming a Shade—an agent declared dead but secretly hiding among the living. She intends to honor her vow never to pull another trigger or have contact with the spy world again. Until she meets Casper Grady…

Grady is a former Marine with a troubled past and a debt to pay. His life mission has gone from protecting the nation to helping local children and their families. The moment he meets Sandra, he knows there's more to her than meets the eye, but he can't help but be drawn to the mysterious femme fatale. And when Sandra's past suddenly catches up to her, Grady is determined to protect her at all costs, no matter how dark and dangerous her secrets are.

As the danger increases, so does their intense attraction. But when they're forced to choose between each other and the people they've sworn to protect, their growing love might not be enough to keep them together—or alive…

Find out more at www.padepaul.com and on Facebook.
Posted by Mollydee55 at 4:14 AM