Top Reasons Nobody Bodine Can Be Your New Book Boyfriend 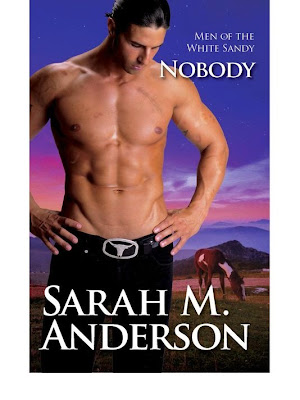 
Author Sarah M. Anderson sells us on Nobody Bodine, the hero of her new release, Nobody. (Based on that cover, I'm not needing much selling, frankly.)

Sarah: Sure, we talk about spunky heroines and funny sidekicks, but as a reader, I want the hero of my book to be my book boyfriend — all of the emotional perks and warm glow of that falling-in-love feeling without having to wash dirty socks.

So let me introduce you to Nobody Bodine, your new book boyfriend! Why?

• He's not afraid of a little hard work. Nobody is the caretaker of a herd of 27 half-wild horses. He feeds them, brushes them, and trains them to be ridden without a saddle or even a bridle. A man who loves animals? Yes, please.

• He keeps his home immaculately clean. A place for everything and everything in its place is how he sees the world. While Nobody does veer toward being a neat-freak, that just means you won't have to pick up after him and he'll always be ready to do the dishes!

• Nobody loves to read. His trailer is crammed from floor to ceiling with quite possibly every Western ever written — all in alphabetical order, of course. Imagine! You can read your romances without anyone complaining about how boring books are — because Nobody will have his nose buried in a book of his own.

• Nobody has a code of honor he follows at all times. Sure, his code doesn't always lead to the most legal of choices — like when he "borrows" the lawn furniture he uses from a big-box hardware store. But he never "borrows" something that would cause a hardship — he would never take something just because he wanted it. He only takes what he needs and nothing more.

• Nobody likes kids. He's the self-appointed guardian of a young boy named Jamie who lives in an abusive home. Whenever he can, Nobody protects the kid — sometimes by beating back Jamie's father, sometimes by giving Jamie a safe place to stay until things calm down. Nobody would die to protect Jamie. If that's not hero material right there, I don't know what is.

• Last (but not least!), Nobody is simply hotter than sin. He's built like a brick house — nothing but compact muscle. He's not afraid to fight for what he thinks is right — and he's got the scars to prove it. All of that physicality carries over to the bedroom. He's so strong — and so concerned with his lover's well-being — that sometimes he needs to be reminded to let go. But don't worry, ladies — he takes direction very well!

Here's the blurb about Nobody:

Nobody Bodine is a nobody who came from a nobody and will always be a nobody.

He disappears into the shadows—no one sees him if he doesn't want them to. He exists in neither the white man's world nor the tribe's, dispensing vigilante justice when he sees fit. There's no other place for a man like him in this world.

Until Melinda Mitchell shows up on the rez. From the first moment he lays eyes on her, he can tell there's something different about her. For starters, she's not afraid of him. She asks where his scars came from, and why he has so many. But more than that, she sees him. For the first time in his life, Nobody feels like a somebody in her eyes.

Melinda has come west to run the new day care on the White Sandy Reservation. She's intrigued by this strange man and his tattered skin, and when she discovers that he's a self-appointed guardian angel for the boy in her care, she realizes that there's more to Nobody than meets the eyes. But how far will he go to keep the boy safe? And will she be able to draw him into the light?

Find out more at www.sarahmanderson.com.
Posted by Mollydee55 at 10:58 PM