THE STRANGE TRIUMPH OF “THE LITTLE PRINCE”

(from newyorker.com
by Adam Gopnik) 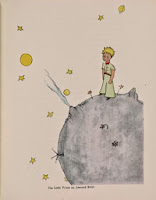 Of all the books written in French over the past century, Antoine de Saint-Exupéry’s “Le Petit Prince” is surely the best loved in the most tongues. This is very strange, because the book’s meanings—its purpose and intent and moral—still seem far from transparent, even seventy-five-plus years after its first appearance. Indeed, the startling thing, looking again at the first reviews of the book, is that, far from being welcomed as a necessary and beautiful parable, it bewildered and puzzled its readers. Among the early reviewers, only P. L. Travers—who had, with a symmetry that makes the nonbeliever shiver, written an equivalent myth for England in her Mary Poppins books—really grasped the book’s dimensions, or its importance.

Over time, the suffrage of readers has altered that conclusion, of course: a classic is a classic. But it has altered the conclusion without really changing the point. This year marks an efflorescence of attention, including a full-scale exhibition of Saint-Exupéry’s original artwork at the Morgan Library & Museum, in New York. But we are no closer to penetrating the central riddle: What is “The Little Prince” about?

Everyone knows the basic bones of the story: an aviator, downed in the desert and facing long odds of survival, encounters a strange young person, neither man nor really boy, who, it emerges over time, has travelled from his solitary home on a distant asteroid, where he lives alone with a single rose. The rose has made him so miserable that, in torment, he has taken advantage of a flock of birds to convey him to other planets. He is instructed by a wise if cautious fox, and by a sinister angel of death, the snake.

It took many years—and many readings—for this reader to begin to understand that the book is a war story. Not an allegory of war, rather, a fable of it, in which the central emotions of conflict—isolation, fear, and uncertainty—are alleviated only by intimate speech and love. But the “Petit Prince” is a war story in a very literal sense, too—everything about its making has to do not just with the onset of war but with the “strange defeat” of France, with the experience of Vichy and the Occupation. Saint-Exupéry’s sense of shame and confusion at the devasation led him to make a fable of abstract ideas set against specific loves. In this enterprise, he sang in unconscious harmony with the other great poets of the war’s loss, from J. D. Salinger—whose great post-war story, “For Esmé—with Love and Squalor” shows us moral breakdown eased only by the speech of a lucid child—to his contemporary Albert Camus, who also took from the war the need to engage in a perpetual battle “between each man’s happiness and the illness of abstraction,” meaning the act of distancing real emotion from normal life.

* * *
We know the circumstances of the composition of “The Little Prince” in detail now, courtesy of Stacy Schiff’s fine biography, “Saint-Exupéry.” Escaped from Europe to an unhappy, monolingual exile in North America, engaged in petty but heated internecine warfare with the other exile and resisting groups (he had a poor opinion of DeGaulle, who, he wrongly thought, was setting the French against the French, rather than against the Germans), Saint-Exupéry wrote this most French of fables in Manhattan and Long Island. The book’s desert setting derives from the aviator Saint-Exupéry’s 1935 experience of having been lost for almost a week in the Arabian desert, with his memories of loneliness, hallucination, impending death (and enveloping beauty) in the desert realized on the page. The central love story of the Prince and Rose derives from his stormy love affair with his wife, Consuelo, from whom the rose takes her cough and her flightiness and her imperiousness and her sudden swoons. (While he had been lost in the desert in ’35, Schiff tells us, she had been publicly mourning his loss on her own ‘asteroid,’ her table at the Brasserie Lipp.) The desert and the rose—his life as an intrepid aviator and his life as a baffled lover—were his inspiration. But between those two experiences, skewering them, dividing them with a line, was the war.

In the deepest parts of his psyche, he had felt the loss of France not just as a loss of battle but also as a loss of meaning. The desert of the strange defeat was more bewildering than the desert of Libya had been; nothing any longer made sense. Saint-Ex’s own war was honorable: he flew with the GR II/33 reconnaissance squadron of the Armée de l’Air. And, after the bitter defeat, he fled Europe like so many other patriotic Frenchmen, travelling through Portugal and arriving in New York on the last day of 1940. But, as anyone who lived through it knew, what made the loss so traumatic was the sense that the entire underpinning of French civilization, not merely its armies, had come, so to speak, under the scrutiny of the gods and, with remarkable speed, collapsed.

Searching for the causes of that collapse, the most honest honorable minds—Marc Bloch and Camus among them—thought that the real fault lay in the French habit of abstraction. The French tradition that moved, and still moves, pragmatic questions about specific instances into a parallel paper universe in which the general theoretical question—the model—is what matters most had failed its makers. Certainly, one way of responding to the disaster was to search out some new set of abstractions, of overarching categories to replace those lost. But a more humane response was to engage in a ceaseless battle against all those abstractions that keep us from life as it is. No one put this better than the heroic Bloch himself:

The first task of my trade (i.e. of the historian, but more broadly the humanist properly so called) consists in avoiding big-sounding abstract terms. Those who teach history should be continually concerned with the task of seeking the solid and concrete behind the empty and abstract. In other words, it is on men rather than functions that they should concentrate all their attention.
This might seem like a very odd moral to take from the experience of something as devastating as the war. But it wasn’t merely intellectual, an amateur’s non-combatant epiphany. At a purely tactical, military level, the urge to abstraction had meant the urge to fetishize fixed, systematic solutions at the expense of tactical fluidity and resourcefulness. The Maginot line was an abstract idea that had been allowed to replace flexible strategy and common sense. (One recalls Picasso’s comment to Matisse, when the troubled French painter asked him, in 1940, “But what about our generals, what are they doing?”: “Our generals? They’re the masters at the Ecole des Beaux Arts!” Picasso responded, meaning men possessed by the same rote formulae and absence of observation and obsessive traditionalism as the academic artists.

From an experience that was so dehumanizing and overwhelming—an experience that turns an entire human being with a complicated life history and destiny first into a cipher and then into a casualty—Saint-Exupéry wanted to rescue the person, not the statistic. The statistics could be any of those the men on the planets are obsessed with, the ‘counting’ fetish that might take in stars if one is an astronomer or profits for businessmen. The richest way to see “Le Petit Prince” is as an extended parable of the kinds and follies of abstraction—and the special intensity and poignance of the story is that Saint-Exupéry dramatizes the struggle against abstraction not as a philosophical subject but as a life-and-death story. The book moves from asteroid to desert, from fable and comedy to enigmatic tragedy, in order to make one recurrent point: You can’t love roses. You can only love a rose.

For all of the Prince’s journey is a journey of exile, like Saint-Exupéry’s, away from generic experience towards the eroticism of the particular flower. To be responsible for his rose, the Prince learns, is to see it as it really is, in all its fragility and vanity—indeed, in all its utter commonness!—without loving it less for being so fragile. The persistent triumph of specific experience can be found in something as idiosyncratic and bizarre as the opening image of a boa constrictor swallowing an elephant, which, the narrator tells us, the grownups can only see as a generic object. (This is where Saint-Ex and the Surrealists who admired him—a tracing of his hand appears in one of the issues of the Surrealist journal Minotaur—touch. Rene Magritte’s paintings, with their very similar obsession with middle-class hats, suggest that every time you see a bourgeois derby there may be a boa constrictor inside. The X-ray of every hat reveals a boa constrictor in every head. That could be the motto of every Surrealist exhibition.)

The men the Prince meets on his journey to Earth are all men who have, in Bloch’s sense, been reduced to functions. The Businessman, the Astronomer, even the poor Lamplighter, have become their occupations, and gone blind to the stars. It is, again, the essential movement we find in Camus, only in “The Little Prince” it is shown to us as comic fable rather than realistic novel. The world conspires to make us blind to its own workings; our real work is to see the world again.

A version of this essay first appeared, in French, in the magazine France-Amerique; it was also the subject of a lecture at the Morgan Library & Museum.
Posted by Mollydee55 at 9:17 PM