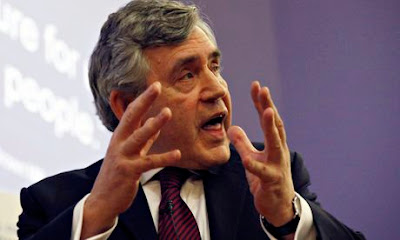 Sharing … Gordon Brown gives a speech at Glasgow University on behalf of the Better Together campaign. Photograph: Russell Cheyne/Reuters


Former prime minister Gordon Brown is to argue for "radical reform" in the union in a new book which will enlarge on his belief that Scotland should remain part of the UK.

Due to be published on 19 June, Brown's My Scotland, Our Britain will be "a considered contribution to the debate surrounding Scottish independence", said publisher Simon & Schuster, which has just acquired the title, and will move "beyond much of the coverage of what has so far proved to be an impassioned, yet often sensationalised picture of opposing sides".

"The main thrust is that we can live together politically in this wonderful United Kingdom, and both be strong nations within it," said publishing director Mike Jones, who acquired the book for Simon & Schuster. "That you don't lose a national identity within this arrangement, and that it is a mistake to think otherwise."

Brown will argue that rather than breaking up the union, instead there needs to be radical reform and "new power-sharing partnerships", so that "power-sharing, risk-sharing and resource-sharing" will give the Scottish parliament the "new decision-making authority it needs". The book will be subtitled: "A Future Worth Sharing".

"We sat down at the beginning of the year, and Gordon had already been writing," said Jones. "We discussed him entering the debate later in the year, and how important it was to him, and we agreed that a book, alongside speeches, etc, was a very good way of getting his message across."

Last week, the former prime minister used the platform of a speech at Glasgow University to claim that "for too long, the referendum debate has been presented as one side representing Scotland and the other side representing Britain", when in fact, "the real debate is between two Scottish visions of Scotland's future – the nationalist one based on the breaking of all political links with the UK and our vision based on a strong Scottish parliament backed up by a system of pooling and sharing risks and resources across the UK". Further speeches on the topic are planned for later in the year, said Jones.

In My Scotland, Our Britain, Brown will offer "a possibility for change, for unification without isolation and for a greater understanding of the factors that will enable a transition from division to collaborative cohesion", said Simon & Schuster. He will also write about his own experience growing up in Scotland, and as the MP for Kirkcaldy and Cowdenbeath.

Jones said Brown was "perfectly placed" to write the book. "I can't think of a better person to write about not only the situation at the present time but also possibilities for the future," said Jones. "It's a very personal book, very much from the heart."

Brown is, said Jones, "quite moving on everything that has been achieved as part of the union, and us all working together, and on this wonderful peaceful coexistence we've had for the past 300 years".

"He has some very interesting and innovative ideas as to how things should be moved forward - it's not just about maintaining the status quo."

Brown also has another new book in the pipeline – 2025: Shaping a New Future, in which he plans to show that "if the 20th century was the century of women's empowerment through ending women's exploitation, the 21st will be about a higher form of empowerment – women's leadership as a force for change". He has already published titles including Beyond the Crash: Overcoming the First Crisis of Globalisation, and his exploration of the lives of major 20th-century names including Martin Luther King and Nelson Mandela, Courage: Eight Portraits.
Posted by Mollydee55 at 3:45 PM