Thomas Piketty's Capital: Everything You Need to Know About the Surprise Bestseller

(from theguardian.com
by Paul Mason) 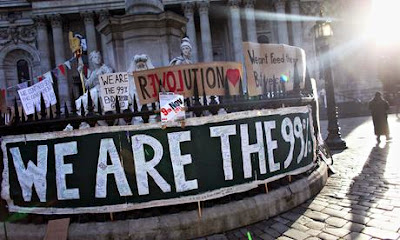 That capitalism is unfair has been said before. But it is the way Thomas Piketty says it – subtly but with relentless logic – that has sent rightwing economics into a frenzy, both here and in the US.

His book, Capital in the Twenty-first Century, has shot to the top of the Amazon bestseller list. Carrying it under your arm has, in certain latitudes of Manhattan, become the newest tool for making a social connection among young progressives. Meanwhile, he is been condemned as neo-Marxist by rightwing commentators. So why the fuss?

Piketty's argument is that, in an economy where the rate of return on capital outstrips the rate of growth, inherited wealth will always grow faster than earned wealth. So the fact that rich kids can swan aimlessly from gap year to internship to a job at father's bank/ministry/TV network – while the poor kids sweat into their barista uniforms – is not an accident: it is the system working normally.

If you get slow growth alongside better financial returns, then inherited wealth will, on average, "dominate wealth amassed from a lifetime's labour by a wide margin", says Piketty. Wealth will concentrate to levels incompatible with democracy, let alone social justice. Capitalism, in short, automatically creates levels of inequality that are unsustainable. The rising wealth of the 1% is neither a blip, nor rhetoric.

To understand why the mainstream finds this proposition so annoying, you have to understand that "distribution" – the polite name for inequality – was thought to be a closed subject. Simon Kuznets, the Belarussian émigré who became a major figure in American economics, used the available data to show that, while societies become more unequal in the first stages of industrialisation, inequality subsides as they achieve maturity. This "Kuznets Curve" had been accepted by most parts of the economics profession until Piketty and his collaborators produced the evidence that it is false.

In fact, the curve goes in exactly the opposite direction: capitalism started out unequal, flattened inequality for much of the 20th century, but is now headed back towards Dickensian levels of inequality worldwide.

Piketty accepts that the fruits of economic maturity – skills, training and education of the workforce – do promote greater equality. But they can be offset by a more fundamental tendency towards inequality, which is unleashed wherever demographics or low taxation or weak labour organisation allows it. Many of the book's 700 pages are spent marshalling the evidence that 21st-century capitalism is on a one-way journey towards inequality – unless we do something. 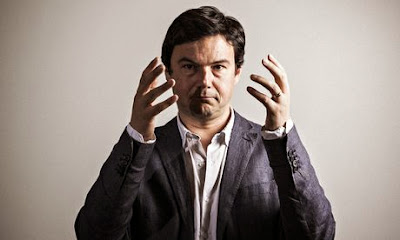 Thomas Piketty in his office in Paris. Photograph: Ed Alcock for the Guardian


If Piketty is right, there are big political implications, and the beauty of the book is that he never refrains from drawing them. Piketty's call for a "confiscatory" global tax on inherited wealth makes other supposedly radical economists look positively house-trained. He calls for an 80% tax on incomes above $500,000 a year in the US, assuring his readers there would be neither a flight of top execs to Canada nor a slowdown in growth, since the outcome would simply be to suppress such incomes.

While bestriding the macro-economic agenda, the book's sideswipes against trendy micro-economics, often in footnotes, read like a sustained in-joke against the generation for whom all problems seemed solved, except the street price of cocaine in Georgetown.

The book has, in addition, mesmerised the economics profession because of the way Piketty creates his own world, theoretically. He defines the two basic categories, wealth and income, broadly and confidently but in a way nobody had really bothered to before. The book's terms and explanations are utterly simple; with a myriad of historical data, Piketty reduces the story of capitalism to a clear narrative arc. To challenge his argument you have to reject the premises of it, not the working out.

From page one he illustrates with visceral reminders of the unfair world we live in: he begins with the Marikana mining massacre and he never lets up. He marshals not just 18th-century interest rates as evidence but also the work of Jane Austen and Honoré de Balzac. He uses both authors to illustrate how, by the early 19th century, it was logical to disdain work in favour of marrying into wealth. That it has become so again busts the central myth of, and moral justification for, capitalism: that wealth is generated by effort, ingenuity, work, wise investment, risk taking etc.

For Piketty, the long, mid-20th century period of rising equality was a blip, produced by the exigencies of war, the power of organised labour, the need for high taxation, and by demographics and technical innovation. 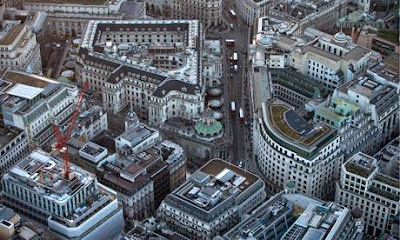 The Bank of England, standing in the heart of the City. Photograph: Bloomberg via Getty Images


Put crudely, if growth is high and the returns on capital can be suppressed, you can have a more equal capitalism. But, says Piketty, a repeat of the Keynesian era is unlikely: labour is too weak, technological innovation too slow, the global power of capital too great. In addition, the legitimacy of this unequal system is high: because it has found ways to spread the wealth down to the managerial class in a way the early 19th century did not.

If he is right, the implications for capitalism are utterly negative: we face a low-growth capitalism, combined with high levels of inequality and low levels of social mobility. If you are not born into wealth to start with, life, for even for the best educated, will be like Jane Eyre without Mr Rochester.

Is Piketty the new Karl Marx? Anybody who has read the latter will know he is not. Marx's critique of capitalism was not about distribution but production: for Marx it was not rising inequality but a breakdown in the profit mechanism that drove the system towards its end. Where Marx saw social relationships – between labour and managers, factory owners and the landed aristocracy – Piketty sees only social categories: wealth and income. Marxist economics lives in a world where the inner tendencies of capitalism are belied by its surface experience. Piketty's world is of concrete historical data only. So the charges of soft Marxism are completely misplaced.

Piketty has, more accurately, placed an unexploded bomb within mainstream, classical economics. If the underlying cause of the 2008 bank catastrophe was falling incomes alongside rising financial wealth then, says Piketty, these were no accident: no product of lax regulation or simple greed. The crisis is the product of the system working normally, and we should expect more.

One of the most compelling chapters is Piketty's discussion of the near-universal rise of what he calls the "social state". The relentless growth in the proportion of national income consumed by the state, spent on universal services, pensions and benefits, he argues, is an irreversible feature of modern capitalism. He notes that redistribution has become a question of "rights to" things – healthcare and pensions – rather than simply a problem of taxation rates. His solution is a specific, progressive tax on private wealth: an exceptional tax on capital, possibly combined with the overt use of inflation.

The policy logic for the left is clear. For much of the 20th century, redistribution was handled through taxes on income. In the 21st century, any party that wants to redistribute would have to confiscate wealth, not just income.

You would expect the Wall Street Journal to dissent, but the power of Piketty's work is that it also challenges the narrative of the centre-left under globalisation, which believed upskilling the workforce, combined with mild redistribution, would promote social justice. This, Piketty demonstrates, is mistaken. All that social democracy and liberalism can produce, with their current policies, is the oligarch's yacht co-existing with the food bank for ever.

Piketty's Capital, unlike Marx's Capital, contains solutions possible on the terrain of capitalism itself: the 15% tax on capital, the 80% tax on high incomes, enforced transparency for all bank transactions, overt use of inflation to redistribute wealth downwards. He calls some of them "utopian" and he is right. It is easier to imagine capitalism collapsing than the elite consenting to them.

Paul Mason is culture and digital editor of Channel 4 News. His book Postcapitalism will be published by Penguin in early 2015.
Posted by Mollydee55 at 10:04 PM