Within the walls of a centuries-old building lies the magical Library of Illumination, a place where books literally come to life. 17-year-old Johanna Charette is the youngest curator ever chosen to oversee the day-to-day operation of the library and she knows, in case of trouble, having an assistant can be invaluable, so she hires 16-year-old Jackson Roth to give her a hand. Jackson gets off to a rocky start, but manages to prove his mettle. Besides, he’s kind of cute and a lot of fun.

Johanna is charming and brilliant—and a natural born leader. She keeps the library operating on an even keel. Jackson is clever and intrepid. He relies on his wits to keep them out of danger when trouble arises. Unfortunately, his derring-do is one of the reasons why they sometimes find themselves in awkward situations. So it shouldn’t be any surprise when his wanton curiosity sparks a journey to a distant realm, where they end up with front row seats in a battle against an ancient foe.

“What’s this? Jackson asked, picking up a book that sat by itself on a bottom shelf. A thick layer of dust obscured the cover. “Did you leave this book down here?”

He opened the book to a random page to see what it was about. Dracula suddenly loomed over him, blood dripping from his mouth. “Uhhh ...!” Jackson’s scream did not get past his throat.

Dracula moved in for the kill. The teen managed to slam the book shut just as the vampire’s teeth made contact with his skin.

“What are you doing?” Johanna poked her head around the corner of the shelf and spotted the blood on Jackson’s neck. She looked down and recognized the volume of Dracula by Bram Stoker and winced. “We must have missed that one. Are you all right?”

Jackson swiped at his neck.

“Come with me.” Johanna led him to the circulation desk. She took out a first-aid kit and cleaned away the blood with an antiseptic wipe.

“It’s just a surface wound.” She wrapped the bloody wipe in a tissue and threw it in the wastebasket. “You’re going to live ... but not forever.”

Jackson sighed with relief. “You know, when my mother used to patch me up, she would kiss it to make it better.” He raised his eyebrows and grinned at her.

“If you got hurt working for Larry at Once A-Pawn A Time, would you ask him to kiss it to make it better?”

“You really know how to hurt me.”

Johanna laughed. She leaned in and lightly kissed Jackson’s neck.

He could feel the hairs along his nape tingle.

“All better?” she asked. 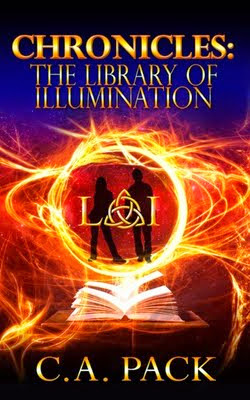 C. A. PACK, author of Code Name: Evangeline, Evangeline’s Ghost, and the Library of Illumination novelettes, is an award-winning journalist and former television news anchor/writer from Long Island, New York.

There is a release blitz giveaway of a $25.00 Amazon gift card. Simply click the following link and follow the instructions to enter: http://www.rafflecopter.com/rafl/share-code/YWNlNjJiNDFhODkyOTRhYWU1ZmMyM2VjZmRkZDExOjA=/