The Beasts Inside The Hiss

(from buzzfeed.com
by Joshua Mohr) 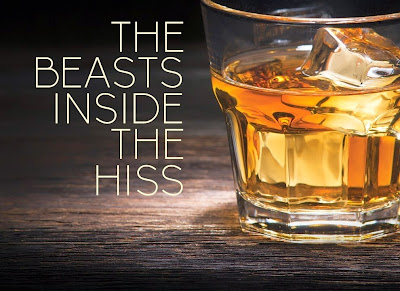 My ghostwriters were drugs.

That’s how I worked.

I sat down around midnight armed with booze and blow — sometimes opiates, maybe a horse tranquilizer. I wrote and wrote and pretty soon the Jameson bottle dwindled and I’d black out, but keep writing until the sun came up.

It’s been five years and a few novels written sober since then, and looking back, I’m reminded of the Brothers Grimm. They told a story about a cobbler who needed help making his inventory and by some wondrous chance a couple of elves showed up in the middle of the night and built him some kickass shoes.

I worked the same way with alcohol and drugs, and my whiskey elves, my beasts, never disappointed. I mean, they didn’t always write the prettiest prose — cocaine isn’t known to instill poetry — but they usually unearthed interesting images and haunting motifs. It was completely sub/unconscious writing, with me having no idea what’d I’d done until I read the pages the next morning.

My first novel, Some Things that Meant the World to Me, was written that way. It came out in June 2009. I got out of rehab in February of that year, which meant I was brand-spanking sober for my first book tour.

I was nervous about being on the road, on my own, and felt unequipped to handle temptation, especially being around other authors. Especially ones I’d long admired.

Like Joe Meno. He wrote one of my favorite books, Hairstyles of the Damned. Joe was an indie lit rock star and one of my main influences on the page. He and I were scheduled to read together at Powell’s Books in Portland. A magazine had asked me to interview Meno about his new novel. We decided to have dinner before the event.

So I was anxious.

Which really meant fidgety and sweaty.

It was one of those bistro pubs, all mahogany and burgundy and brass, sort of like what I imagine dining on the Titanic to be like.

Joe and I took a seat, and a server said, “Can I start you with cocktails?”

It slipped from my mouth so effortlessly, an actor reciting a line well into a show’s run, tongue trained in muscle memory to enunciate so every seat could hear.

I was so preoccupied with the fact I’d just ordered a cocktail it was all I could think about. All I did for the next few minutes was loop that decision.

The server returned. Joe picked up his drink and said, “Cheers,” and I held mine and said the same and we let our squat glasses touch and he had a taste of his and I excused myself to the bathroom to splash water on my face.

Don’t be stupid. Don’t be proud. Don’t be naïve. Just tell him you don’t drink.

But I wanted to sip that drink. I wanted to sip an army of drinks; I would have drank the spills and sludge from one of the bar’s floor mats if I could, and that was what happened to a grim brother, not an official Brother Grimm, mind you — with their strudel stories and charmed lives — no, I was just one grim brother in the city of roses with a dragon perched on his bistro table trying to drown him in bourbon while he did his best to pull it together in the bathroom because he had to be back out there soon, couldn’t hide in here forever, no chance, he had to go back out there and fight that dragon, because that was what happened at the end of fairy tales, heroes fought their enemies, heroes bested their adversaries. None of those tales ended with a hero hiding in the john dodging the showdown.

“Or you could take that drink.”

My whiskey elves. My ghostwriters. My beasts. In that pub’s bathroom with me, perched, one on each of my shoulders, as I leaned down to splash water on my face, heart cranking. Their heavy claws digging into my skin. Their feral wide eyes fixed right on me. Their rabid jaws snapping as they made a terrible mewling noise.

All the shrill squawks morphed into syllables and the beasts started making sense, telling me that this ridiculous sobriety of mine could be over, thank the lord, we could get back to doing what we knew how to do. We could stop pretending that we were something we were not, we could disappear back to the bottom, lay on the floor like ecstatic road kill, forgotten and splattered and dead.

“We wouldn’t be here if you did,” they said.

They steered me back to the table like the worst designated drivers in the world, and Meno said, “You all good?” and I said, “My stomach,” and he made a face like that sucks, and I was in my chair and I looked at the table and saw that bourbon and soda, saw my enemy, saw my dragon, and picked it up.

A glass of fire in my hand.

The smell of Maker’s, that peanut and caramel scent.

The smell of sanctuary.

A quick tip of the wrist and I would be home again.

One of the beasts said, “Down the hatch!”

And Meno said, “Should we start the interview?”

And the other beast said, “Down the hatch is code for drink your drink.”

And Meno said, “We have to be at Powell’s in about an hour.”

And I just died there.

That there could be a future without booze felt impossible.

That I could do the right thing felt impossible.

That I could amount to anything more than a drunk felt impossible.

That I should expect anything other than relapse felt ridiculous.

That I could clutch a glass of bourbon.

That I could keep this stupid secret rather than just saying, “Joe, I don’t drink.”

That I felt so ashamed of being sober.

I was willing to risk it all.

That there was any hope that my once upon a time could lead anywhere but back to the bottom.

That there was any hope with a drink in my hand.

That there was any hope.
…
But I could put the drink down.

I could put the drink down and turn on the Dictaphone.

I could put the drink down and turn on the Dictaphone and ask Joe questions.

I could say to Meno, “Where should we begin?”

I could live, not live happily ever after, but just the first word.
Just live.

I set the bourbon back on the table and started our interview.

“Where should we begin?”

I just checked my Dictaphone, and the interview with Joe Meno is still on there. I listened to the whole thing right now. About 45 minutes of conversation. Two writers talking shop, bullshitting about books. Normal.

Not sure what I was expecting, some sort of horror movie soundtrack? Shrieks. Pleads. The terrible mewling of my beasts as the dragon attempted to claw its way into my body. I expected there to be clues of how close I came to ruining my life, but the tape held no evidence.

There were no noises of my almost-relapse. You couldn’t hear any of the night’s true chaos, because it all happened in my skull.
It reminds me of a day, before I had left rehab, when somebody said, “The biggest battles of my life have been fought in my mind. Fought with myself.”

And what does that sound like on a Dictaphone?

Nothing. Dead air. The sound of deep space.

No one hears the wars in your head. Except you.

So you keep that Dictaphone recording, and you listen to it because you know what’s really there. Because you know that your beasts lives inside the hiss.

***
Joshua Mohr is the author of four novels, including Damascus, which the New York Times called “Beat-poet cool.” He’s also written Some Things that Meant the World to Me, one of O Magazine’s Top 10 reads of 2009 and a San Francisco Chronicle best-seller, as well as Termite Parade, an Editors’ Choice on the New York Times Best Seller List. He lives in San Francisco and teaches in the MFA program at USF. His latest novel is Fight Song.
Posted by Mollydee55 at 5:14 PM