Video: Shooting the Cover of 'Deep Blue' by Jennifer Donnelly 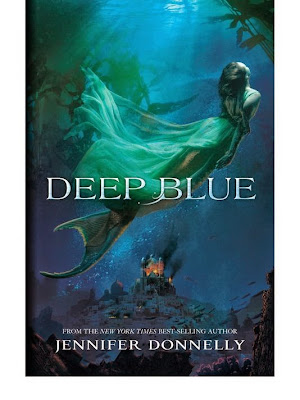 
Ever wonder what a photo shoot might look like for a book that features a mermaid heroine? Find out with this video of the shoot for the cover of Deep Blue (May 6), book one in the Waterfire Saga series, by Jennifer Donnelly.

The photographers are Roberto Falck and Rachel Elkind of Roberto Falck Photography. And the models are Caitlin (who's featured on the final cover) and Jitka.

Bonus info: Hollywood Records is releasing the song featured in the video on an upcoming album by Bea Miller, a former finalist on The X Factor. Bea also narrates the audio book of Deep Blue.
Here's the blurb about Deep Blue (courtesy of publisher Disney-Hyperion):

Deep in the ocean, in a world not so different from our own, live the merpeople. Their communities are spread throughout the oceans, seas, and freshwaters all over the globe.

When Serafina, a mermaid of the Mediterranean Sea, awakens on the morning of her betrothal, her biggest worry should be winning the love of handsome Prince Mahdi. And yet Sera finds herself haunted by strange dreams that foretell the return of an ancient evil. Her dark premonitions are confirmed when an assassin's arrow poisons Sera's mother. Now, Serafina must embark on a quest to find the assassin's master and prevent a war between the Mer nations. Led only by her shadowy dreams, Sera searches for five other mermaid heroines who are scattered across the six seas. Together, they will form an unbreakable bond of sisterhood and uncover a conspiracy that threatens their world's very existence.

Find out more about the book and series at waterfiresaga.com and jenniferdonnelly.com.