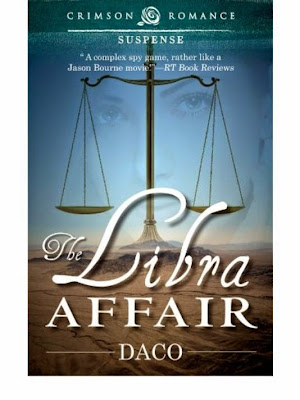 
Daco Auffenorde, a lawyer in Alabama and author of The Libra Affair (writing as Daco), explores why so many lawyers become romance authors ...

In Alabama, where I practice law, there are working attorneys who spend countless hours creating masterpieces of romance fiction. Lexi George of Montgomery, a criminal appellate attorney for the state of Alabama, has made her mark in the romance world, spinning paranormal stories of demon hunters down South. Heather Leonard, a private practice civil rights attorney, writes paranormal and urban fantasy stories about magical creatures wreaking havoc in the streets of Birmingham. And I'm a personal injury and employment law attorney who writes under the name Daco, authoring romantic suspense novels about a female CIA spy, as well as humorous contemporary romance.

Why do so many lawyers write in the romance genre? For one thing, the genre is popular. In 2012, romance fiction generated $1.438 billion in sales, which translated into 16.7% — the largest share — of the U.S. consumer book market, according to Business of Consumer Book Publishing. In 2011, sales reached $1.336 billion. Estimated sales for 2013 are $1.350 billion, according to the Romance Writers of America.

There's another reason why lawyers become romance novelists. Like the practice of law, romance fiction explores diverse and fascinating subject areas. But unlike the law, writing fiction provides a creative outlet without boundaries. One need only browse the bookstores, both physical and virtual, to find the shelves stocked with romance novels ready to take one on a wonderful journey. There's bound to be a story for everyone: a newly created paranormal world; a romantic suspense filled with crime, spies, or serial killers; a historical romance recounting the loves of English lords and ladies; a steamy erotic romance; a light contemporary romance reminiscent of a Meg Ryan movie. Romance genres stretch as far as the imagination dares venture. Take, for instance, vampires in Jane Austen's Pride and Prejudice … really? Yet, it works.

Romance literature follows the structure of the classical Greek three-act play, says Michael Hauge, author of Writing Screenplays that Sell. And strangely, so do lawsuits. All stories may end with a happily-ever-after, but as soon as the reader hits page one, it's game-on, just as if a lawsuit had been filed. The first quarter of a romance novel is Act I, or the setup. The characters and their worlds are introduced, and dramatic conflicts begin to emerge.

The same is true when an attorney files a complaint — she learns about the witnesses (characters) and the facts (plot) and analyzes the conflict. Act II comprises the second and third quarters of the novel. In Act II, confrontation occurs, the action rises, and the stakes get higher. Similarly, in "Act II" of a lawsuit, the attorneys delve more deeply into the facts (rising action), engage in discovery battles (confrontation), and bring pretrial motions that might dispose of the case (higher stakes). In the last quarter of a novel, Act III, the overarching conflicts are resolved, and the story winds down to a conclusion — and that's exactly what happens when a legal case finally goes to trial.

Lawyer-authors have helped shape contemporary romance fiction. For example, with so many female lawyers writing romance fiction, it's not surprising that the heroine is often a strong woman. Gone with the wind are the days when the only available stories are love-swept, fanciful romances where the Rhett Butlers of the world clash with the sassy but helpless Scarlett O'Haras. In the contemporary romance novel, the heroine's character arc is as fully developed as the hero's. It's what employment lawyers fight for — equal pay for equal work.

We attorneys are drawn to the law for the most fundamental of reasons, reasons that strike at the core of our humanity — justice, fairness, equality. Those of us who write romance novels realize life is a love story.

Daco S. Auffenorde practices law in Huntsville, Ala. The Libra Affair, her debut romantic suspense under the pen name Daco, came out last year. The sequel, The Scorpion Affair, is in the works. To learn more about Daco, you can visit her at www.authordaco.com.
Posted by Mollydee55 at 2:30 PM