Artists Band Together To Protest British Ban on Books For Prisoners

(from nydailynews.com
by Margeret Eby) 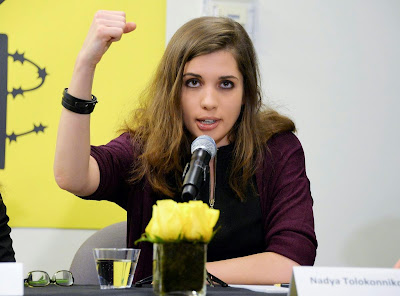 Tolokonnikova, along with a group of international journalists, wrote open letters about the value of reading and receiving books in prison.

“Books make up your entire world when you are a prisoner,” Tolokonnikova, who was incarcerated for over a year after she and her anti-Putinist punk rock group were convicted of hooliganism, wrote. “Because you have books you know that every day you spend behind bars is not a day spent in vain…Prison is probably one of the most text-centric places in this, our contemporary reality.”

The writers in the campaign, including Nigerian journalist Kunle Ajibade and Cameroonian poet Enoh Meyomasse, wrote their letters to coincide with World Book Night on April 23. English PEN and the Howard League for Penal Reform are spearheading the protest.

The shift in British prison policy, instituted in November, prevents prisoners from receiving packages from the outside, including books, magazines, and clothing.

The policy has been widely criticized by British literary figures, including authors Ian McEwan and Salman Rushdie and poet laureate Carol Ann Duffy.