(from usatoday.com
by Whitney Matheson) 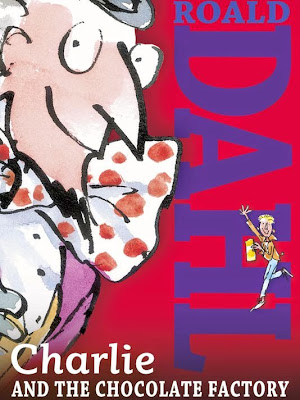 This year marks the 50th anniversary of Roald Dahl's Charlie and the Chocolate Factory, a story that only gets more delectable with age.

To mark the occasion, Penguin Young Readers Group is planning a yearlong celebration that includes, of course, a "Golden Ticket Sweepstakes".
Launched today, the contest will award five winners a trip to New York, a year's supply of chocolate and $5,000 of books donated to their school libraries. Anniversary editions of Charlie are also in stores.

Recently I had the pleasure of speaking with Dahl's grandson, Luke Kelly, about the milestone. Kelly oversees the Roald Dahl Literary Estate and, as you'll learn, is full of fascinating facts about his late grandfather's work:

Me: Luke, do you remember the first time you read Charlie and the Chocolate Factory?

Luke: It's such a part of my life that I can't remember not being aware of it. The house was filled with chocolate and aspects of the stories, and Roald had such a Wonka quality about him that it's not something I remember being without.

What kind of relationship did you have with your grandfather?

I was young, so I only have a few particular memories of him. I remember him at my fifth birthday party. ... I also grew up at Gipsy House, and there's a huge sense of him in every room. There's a lot of amazing chocolate and candy stuff around, there's an old gypsy caravan in the garden, there's the tree Mr. Fox is supposed to live under. All sorts of weird antiquities and ideas all over the place.

The kids who were my mother's age got to hear James and the Giant Peach for the first time and Charlie for the first time. My mother, in fact, was part of the publishing of it — it didn't get published in the UK until a number of years after the U.S., and it only got published because my mother gave it to one of her childhood friends, whose father was a publisher.

Now, was chocolate something your grandfather always loved, or did that just show up in the house after the book became so successful?

Oh, he was a massive chocolate lover. When he was at school, he was a chocolate taster for Cadbury. He used to get sent these packages that were just experimental bars. The kids would taste them, write notes and send them back.

He wrote this great chapter in his cookbook on the history of chocolate and how, when he was young, it was kind of a golden age of chocolate; all of these chocolate bars we have today were all being invented. So that kind of seeped into the whole idea of Wonka.

He had this Kit Kat wrapper ball — it was made from him literally compacting all his wrappers, and it became this big thing that sat next to him where he'd write all his stories. Next to his bed, he had this glass jar of wine gums, so he'd be able to reach his hand in and get sweets in the middle of the night! And (after) every meal, we had this red Tupperware box filled with chocolate that would go around the table.

Fifty years after its publication, kids are still discovering the book. What makes Charlie so timeless?

I think it's a combination of things: In a way, it's a classic fairytale, but it's incredibly fresh and inventive. The language is remarkable but also quite spare; it speaks directly to kids in a way (books) didn't in the '60s. And it's so prescient in terms of it being a warning about technology and all these things, but it's not too serious.

You throw in chocolate and things like Oompa Loompas, and it's so layered but, at the same time, quite pure and simple.

Note: To enter the sweepstakes and learn more about this year's Charlie-themed festivities, head to roalddahl.com.


Blogger's comment: I love this idea! What a wonderful prize. I hope there is, with ebooks and all of that, a new generation of kids that love Roald Dahl. What is your first memory of him and his books? I would love if you commented below.

My uncle was in the army and he left when I was three. I was an only child so I was the favorite. I was a reader even at that age so my uncle moved around a lot but he always sent me books. He sent me other really cool things from his travels but he never forgot a book. I will never forget the first time he sent me Charlie and the Chocolate Factory. I was in second grade. It was my favorite book at the time and well worn years later. I remember getting James and the Giant Peach and a lot of books by Jean Shepherd. But Charlie was always a favorite and when the movie came out! WOW! I loved that my uncle loved me enough to send me books because he knew what a deep love I had for them. I wish I had the original. It is probably worth a lot now.

Again, I would love if you had a story to share about Charlie and the Chocolate Factory.