Those who decide to use leisure as a means of mental development, who love good music, good books, good pictures, good plays, good company, good conversation - what are they? They are the happiest people in the world.
-William Lyon Phelps

BE CAREFUL WHAT YOU WISH FOR
by Jeffrey Archer

As Archer covers the family drama from 1957 to ’64, Harry Clifton—a married-into-money war hero and best-selling crime writer—is relegated to supporting player while his wife, Emma Barrington Clifton, steps to center stage. Emma becomes chairman of her family shipping company when the former leader’s pet project—the construction of a luxury liner—runs aground; it was sabotaged during construction in Belfast by family enemy and Nazi-sympathizing Argentinian gangster Don Pedro Martinez in alliance with the IRA. Martinez hates the Barrington-Cliftons since they disrupted his plans to dispose of millions in Nazi counterfeit money, as recounted in Volume 3. Here, in the prologue, it's revealed that Martinez's attempt to kill Sebastian Clifton, Harry and Emma’s son, in revenge for that loss resulted in the death of his own son. As Emma assumes leadership of Barrington Shipping, Martinez secures a significant stake and begins a scheme to sink the company. A minor storyline follows Sir Giles, Emma’s brother, and his Labor Party political ambitions. Archer introduces two new supporting players: Cedric Hardcastle, a banker who takes a shine to Sebastian, and Robert—"No one calls me Mr. Bingham except the taxman"—Bingham, a heart-of-gold fish paste–manufacturing millionaire. Hardcastle and Bingham join a complex scheme to manipulate the Barrington stock price in order to bankrupt the Argentinian. Archer cranks up the melodrama with an unexpected suicide and shows an insider’s flare for great food, wine, art and architecture. It's only Sebastian who’s the subject of any character development, growing from indifferent student to Hardcastle's trusted assistant, all while meeting an ambassador’s daughter who becomes his bride-to-be. Archer’s unremarkable prose but tight plotting make for a page-turning rich man’s soap opera. He concludes with a Perils of Pauline supercliffhanger certain to frustrate—and create clamor for Clifton-Barrington No. 5. 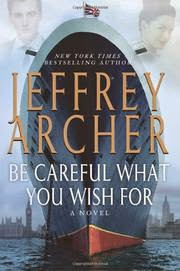