Poem of the Week: Present Tense by Michael Schmidt

(from theguardian.com
Carol Ruman's Poem of the Week) 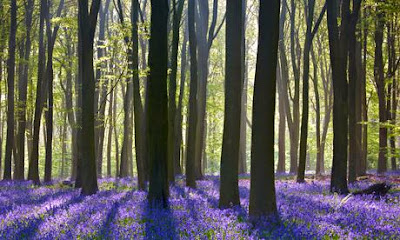 Fifty shades of blue … 'alone he hugs his knees, among forget-me-not, bluebell and campion'. Photograph: Alamy


Resurrection takes various forms in this week's poem, Present Tense, from Stories of My Life by Michael Schmidt. In the opening lines, it's an organic recycling, begun by worms and helped by the digestive processes of other small industrious creatures. The geographical dimension of bodily decomposition ("north and south") recalls John Donne's sermon on Job 19:26: "Shall I imagine a difficulty in my body … because I have lost an Arme in the East and a leg in the West … some bloud in the North and some bones in the South?" But here there's nothing distressed or macabre in this. A calmly regular trimeter pulse helps the process seem natural and benign, while the verb "travels" lets light into underground darkness. As for Donne, the bodily dispersal complicates, but in no way cancels, the promise of personal resurrection: "Christ will have to raise/ An entire field … "

There's also an Ovidian kind of metamorphosis that is central to the poem. The literalised concept of resurrection on judgment day ("an entire field") leads to the older, pagan image of woman as tree ("like Laura"). When Daphne was changed into a laurel tree in Metamorphosis, her first awareness began with finding "her feet benumb'd and fastened to the ground." So the woman in Schmidt's poem will "stand/ On trunks for feet and pray/ Like Laura turned to tree/ With bough and bloom …" The simile: "like Laura," leads, of course, to Petrarch, Number 23 of the Canzoniere, as well as to Ovid. At Apollo's decree, laurel provided the wreath for acclaimed poets and military victors. Is either profession significant to the old man?

He's a generic and hardly idealised wise, old man. When he "chews the air" in that striking first line, we see the involuntary mouth-movements of the very old, produced perhaps by the lonely habit of muttering to themselves. He could be in silent prayer or recitation, or trying to control his mourner's tears. With gently brisk future-tense optimism, however, the stanza unfolds towards the vision of the tree woman, an ethereal but natural presence, "… her grey/ Pupils made of dew/ Pulse a stammering breeze". Here, "stammering" becomes a visual as well as auditory effect, suggesting the shimmer and whisper of leaves. But this breeze is more: it forms her "pulse" and expresses her living restoration.

So she becomes present and present-tense to the old man. With lost time restored or re-entered, he is embraced ("again, ago"), and there's a perfect resolution, once more recalling John Donne, of "two climates, hemispheres." In the next verse paragraph, back in real time, we see the old man hugging his knees, sitting alone but rapt under the blossoming chestnut tree. Then, with the help of a bending branch, he seems to perform his own little resurrection and gets up. His splayed feet recall the rooted laurel and it's as if he, too, blends into the bridal tree. Plant names evoke a fertile and lovely spring scene, with the different shades of blue implied by bluebell and forget-me-not, the rich pink of the campion, and the fragrance of the chamomile (earth apple in Greek) somehow thickened by the "ch" spelling. These flora, like the earlier fauna, embody Laura too, and the dove, also female, gives her a wordless voice.

"Almost the scent is taste/ Almost the taste is touch." The parallel lines delicately reconstruct the strange transmissions of synaesthesia. Now the poem comes back to an earlier tactile exchange and the flow of blood through "ventricles". Orgasm and pledge combine in the imagined but intensely physical gesture: "She reaches like a hand/ And closes on his heart." It seems to take us to the limits of fleshly reality available to imaginative re-creation.

The recovered woman is not only scent but also oxygen, not only a body but "grace immaterial". Living bodies interact by "reflex", now superceded by the richer, more complex noun "reflection" – not excluding, surely, the reflections and mirrorings of lyric poetry. External and internal rhyme sounds have been spangled informally through the poem, with a melodious and true-to-life unpredictability. At the end, the air the old man chews has itself changed; it is "given" and, in a renewed religious symbolism, perhaps suggesting the last sacrament, "feeds him like a host." This 21st-century narrative reshapes the secular Elizabethan May-time lyric, blending imagination, memory, religion and science into a resurrection that's also procreation and a natural part of spring's easy vitality: "A sweet time this, to be/ Alive and unalone." Only that subtly negative adjective, "unalone", hints at how incomplete the connection is and at the old man's continuing solitude.

The old man chews the air.
Under the ground his bride
Travels north and south
Transmitted by the worms,
Moles that scrabble through,
Maggot, vole and shrew.
When resurrection comes
Christ will have to raise
An entire field, she'll stand
On trunks for feet and pray
Like Laura turned to tree
With bough and bloom, her grey
Pupils made of dew,
Pulse a stammering breeze.

The old man senses her
And he is in her arms
Again, ago; both young
Exchange like ventricles,
Touch calling, answering touch,
Two climates, hemispheres,
Resolved in storm, in calm.

Under the chestnut's broad
Candled canopy
Clenched and comfortably
Alone he hugs his knees.
Among forget-me-not,
Bluebell and campion
He leans on a bending branch;
A smell of chamomile
Where his two feet are splayed
Rises from scuffed soil.

Then, into her dark leaves
Plump with the year, a flare,
A ring-dove: how she coos
Among the candles, light.
He listens to her voice,
Breathing the scented air.
Almost the scent is taste,
Almost the taste is touch.

His task is less than Christ's:
His resurrection comes
To him as oxygen,
The voice, the chamomile;
She reaches like a hand
And closes on his heart.
A sweet time, this, to be
Alive and unalone,
Grace immaterial –
Reflection, not reflex.
He chews the given air.
It feeds him like a host.

• Michael Schmidt will launch his new book, The Novel: A Biography (Harvard University Press) at Blackwell's, in Oxford, on 6 May.