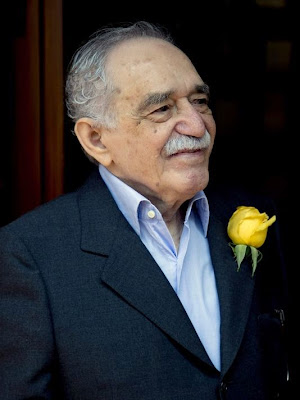 
Novelist Gabriel Garcia Marquez left behind an unpublished manuscript that he chose not to print while he was alive, an editor told the Associated Press on Tuesday as the writer's compatriots held a musical tribute to him in his native Colombia.

Cristobal Pera, editorial director of Penguin Random House Mexico, said that Garcia Marquez's family has not decided whether to allow the book to come out posthumously, or which publishing house would get the rights. Garcia Marquez died at his Mexico City home on April 17.

The manuscript has a working title of We'll See Each Other in August (En Agosto Nos Vemos).

An excerpt of the manuscript published in Spain's La Vanguardia newspaper contains what appears to be an opening chapter, describing a trip taken by a 50-ish married woman who visits her mother's grave on a tropical island every year. In the chapter, she has an affair with a man of about the same age at the hotel where she stays.

The manuscript apparently dates to about the time Garcia Marquez was writing his last novel, Memories of My Melancholy Whores, which was published in 2004, and deals with similar themes of forms of love; Garcia Marquez, beset by a failing memory, apparently did not write much in recent years.

"This has come as a surprise to me. The last time I talked to Gabo about this story it was a stand-alone which he was going to include in a book with three similar but independent stories," Martin said.

"Now they're talking about a series of episodes in which the woman turns up and has a different adventure each year," he wrote in an e-mail. "Obviously it makes sense and presumably Gabo really did play with it, presumably some years ago."

The Bogota Symphony Orchestra performed Mozart's Requiem in the capital's colonial-era cathedral, which was festooned with thousands of roses in yellow, the author's favorite color.

The ceremony also included a performance of the accordion-heavy vallenato music Garcia Marquez loved and which accompanied him in 1982 when he was awarded the Nobel prize for literature in Stockholm.

Around Colombia, a marathon public reading of Garcia Marquez's No One Writes to the Colonel is planned Wednesday at 1,400 public libraries. The Culture Ministry has distributed 12,000 copies of the book for the occasion.

Colombia's government also will unveil at a book fair next week details of a $100,000 literary prize bearing the author's name that will annually honor the best short story written in Spanish.

In Cuba, the state news agency Prensa Latina announced that this year's Havana Film Festival will be dedicated to the author.

Cuban state television broadcast images Tuesday of the white and yellow arrangement. "To a dear friend," read a silk sash.

Castro, who is largely out of sight in recent years, has not commented publicly on Garcia Marquez's passing.
Posted by Mollydee55 at 5:00 PM