(from theguardian.com
The Guardian Staff) 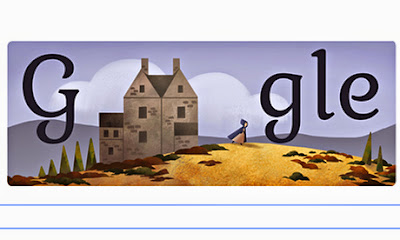 Google has celebrated the life of the English author of Jane Eyre, Charlotte Brontë, with a Google doodle.

The Brontës' father was an Irish clergyman who changed his name to Brontë from Brunty or Prunty. He sent his daughters to the Clergy Daughters' school in Lancashire where conditions were so bad that it led to the deaths of Charlotte's elder sisters, Maria and Elizabeth. The school was the inspiration for Lowood School in Jane Eyre. The remaining daughters were taken out of school but with their health damaged.

In 1847, Jane Eyre was published. It tells the story of Jane, who falls in love with her employer, Mr Rochester. The couple marry after Mrs Rochester dies in a house fire.


In 1854, Brontë married but died the next year during her first pregnancy.
Posted by Mollydee55 at 9:38 AM