I am so very happy to have J.A. Reynolds here today. I was lucky enough to sign up for a book tour for one of her books entitled Peaceful Genocide. I knew when I finished it I had to find out more about the characters and the author. Here is a little bit about J.A. Reynolds - Writer. Pseudo Super Hero. J.A. Reynolds lives in the Midwest with a normal family, raising a normal daughter, with some abnormal pets.

1. Why the title "Peaceful Genocide"?

Because it tells you about the story in a nutshell.  Seriously, though, I had originally called the story Perpetual Retention, but that was lame. One day my husband said “Peaceful Genocide” and I was like “YES THAT’S IT”.

2. What is a book you would want to write?

I would want to write any book that someone would want to read. Something different. Something thought-provoking. At any given moment I have like 10 ideas in my head and several more actually written down on paper. I would love to write each and every one of them, but time isn’t always on my side.

3. When did you decide to become a writer?

I’m a storyteller at heart, and I grew up in a family of storytellers. I had never even thought about writing, so I guess you could say writing kind of found me. My daughter has always been an avid reader and she used to bring home wonderful books that she would tell me all about. She asked me once if I could write a story just for her, and I thought, sure. And I did. Which brings me to your next question 

4.. I noticed that you have three books out. One is marked as sci-fi and the other description sounds like a sci-fi book. But your third (I do not know if that is in order) book, "Stolen Horse Dreams" sounded completely different. Is there a particular genre you like to write in?

Stolen Horse Dreams was the book I wrote for my daughter. Its middle grade fiction, and you’re right, it’s VERY different than my other two books. Peaceful Genocide is sci-fi and Crucible is more urban fantasy/horror (someone told me once that book needed a warning label…lol). I don’t like to write in particular genre, I like to write whatever story pops in my heads and refuses to leave. I actually have six romance books published under a pen name. Eclectic? That’s me!

5.. How did "Peaceful Genocide" form in your mind? I know I have mentioned this multiple times but I really loved the book and the concept was so fresh and new. For example did you know what you wanted to write about? Did you get the idea and know what to do or let the characters lead you?

I’m a panster (someone who doesn’t plan out books when they write), but Peaceful Genocide was the first (and only) book I’ve ever written a full synopsis for and plotted out before writing the actual book. It was new for me, but totally worked because the book (and the characters) were so much smarter than me. LoL. I had a strong idea how the story was going to go, but the characters have a way of making me tweak things. The story did change a little bit as I wrote, but the overall story arc is just as I pictured when I wrote that synopsis. Now that I think about it, that’s pretty shocking for me!

6.. In "Peaceful Genocide", I loved each of the four characters who were the project participants. But I loved how Deuce with his team attitude came more to rely on others and Mitzi being a loner had to learn teamwork. Did you intend that to happen or did your characters do that themselves so to speak? Were they supposed to learn a lesson or is it just what it is?

I set out to make them smart, bold (but each with their flaws), and for each of them to learn lessons from one another. I hope I did all of those things justice! I wrote this book and the characters with a purpose, but I think that every person gets something different out of the story and the characters.

Generally yes, but not always. It’s easier for me to write strong female characters, so that’s what I automatically go to when writing. Sometimes I have to restrain myself when working on a female that isn’t supposed to be like that.

8.. Are the characters in this book based on your self or anyone you know?

Nope. These characters all came from my imagination. I, personally, am not as smart as anyone in this book.

9.. Who are your greatest influences?

I’d have to say my daughter because I do everything I do for her.

10. Where do you like to write? For example a favorite desk in a writing room, out on your patio, or maybe a nearby park?

I can write anywhere it is completely SILENT. Like, no noise at all. And without interruptions. That kind of space is getting harder and harder to come by!

11 Must have snack/beverage when writing.

Nothing really. Just me, my computer, and my blank page and I’m happy.

Well, I’d like to say I’m working on the sequel for Peaceful Genocide, which is titled, Lethal Injection, but that story is proving more difficult by the second! I’ve got several stories “in the works” so to speak, but nothing that is taking hold and making sure I finish it. My husband recently put a little bug in my ear about a story I have titled, Now I lay me down, and it’s looks like it might be the one that takes hold.

13. Is there anything else you would like to add?

I love hearing from readers (or writers) so connect with me! You can find me on Facebook and Twitter, and of course through email.


I really loved all of your answers. Everything was clear and exactly what I was looking for. I would love to comment on each of them but then it would be my interview! I just want to say I love that you do so much for your daughter. I hope that she appreciates you. My mother and I are very close and you sounded like it could have been my mom talking about me in how you talk about your daughter and that is wonderful. Thank you so much for being here today. I am very excited about the multiple upcoming projects, especially a sequel to Peaceful Genocide (I like that title better too) and I know the people that read and loved this book would like to see that too. But you write well so I am sure I would enjoy anything by you.

Please stop by anytime for a guest blog or just to say hello. Thank you again for letting em interview you today. 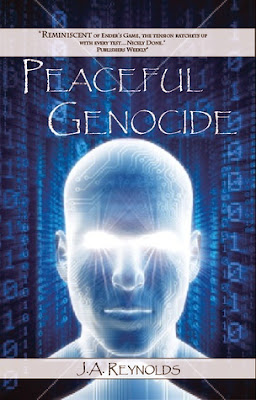