(from flavorwire.com
by Alison Herman) 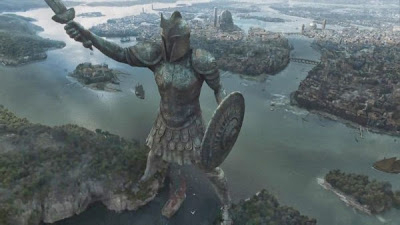 Technically, it’s the next A Song of Ice and Fire book. But with an audience supersized by the popularity of a certain HBO show that premieres its fourth season next week, the release of a sample chapter from George R.R. Martin’s upcoming The Winds of Winter was enough to break the author’s site for several hours. It’s brand-new material, never before heard at a reading or fan convention. We still don’t have a publication date yet — given the length of Martin’s books and his typical writing pace, we’ve likely still got a couple years to go — but this chapter’s enough to keep up our hopes that the wait will prove worth it. On to the overanalysis!

[Non-book readers: this is your obligatory MASSIVE SPOILER WARNING. Unless you want a good two seasons' worth of plot completely ruined, DON'T READ PAST THIS POINT. And please read the books. It makes watching the show even better, I promise.]

So, the chapter’s called “Mercy.” At first I was confused and thought Martin had made a mid-series pivot to giving segments actual titles and not just the names of characters. But as the photo above the chapter tells us, we’re in Braavos, the far-north Free City that’s home to a giant Titan statue, the Iron Bank, merchants, swordsmen… and the Faceless Men. We’re in the company of the Artist Formerly Known as Arya Stark, who’s currently in training as an acolyte of the God of Many Faces. As we learned in A Dance with Dragons, the Faceless Men are more than the world’s best (and most expensive) assassins’ guild — they’re a religious order, granting the “gift” of death to, or on behalf of, whoever comes to them.

The problems inherent in a murderous little girl attempting to join up with the Faceless Men have been apparent for a while. Arya has no problem killing people, obviously; her version of prayer is reciting the names of those she’d like to see dead before she goes to sleep. So dealing death for a living should be her dream job, right? Unfortunately, being a Faceless Man necessitates stripping away one’s identity; an acolyte becomes no one so they can be anyone they need to be.

That’s not something Arya, a girl with a traumatic past and a deep-seated desire for revenge, can do easily. It’s made even more difficult by Arya’s status as a warg, an ability to slip into the minds of animals that she shares with her younger brother Bran. Just as Bran is able to possess his direwolf Summer, Arya assumes the consciousness of Nymeria when she falls asleep. (She’s not limited to her former pet, though; back when she was blind, she was able to use a cat’s sight.) Her ties to Nymeria, which she’s retained ever since she was forced to drive her off way back in A Game of Thrones, keep her anchored to Westeros. “Mercy” begins with Arya waking up from yet another wolf dream.

“Mercy” is, of course, the name of Arya’s current identity. An apprentice with a group of actors, Mercy is unassertive, if highly competent. She’s a poor native Braavosi with no agenda besides serving Izembaro, the head of the mummer’s troupe at The Gate playhouse. They’re staging a production of what appears to be the ASoIaF version of Shakespeare, in which Mercy has her first-ever speaking part: getting raped on stage by the troupe’s token dwarf. Exciting!

All goes smoothly until an envoy from Westeros shows up in the company of Raff the Sweetling. One of Gregor Clegane’s sadistic henchmen, Raff’s been on Arya’s shit list since draft one. Mercy’s never heard of Raff — she doesn’t even speak the Westerosi language — and in two minutes flat, Mercy is dead. There’s only Arya, a very angry orphan with a massive grudge. “Give it up or go ahead,” Arya tells herself. But she’s incapable of letting go of her past, and that spells trouble for her future as a Faceless Man.

We leave Arya as she prepares to go onstage, then dispose of Raff’s body in the canal. It probably won’t be long before her mentor, the Kindly Man, figures out what went down. So will The Winds of Winter see Arya kicked out of the order? Will she finally figure out that her dreams aren’t just dreams? Will she and Daenerys and Tyrion (who gets a brief mention here) ride into Westeros on dragonback, roast Cersei alive, and take what is theirs with fire and blood? Only time, and years of frenzied anticipation, will tell!