Book News: Meg Wolitzer To Publish A YA Novel Inspired By Sylvia Plath


Meg Wolitzer, author of The Interestings, is coming out with a young adult novel called Belzhar (a play on Sylvia Plath's The Bell Jar). It's set to be published by Dutton Children's Books, an imprint of Penguin, on Sept. 30. Dutton says that Belzhar "is the story of Jam Gallahue, who-after tragically losing her boyfriend, Reeve-has been sent to The Wooden Barn, a therapeutic boarding school in rural Vermont for "emotionally fragile, highly intelligent" teens. There, Jam is placed in an exclusive, mysterious class (Special Topics in English), where the students read only one writer; this semester, that writer is Sylvia Plath. A journal-writing assignment leads Jam and her classmates into a miraculous world they call Belzhar, where the past is restored and Jam can feel Reeve's arms around her once again."

Wolitzer spoke to NPR by email about her new book, the "the longings and humiliations" of adolescence, Sylvia Plath's The Bell Jar, and ice cream sundaes:

Why have you decided to write a YA novel, and why now? Is this going to be a one-off foray into YA novels, or is this a more permanent direction you're taking?

Adolescence was definitely in the air, or at least in my brain, around the time I decided to write this book. Not only did I have a teenager at home, but I was also soon going to be publishing a novel for adults (The Interestings )which begins when the main characters are fifteen. I found that I still thought of various sensations and images from my own adolescence: the longings and humiliations and even the lemon-scented shampoo. I know this isn't unusual; I remember that long ago, my mother had taped a little interview with her own mother, who was in her eighties at the time. In response to a question about how old she really felt inside, my grandmother replied, "Sixteen." Sixteen! That really got to me. My wonderful grandmother — someone who'd always been an über-grandma, seemingly born with white hair and dentures and an apron, and who was perennially monitoring a hot stove in a tiny kitchen — still felt like a young, vital teenaged girl inside. For me, plunging through middle age now but often looking back, and of course also looking around me at my kids and their friends, so much of what adolescents feel seems set in relief, and much of what they experience is happening to them for the first time. As a writer, my antennae perk up at all that. I'm working on another adult novel right now, but I really loved writing for younger readers, and I hope to again.

For you, what is the difference between a YA novel and a novel for adults?

There seems to be real immediacy in some of the YA books I've read. I suppose I tend to be a bit more language-focused in my adult novels; I will allow myself to linger in a passage, playing with it and letting it twirl around awhile in a way that I wouldn't have felt was instinctively right for Belzhar, particularly because it's in first-person, and in this case the narrator really wants and needs to get her experiences told now, and understood. Of course, language matters in both types of books (and I know there's a lot of overlap in terms of who reads what). For me, a satisfying novel, whether it's intended for teenagers or adults, or both, usually has a clear imperative, and is populated by characters we come to know very well. (Case in point, I just re-read Carson McCullers's brilliant The Member of the Wedding, which is so deep and powerful about a young person trying to find out where she belongs.) And at the end of any satisfying novel, the reader probably feels: oh, I really know the way this writer thinks and describes things; I know this world.

I'm very intrigued by the focus on Sylvia Plath. Can you share a bit more about how she plays into the book?

Sure. My narrator is a sixteen-year-old girl named Jam Gallahue who's dealing with a tragic loss. She's sent to a boarding school in Vermont for "emotionally fragile, highly intelligent" teenagers. While there, she is put into a tiny, elite class that reads only one writer a semester. And this semester the class is reading Sylvia Plath. Plath's work, and her emotional problems, not to mention her journal-writing, take on important dimensions for all the students in the class, who are also asked to write in their own journals, and who, when they do, experience something startling.

Is it correct to say that Belzhar is a kind of alternate universe? Have you experimented with fantastic elements before, or is this the first time?

Yes, I guess it can be described as a kind of alternate universe in which the person (or thing) they've lost is returned to them. The fantasy is fairly lightly handled (I hope), and to my thinking somewhat metaphorical. It's about having unmet needs met, about getting rid of the ache of loss. I also employed a very light drift of fantasy in my adult novel The Uncoupling, as well as in a book for middle-grade readers about kids who meet at a Scrabble tournament, called The Fingertips of Duncan Dorfman. (I remember comparing the level of fantasy in Duncan Dorfman to the amount of fudge running through one of those ice cream sundae cups we ate as kids: a very light vein, a suggestive and necessary ripple.)

Where does the word "Belzhar" come from? (Is it by chance related to 'Bell Jar'?)

Indeed it is. When the five students in the class realize they're all having similar, shocking experiences, they decide that they need a code word to refer to the inexplicable "place" they visit. Jam comes up with the name Belzhar (pronounced Bel-zhar, with the zh sounding like the J in Jaques), which is a riff on The Bell Jar, the book they're reading, and which sounds to her like an exotic, other world, a place where everything is set right. I read The Bell Jar for the first time when I was an adolescent, and I have never forgotten it. 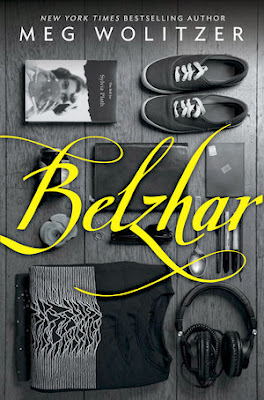