(from flavorwire.com
by Lincoln Michel) 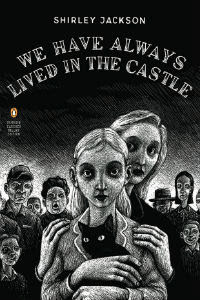 “All cat stories start with the statement: ‘My mother, who was the first cat, told me this…’ ” – Merricat Blackwood

When I first read We Have Always Lived in the Castle, I immediately gave it to my girlfriend. She read it in two nights and ran to give it to her sister, who devoured it and gave it to their mother. For all I know that copy is halfway to Tuscaloosa by now.

It’s that kind of novel.


We Have Always Lived in the Castle, Shirley Jackson’s final novel, tells the story of two sisters, Merricat and Constance Blackwood, who live with their Uncle Julian in a giant, New England house. They are surrounded by villagers who hate them and chant nasty songs when they pass (“Merricat, said Constance, would you like to go to sleep? / Down in the boneyard ten feet deep”). The three are the only survivors of an arsenic poisoning that killed everyone else in their family. The poison was sprinkled on the sugar bowl, and the sugar was sprinkled on dessert. Constance, who never took sugar, and Merricat, who was sent to her room before supper, were unharmed. Uncle Julian, who only took a little sugar, technically survived, but both his mind and body are shadows of their former selves. Despite being hated and feared by the townspeople around them, the two sisters and their uncle live a somewhat idyllic life — that is, until a cousin named Charles comes to try and steal the family fortune.

There are so many things that one could talk about in Jackson’s final masterpiece. It is part murder mystery, part haunted-house origin story, and part, as Jackson’s biographer Judy Opphenheimer said, “paean to agoraphobia.” Like Jackson’s The Sundial, We Have Always Lived in the Castle is a one of the great American Gothic novels, deftly using atmosphere and mystic — albeit mostly invented — symbolism to create tension, mystery, and unease. At the same time, it is wildly and blackly funny. The imaginative and poetically whimsical narration could lead the book to be classified as Young Adult if published today. In these ways, it strikes me as a remarkably prescient novel — a foremother to contemporary writers like Kelly Link, Neil Gaiman, and Karen Russell.

But what stands out to me the most in We Have Always Lived in the Castle is its fascinating female characters, especially the book’s narrator, Merricat, who is, for my money, one of the greatest literary creations of American fiction.

Sometimes it feels like the only adjectives critics use to discuss female characters are “strong,” if they like the character, or “unlikable,” if they don’t. Most writers I know, especially female writers, feel suffocated by these simplifications. We don’t spend time worrying if Jay Gatsby is “strong” enough or if Captain Ahab is too “unlikable.” (If you want to read further on this subject, here are Carina Chocano and Kate Beaton on “strong female characters,” and Roxane Gay on “unlikable” ones.) These terms are doubly problematic as it is unclear what they even mean. Isn’t every interesting character — and human being for that matter — simultaneously strong and weak? Aren’t “unlikable” characters often the most beloved?

What I want from characters is for them to be fascinating. I am not reading to find someone to “have a beer with.” I’m not reading to see reflections of my friends in the page. I’m reading to be surprised, gripped, and then carried off — like deer downed by a pack of wolves — into the woods of an author’s mind.

So what is Merricat Blackwood like? Merricat is feral, whimsical, poetic, confident, terrified, insightful, loving, sadistic, lonely, and agoraphobic. She is an angsty teenager, a witch practicing magic of her own invention, and a young woman who seems simultaneously 12 and 102. Here is her self-description, which opens the novel:

My name is Mary Katherine Blackwood. I am eighteen years old, and I live with my sister Constance. I have often thought that with any luck at all, I could have been born a werewolf, because the two middle fingers on both my hands are the same length, but I have had to be content with what I had. I dislike washing myself, and dogs, and noise. I like my sister Constance, and Richard Plantagenet, and Amanita phalloides, the death-cup mushroom. Everyone else in our family is dead.
To ask if Merricat is “strong” or “unlikable” is to ask nonsensical questions. Like all compelling characters, she is both strong and weak, both hero and villain. If you spook her, she might sprint off into the woods with her cat Jonas. But if you anger her, she might set your room on fire. Merricat would be impossible to live with, but on the page she is completely and utterly compelling.

Merricat’s mind is chaotic and somewhat unpredictable. Often, her naïveté is charmingly childlike. At the end of the novel, when the sisters have lost everything they have, Constance wonders aloud what they will even wear. “I shall weave a suit of leaves,” Merricat replies. “At once. With acorns for buttons.” At other times, her daydreaming is pitch black: “I could turn [Charles] into a fly and drop him into a spider’s web and watch him tangled and helpless and struggling, shut into the body of a dying buzzing fly…I could fasten him to a tree and keep him there until he grew into the trunk and bark grew over his mouth.”

The balance of spitefulness and sweetness, of morbidity and
whimsy, is a very hard to achieve. (It would be easy to imagine Tim Burton transforming Merricat into some cheesy mall goth with a pale Helena Bonham Carter and a gasping Johnny Deep watching over her as Constance and Uncle Julian.) But Shirley Jackson’s impeccable prose, and her commitment to true underlying darkness and disease, makes Merricat terrifyingly alive.

Merricat’s sister, Constance, is almost certainly “weak,” but she is fascinating as well. While Merricat hates the townspeople, Constance is so paralyzed by them that she never leaves the property. She is already halfway to becoming a ghost, yet part of her yearns for a normal life. When Charles comes to Blackwood Manor, he tempts her with the idea of the outside world. For much of the book, the tension comes from whether Constance will follow Charles out into the world or if she will be subsumed into Merricat’s feral fantasy.

A weaker author concerned with “likability” might have made Constance the hero of the story and ended with her escape into “the real world.” But — spoiler alert — We Have Always Lived in the Castle is a novel of female power, and the bond of sisterhood, no matter how twisted and gnarled the cord, is destined to win out over the dull greed of Cousin Charles or the banalities of village life.

We Have Always Lived in the Castle was the last book Jackson ever wrote. It was published as her own paranoia and agoraphobia started to take over. (At the end, she apparently wouldn’t even leave her filthy, cluttered bedroom.) It bears similarities to Jackson’s most famous work, the short story “The Lottery.” In both, townspeople in an apparently contemporary northeastern town are depicted as simple-minded cretins. Jackson and her husband, the Jewish critic Stanley Hyman, lived in North Bennington, Vermont. There, Jackson recoiled at the townspeople’s anti-intellectualism and anti-Semitism. “The Lottery” ends with the villagers stoning the “winner” of the titular lottery, clinging to the brainless tradition, “Lottery in June, corn be heavy soon.” We Have Always Lived in the Castle climaxes when the villagers arrive to see the Blackwood estate on fire and, shouting at the firemen to let it burn, begin hurling stones through the windows.

The ending — like the main female characters and indeed the novel as a whole — resists simple interpretations. On one level, it reads like a fairy-tale ending. The evil townspeople have been repelled and only return to give the sisters baskets of food as an apology. On another level, it is deeply disturbing. Constance has been dragged completely into the diseased world of Merricat. The sisters stand in their burnt house, all of their possessions and connections to the world severed. “Oh, Constance,” Merricat says with chilling cheer. “We are so happy.”

The reader is left to imagine what happens to these lost sisters. Do they live happily ever after in their ruins? Do the townspeople return to drag them to an asylum? Or do these women simply hide away until they fade, like ghosts, into the charred remains of a now-haunted house?
Posted by Mollydee55 at 2:41 AM