(from nytimes.com
by Ralph Blumenthalmarch) 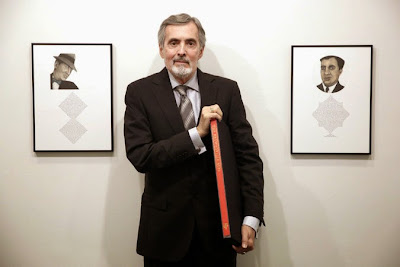 Not that anyone is out to make a killing, but a new book on the mob hit men of Murder Inc. will cost you.

Before you decide to refuse this offer, know that “The Brownsville Boys: Jewish Gangsters of Murder, Inc.,” published by Two Ponds Press in Camden, Me., is no ordinary book.

Measuring more than a foot-and-a-half by a foot, the collector’s edition, lavishly illustrated, printed and boxed, is written in noirish language by a crime scholar at the John Jay College of Criminal Justice.

And don’t forget Lena (Ma) Frosch and her Bail Bond Gang, who often bribed them out of prison.

Their baleful countenances glare from the walls of John Jay College, at 10th Avenue and 58th Street, where an exhibition on the book in the sixth-floor President’s Gallery will open to the public on April 3.

Sixty copies of "The Brownsville Boys" were printed. Credit Michael Appleton for The New York Times

“Crime in early-20th-century New York was run by old-time Sicilians called ‘Moustache Petes,’ ” writes the author, Larry E. Sullivan, associate dean and chief librarian at John Jay College. But newcomers in the tenement underworld made for friction, and in 1931, five Jewish gangsters, including Samuel (Red) Levine (“who, if possible, never killed on the Sabbath”), rubbed out the second of two fearsome Sicilian Mafia bosses, opening the way for Jews, Italians and Irish to carve up the rackets.

Public Enemy No. 1, the book says, was Lepke — devoted to his mother, wife and son — who with Albert (the Mad Hatter) Anastasia controlled the contract execution squad called Murder Inc., responsible for about 1,000 hits.

“Ratted out” by Abraham (Kid Twist) Reles, however, Lepke “went into the wind,” only to get “snookered” by Walter Winchell and J. Edgar Hoover. “But Buchalter was no cheese eater and wouldn’t squeal. On March 5, 1944, he went like a mensch to ‘Old Sparkie’ in Sing Sing.”

Lepke’s tutor was Arnold (the Brain) Rothstein, who presided out of Lindy’s restaurant on Broadway, fixed the 1919 World Series and “took hot lead” over a gambling debt in 1928. But, the book says: “Staying true to his code, he never peached out. As he lay dying and police asked who shot him, he replied, ‘Me mudder did it.’ ”

“It took me a while to write like this,” said Mr. Sullivan, who is working on a traditional biography of Lepke.

A former librarian at the Maryland State Penitentiary in Baltimore, he claims to possess the largest collection of American convict literature, about 350 first (and usually last) editions.

In an unusual 2002 art project to celebrate the Bill of Rights, the artist Richard Minsky took an earlier book by Mr. Sullivan, “Forlorn Hope: The Prison Reform Movement,” re-bound it in stripes and chained it to a miniature jail.

The portraits in “The Brownsville Boys” were executed by an English artist, Bob Wakefield, a protégé of the renowned American sculptor, book illustrator and printer Leonard Baskin, who had conceived the project with Mr. Sullivan in 1993 for his Gehenna Press.

Mr. Baskin died in 2000, but the idea was revived three years ago by his longtime representative, Kenneth Shure, and Mr. Sullivan, for publication by Two Ponds Press. The publisher was founded by Mr. Shure and his wife, Liv Rockefeller, an art collector and great-great granddaughter of John D. Rockefeller’s brother William.

A noted Manhattan typographer, Russell Maret, conceived the text design in fanciful shapes (one a coffin); the cloth chemise protective covering and the box were created by another sculptor, Claudia Cohen, in Seattle. The book is unbound, for easier display of its leaves.

Sixty copies of the book were printed. About 10 went free to its contributors. Twenty — including about half at an early discount price of $3,800 — were sold to institutions like the Library of Congress, John Jay, Yale, the University of California at Los Angeles, Stanford, the University of Delaware and Wesleyan.

He said he was hopeful that private collectors would come forward “even without a gun” to buy up the remaining 30 copies. The book’s value could then rise in the secondary market.

His $4,200-per-copy price was not set to “make a killing,” Mr. Shure said, noting that it barely covered production costs. Indeed, many art press books are far more expensive. Two Ponds Press recently issued “The Little River,” a previously unpublished story by Margaret Wise Brown, author of “Goodnight Moon” and “The Runaway Bunny,” for $4,500 a copy.

A 1998 book of poems by Anthony Hecht illustrated with Mr. Baskin’s drawings and published by Gehenna Press is now listed at $14,500, and Matisse’s “Jazz” is virtually unavailable at any price.

As for whether Mr. Sullivan’s book mythologized organized crime, Mr. Shure said no.

“I wouldn’t say he’s glamorizing these guys,” he said, “but giving a slice of life: Crime doesn’t pay. They all disappeared in the electric chair or at the hands of associates.”

Sixty copies of "The Brownsville Boys" were printed. Credit Michael Appleton for The New York Times
Posted by Mollydee55 at 12:05 PM