Paper vs Digital Reading is an Exhausted Debate 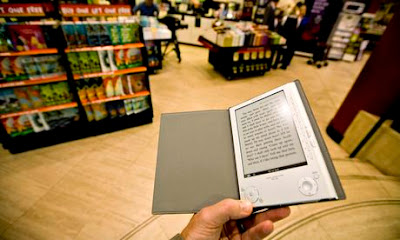 Time to turn the page … an ebook reader in Waterstones. Photograph: Martin Argles for the Guardian

The digital revolution is going into a decline, Tim Waterstone told the Oxford literary festival. Well, it's an attention-grabbing statement, ideally suited to our culture of assertive headlines, but it's probably not true. That's not to say that the rapid growth of digital will necessarily continue, either, certainly not in markets that are already saturated with handheld devices.

Why? Because the future is – as William Gibson told us quite a long time ago now – not evenly distributed. In fact, if one thing is ubiquitous these days it would seem to be liminality. Everywhere is an in-between place. For example, even in fairly remote bits of Kenya an SMS-based information service called iCow provides farmers with veterinary advice tailored to each of their animals, including reproductive calendar reminders, feeding schedules and market information. There are fewer and fewer venues where digital technology has made no impact – and where there's a digital device, there are ebooks, at least in potential. They need not be anyone's primary method of consuming literature, but in some situations they will be the best one. Rather than circling the wagons as other media industries did (to no good outcome, it has to be acknowleged) publishers need to learn the more recent lessons from music and film and consider, for example, providing digital copies as standard with hardback editions.

Digital will continue to grow for a while at least, and continue to exist, because it is becoming part of the world we inhabit at a level below our notice, no more remarkable than roads or supermarkets. Ebooks are here to stay because digital is, and quite shortly we'll stop having this debate about paper vs ebooks because it will no longer make a lot of sense.

By the same token, paper has a place in our hybrid future. Digital books are still painfully ugly and weirdly irritating to interact with. They look like copies of paper, but they can't be designed or typeset in the same way as paper, and however splendid the cover images may look on a hi-res screen, they're still images rather than physical things. To my irritation, you still can't flick through an ebook properly; you can't riffle the pages, you can't look at more than one page at once. And the advantages of having a book in digital form (easy scrolling text, proper shareability, a global text search of your library, synchronisation with audiobooks, links to television adaptations, person-to-person sales) have been ignored in favour of a weak simulacrum of paper. Better, a lot of the time, to shove a paperback in your pocket. And for when you forget, well, there's still your phone.

Until a digital book is a magical object which physically transforms from 50 Shades into the new James Smythe novel according to your whim; until you can walk through a digital library and open books at random; until the technology becomes as satisfying to the physical senses as the text is to the cognitive self, there's still a need for shiny, gorgeous, satisfying books. And when those things happen, if they do, we will have lost nothing in the transition.

A rather more important discussion than whether one half of this indivisible whole will somehow shed the other would be about this government's seeming determination to destroy our system of public libraries and dispense with Britain's access to knowledge (especially, it seems, in prisons). It strikes me that an infantilised public is far easier to control than one that reads, that prisoners are far easier to demonise when they are cut out of national cultural conversation, and that books – consistently found to increase empathy in those who read them – play against the mean-spirited assault on welfare and disability benefits presently under way. If the book trade has drawn one obvious flaw from the corporate culture that took it over in the 80s, it's that it tends to be a bit inward-looking, and to imagine that decisions made in and about the industry affect only the industry – hence the endless hue and cry for more aggressive copyright enforcement, and never mind that such enforcement would require a level of intrusion into the private spaces of our customers presently available only to GCHQ and the NSA.

It's time to look beyond our borders rather more, and see that we are part of the world. Paper vs digital will take care of itself. That being the case, we have bigger fish to fry, a sentiment with which I suspect Tim Waterstone, formerly chair of Shelter's 25th Anniversary Appeal and a Labour Party donor, would surely agree.