(from azcentral.com
by Kaila White) 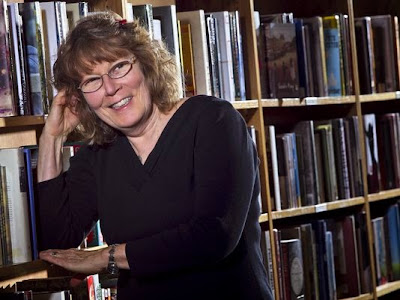 
In the 40 years since she co-founded Changing Hands Bookstore, Gayle Shanks guesses she has read about 2,000 books — roughly one a week, although she has slowed since she started opening the bookstore's second location in downtown Phoenix.

"I always joke with people that I have so much information about characters and titles and authors in my head that, if I didn't have that, I might become Einstein," Shanks said, laughing.

Changing Hands is celebrating its 40th anniversary on Saturday, April 5, with live music, readings from two young-adult authors and kid-friendly activities such as magic shows, cookie decorating and story time with the Lorax.

Shanks' encyclopedic knowledge of literature means that customers can come to her with problems or questions and "somehow this book flashes into my brain and I say, 'You might want to try this. I read this and I think it might give you a new lease on life.' "

A few weeks later, the customer returns, thanking Shanks for the life-changing book; it has happened more than a hundred times, she said.

And there are books she loved 40 years ago that she still revisits and recommends to others, such as Gabriel Garcia Marquez's "One Hundred Years of Solitude" and Ken Kesey's "Sometimes a Great Notion."

"My hopes and dreams in 1974 were that we would have a bookstore for at least a year," she said, "but from nearly the first few months we were in business it became a love affair" with the community.

To drum up business, Shanks and her two co-founders reached out to schools, community-service groups and anyone who would work with them.

"That kind of built this symbiotic relationship between us and those organizations in the community, and it always came back to us tenfold."

Kent Brockelman and his family have been Changing Hands devotees since they moved to the Phoenix area in 1984. His favorite thing about the store is the "staff picks" area, which he said is unparalleled thanks to each employee's genuine devotion to books.

"Gayle has been probably my main reading guide for almost three decades now. I will say it has vastly enriched my life," Brockelman said; he has read two of her recommendations in the past six weeks.

"There are certain people you don't want to go out and keep up with drinking; you cannot possibly keep up with Gayle and Bobby (Sommer, a co-founder) reading."

His three children have been going to Changing Hands since they were born, and the family has been known to accidentally give each other the same gift from Changing Hands at Christmas.

"Independent bookstores, I think, create and sustain community," Brockelman said. "I think all really interesting urban areas have places you can gather to do things like hear live music, have good coffee, meet for drinks and food. These public spaces make life more interesting, which is why I'm so excited they're opening a Phoenix store."

Since its founding, Changing Hands has existed in three Tempe locations, finally settling in at McClintock Drive and Guadalupe Road in 1998. Last year, it launched an Indiegogo crowd-funding campaign to help finance the second location on Camelback Road and Third Avenue in the former Beef Eaters restaurant in Phoenix, which Shanks said is set to open by May. Thanks to its First Draft Book Bar, it will be part book haven, part bar heaven.

Shanks had been considering retirement when she was approached about two years ago with the idea of opening the second store. Since then, she has worked more than full time, half buying books for the store, half working out the logistics of wine on tap and redwood bar tops.

"I have to say, I've never felt younger," Shanks said, laughing. "I really think that this new store is going to be one of the most beautiful bookstores in the country, and I'm so jazzed about that."

Changing Hands' success undoubtedly is linked to the passion of its co-founders: Shanks, Sommer and Tom Brodersen.

"I have had a mission from the time I was a really little girl that my job was to make the world a better place to live in, and the way I figured out ... was to bring books that would make people think about their world into their lives and they, in turn, enriched mine," Shanks said.