Classic Childhood Books That Grow With You

(from huffingtonpost.com
by Zola Books)


Remember the books your parents/teachers/babysitters read to you when you were a kid? When it came to my parents, they chose the books they had loved as children themselves. When my mother read these to me, she would often end up crying at the end. Just imagine my six-year-old confusion: Why were happy endings sad? I didn’t get it.

Looking back on those books now, and even on what I read in my tweens and early teens, I start to understand. Go reread the ending of The House at Pooh Corner—it’s a weepy one for sure. Reading old favorites as an adult is satisfying, heartbreaking, and often mindblowing.


Chances are you’ve read these classics, but prepare to discover the rollercoaster ride of feels when you reread them.

Kid Read: Bedtime stories like The Sneetches, Yertle the Turtle and The Lorax were all fun. Everything rhymes, half the words are gibberish, and even though you sensed the moral buried in there somewhere, it was all part of the hilarious shenanigans.

Adult Read: Get ready to have your innocence ruined. Dr. Seuss is all politics. The Sneetches is about the futility of the Cold War’s unarmed struggle between the USSR and the USA. Yertle the Turtle—come on, it’s a huge turtle sitting on top of all the little turtles, can you say “monarchy”? As an adult, sure, but you definitely couldn’t as a kid. The Lorax? You guessed it. The saddest of Dr. Seuss’ books—it’s even pretty tough for some kids to get through—is about a conversation that’s especially vital today: preserving the environment, and the cost of not doing so.

Kid Read: Louisa May Alcott’s Little Women starts on Christmas Eve, and that is exactly what reading the book feels like: comforting, like hot cocoa on a freezing winter afternoon. The novel’s four sisters, their loving mother, their doting father, and the boy next door have adventures, trials and tribulations, and (almost) all of them live happily ever after. It’s the kind of novel you read after being tucked in and kissed goodnight.

Adult Read: Though people say Alcott was forced to write this book by her publishers, she still took the opportunity to show off her belief in women, long before the word “feminism” was coined. You’ll notice that the sisters and their mother work in Mr. March’s absence during the Civil War, which presents them as equal to him and the other men in their lives.

Alcott handles religion, immigration, and death as well as grownups’ need to get over the castles in the air you built as a child. Not only is the novel rich with meaningful historical context—it will also break your heart to realize you’re old enough to read about children leaving home with a pinch in your heart, because you see yourself (and your own children) in them.

Kid Read: Despite it being written by some French guy whose name you can’t pronounce, you recognize a cool adventure story when you read one. Besides, The Little Prince proves to you that being an adult sucks, because they ask you stupid questions and never get what you’re trying to draw.

Adult Read: Antoine de Saint-Exupéry, who wrote the book, was one smart cookie. Now that you have some idea of what the world is like, you see what he’s doing here. He’s urging you to never stop asking questions the way kids do. He’s telling you that love is difficult and that hoarding money is like trying to count the stars in the sky. As a philosophical discussion for basically everything, The Little Prince will make you nostalgic for your lost innocence. 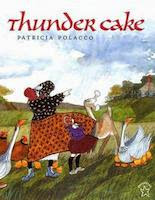 Kid Read: Were you scared of thunder? Thunder Cake made sure you thought of a delicious chocolate cake instead. The Keeping Quilt inspired you to consider the old objects in your house in a whole new way. Mrs. Katz and Tush had a cat and a sweet old lady and a shy little boy who you liked. You ran your hands all over the pictures because they looked soft.

Adult Read: Patricia Polacco’s books are all about family, cultural traditions, and the warm fuzzy kind of love all people share, no matter where they come from. She tackles big issues like race, differing cultures, and the idea of death in ways that your kids can understand. And you? You will bawl like a baby at the happiest ending now that you’re old enough to understand the painful beauty of life.

Kid Read: A girl who spies on people! She has a really pretty attic room! She writes things down in a notebook! She has a BAMF nanny! She has an imagination like Anne of Green Gables but is way cooler because she gets into trouble and toughs it out!

Adult Read: Louise Fitzhugh’s Harriet the Spy was way ahead of its time. It deals with difference in class: Harriet is upper-middle-class, whereas her best friend has an absent mother and an absent-minded father, and knows how to pay bills and balance a budget at the age of 11. Fitzhugh has Harriet go to a therapist long before this was the thing to do with “problem children.” The issue of privacy—which is on everyone’s minds recently—comes to the forefront when Harriet’s secret notebook is passed around between all the kids in her class who then stop talking to her because she wrote mean things about everyone. It’s a book to pick apart (a new way to enjoy it) now that the years of wanting-to-be-Harriet have passed.