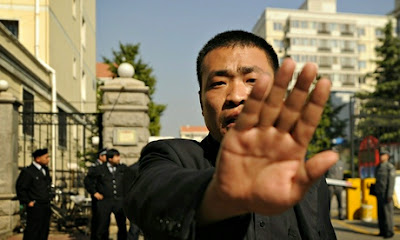 The poet, journalist and activist Aron Atabek has been in prison since 2007 and has spent much of his incarceration in solitary confinement. In December 2012, following the online publication of The Heart of Eurasia, a critique of President Nursultan Nazarbayev's regime (written in prison by Atabek and smuggled out for publication), the poet was sentenced to spend two years in solitary confinement. He was denied access to natural light, communication with other prisoners, writing materials and telephone calls; family visits were severely restricted, resulting in only one successful visit between 2010 and the current date; he was kept under constant video surveillance.

My Throat Will Die by Aron Atabek

My throat, unable to speak, will die
For the sounds of my homeland.
My ancestors' patter will vanish
Like water into sand.
I am a storyteller of immortality
In Semitic and Etruscan tongues;
I am the dust of Turkic dialects
Writing in Russian.
Many lives' twisted fates
Are lost inside me, mourning,
And I myself am a naked tangle of nerves
Pulsating with verses

Liu Xia is a poet, artist, and founding member of the Independent Chinese PEN Centre. She has been held in her Beijing apartment without access to phones, internet, doctors of her choice, or visitors since her husband, Liu Xiaobo, was named the winner of the Nobel peace prize in October 2010. In recent months, there has been increased concern regarding the mental health of Liu Xia, who is reportedly suffering from depression.

One Bird After Another by Liu Xia

Poet, author and founding member of the Cameroon Writers' Association, Meyomesse was arrested on 22 November 2011 and initially charged with attempting to organise a coup, possessing a firearm and aggravated theft – charges denied by the author, who maintains he was arrested because of his political views. After concerns over his treatment in prison and fabricated evidence, all of the charges were dropped in June 2012. A judge ordered his detention should be extended and he was charged and found guilty of being an accomplice to theft and illegal traffic of gold.

you visited me that day
and the black night, without stars
without moonbeams
without fireflies without future
without anything
you could cut it with a machete
like the night when my feet
lost their way behind
the village hut
oh God in heaven
inky
darkness
beat down on me
and you oh earth
yes you oh earth
you had stopped
turning

Chávez, a prominent poet and women's rights advocate, was found murdered in the border town of Ciudad Juárez on 6 January 2011. Her body found strangled, with one of her hands cut off, was only identified five days later. Chávez (born 5 November 1974) had been highly vocal in calling for justice for the hundreds of women killed in the Juárez area since the early 1990s, both as an activist and through her writings; in particular taking part in numerous poetry readings which she dedicated to the murdered women.

This poem, by Claribel Alegría, was one of a number of poems in the Pen International anthology Write Against Impunity which was dedicataed to Chávez's memory.

Impunity extends
over our America
multiplies
demands
turns us indifferent.
They fall in cascade
journalists
poets
writers
they committed the crime
of denouncing crime
and not closing their mouths
and flushing out
assassinations
crimes
rapes
and may the children know
and may the students read it
and the old.
Let's unite, brothers
let's unite
we denounce crime
and all those
that want to silence us.
Let's unite, let's unite
Impunity advances
and turns us into cowards.
Let's wake up
brothers
and between us all
gash the neck
of the medusa
to that impunity
its multiple heads
that threaten to swallow us.