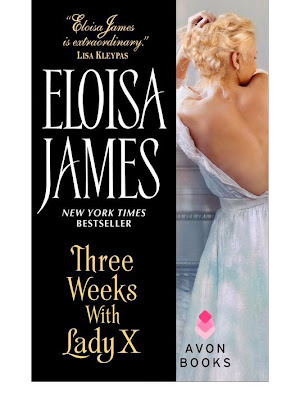 Eloisa James, whose Three Weeks With Lady X came out this week, likes to sprinkle literary shortcuts into her historical romances …

Eloisa: A reader wrote this week to demand why I parodied Jane Austen on the first page of Three Weeks With Lady X. She had an interesting point.

You'll remember that Mr. Darcy begins his first proposal to Elizabeth, in Pride and Prejudice, in the worst possible fashion: "In vain have I struggled. It will not do. My feelings will not be repressed. You must allow me to tell you how ardently I admire and love you."

Lady X opens with Lady Xenobia India receiving a proposal from Lord Dibbleshire, a stout, perspiring, and foolish man, who considers her beneath him: "In vain have I struggled, but I can no longer contain my ardent feelings; I must reveal to you, no, enlighten you about the depths of my emotion!"

I consider the echo more an homage than a parody (which is defined as exaggeration for comic effect). As an English professor, weaving literary references into my books is a fairly private delight, like constructing a puzzle. But the references do also work as shortcuts for readers who catch them: In this case, Lord Dibbleshire's arrogance is established, and my heroine India's resemblance to Elizabeth is foreshadowed.

Here's another example. The hero of Three Weeks is the son of Duke of Villiers, who appeared in my Georgian-set series of books, the Desperate Duchesses series. I enjoyed portraying one of my favorite characters now happily married and a decade past his own book. In Three Weeks, the duchess teases him for his notorious style of dress. "I grow old, I grow old," the duke said, not mournfully. "Soon I shall wear flannel waistcoats and my trousers rolled, and all this elegance will be naught more than a distant memory."

Not a parody … not precisely an homage … more a shortcut to emotion expressed with exquisite precision by T.S. Eliot.

Here's the blurb about Three Weeks With Lady X (courtesy of Avon Books):

Having made a fortune, Thorn Dautry, the powerful bastard son of a duke, decides that he needs a wife. But to marry a lady, Thorn must acquire a gleaming, civilized façade, the specialty of Lady Xenobia India.

But neither Thorn nor India anticipate the forbidden passion that explodes between them.

Thorn will stop at nothing to make India his. Failure is not an option.

But there is only one thing that will make India his . . . the one thing Thorn can't afford to lose . . . his fierce and lawless heart.

Find out more at eloisajames.com.