Really? You’re Not in a Book Club?

(from nytimes.com
by James Atlas) 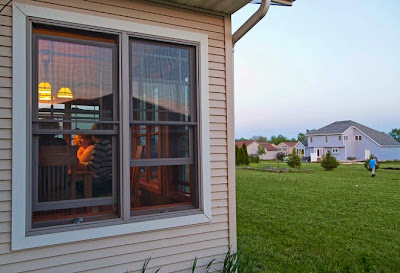 A book club meets in Fall River, Wis., at the home of Sara Uttech. Credit Darren Hauck for The New York Times

“WHAT’S your book group reading?” I say to a friend encountered on the street. Not: “Are you in a book group?” I have no idea whether Clara is in a book group. We’ve never talked about it. All the same, I just know. Why? Because it’s a safe assumption to make these days.

By some estimates, five million Americans gather every few weeks in someone’s living room or in a bar or bookstore or local library to discuss the finer points of “Middlemarch” or “The Brothers Karamazov.” (A perfect number is hard to pin down because some people belong to two or three clubs, and of course, there’s no central registry of members.) Among them is Clara, whose book group even has a name: the Oracles. They’re reading “The Flamethrowers,” by Rachel Kushner.

I used to think that the popularity of this institution was a quirk of life in New York, like restaurants where you can get a reservation only by calling a month in advance or parties where every single person you meet is smarter than you are. But the book-club boom is nationwide. Should you live in the Miami area, you can hang with “Book Babes”; in San Francisco, drop in at “The Mind-Benders Book Club.”

And it’s not just a big-city thing: In the event that you find yourself in Waco, Tex., check out “A Good Book and a Glass of Wine,” which has 21 members (women only) and is always looking for new ones. All you have to do is go online.

Since we live in a world where you don’t have to actually “be” anywhere, it’s not surprising that virtual clubs have lately appeared on the Internet. ZolaBooks bills itself as a “social eBook retailer” that connects readers; Goodreads gives members the opportunity to read a book together, install books they’ve read on their “shelves” or find “friends” with whom to share discoveries. (I just joined and have “no friends,” according to the site.)

Or you can navigate to lists like — useful this winter — “Best Books to Read When the Snow Is Falling.” These sites aren’t just for oddball bibliophiles: Goodreads claims to have 25 million members and was sold to Amazon last year for a number rumored at $150 million or above.

Some book groups merge the virtual and the “offline community,” as Nora Grenfell, the social marketing manager at the digital media news site Mashable, calls its estimated 34 million monthly unique visitors. The site’s Mashable book club started out as an informal, internal group that met at its offices in the Flatiron district, but after members began to write about it online, followers asked if they could participate. Thus was born MashableReads, a monthly gathering for a small number of invited members joined by a guest writer. So far writers like Ishmael Beah, Malcolm Gladwell and Chang-rae Lee have appeared. Mashable followers can participate in the discussion on Twitter.

But the most prevalent way of conducting a book club is still in someone’s living room. The basic ritual is the same all over: A small group gets together every few weeks to discuss a pre-assigned title; to eat, whether that means noshing on cheese and crackers accompanied by a glass of wine or a four-course dinner; and to gossip in a dedicated way. It may be social, but it’s also serious; members devote long hours over many weeks to getting to the last page. For most of them, it’s all about the book.

Reading is a solitary act, an experience of interiority. To read a book is to burst the confines of one’s consciousness and enter another world. What happens when you read a book in the company of others? You enter its world together but see it in your own way; and it’s through sharing those differences of perception that the book group acquires its emotional power.

“There’s a way of interacting through books that you don’t get through any ordinary transaction in life,” suggests Robin Marantz Henig, a journalist who is in three book groups: a women’s group, a couples’ group and a coed and intergenerational group with her daughter, an editor at The New York Times. “It’s like sitting around gossiping about people, only you’re gossiping about characters in fiction, which is more meaningful.”

In book clubs, things can get intense. “We had the most incredible discussion of art, and beauty, and loving something bigger than ourselves,” says Tracy Trivas, whose Los Angeles group often finds itself grappling with “giant issues about the inner life.” When they read aloud a passage from Colum McCann’s novel “Transatlantic” — the scene where Lily, an Irish immigrant, reflects on a painting she’s received from her husband — “half the women had tears in their eyes.”

Ms. Trivas represents a new phenomenon: the professional book group facilitator. A writer with a master’s degree in English literature from Middlebury, she presides over three adult groups, for which she charges up to $300 per session. She also runs a group for children, who nestle under a tree with their parents and read books like “Charlie and the Chocolate Factory.”

“They felt empowered sharing their opinion of the book,” she told me. “I asked them who they would rather have a play date with: Veruca Salt or Augustus Gloop. And if they could make up a different ending.”

We’re also beginning to see authors themselves taking on the role of facilitator. Established writers like Alexandra Styron command $400 to show up and talk about their own books — and that’s after the commission given to Book the Writer, an agency founded recently by the novelist Jean Hanff Korelitz. Authorial proximity has its drawbacks. “No one tells the truth when the author is present,” says a book grouper who has witnessed this phenomenon. “No one is going to insult the author when he’s two feet away from them.”

But there are good things about these home visits, too: They’re a new source of income for writers, and they offer insights into the book that come straight from the source. Book groups are like friendships: Some coalesce and die out in a few years, others last a lifetime. Susan Shapiro, an artist whose group has just celebrated its 40th anniversary, recalls that it started with “young moms in the park who wanted to have more to talk about than kids in the sandbox.”

Members have come and gone — “no one has died” — but the format remains the same: “We take turns leading the discussion, and two members have to read a book before it can be adopted. Some do scholarly research, others are more informal. We have an easy flow of ideas.”

I heard about a group that had been around even longer. Founded in 1971 by a group of Ivy League graduates, it has been meeting once a month ever since. The passage of 43 years has had inevitable consequences. On the positive side, members of the group can claim to have read all the books and not be exaggerating; on the negative, encroaching senility; a death or two; an acrimonious divorce that had the couple fighting over who would get to stay in the group. One experiment that failed was calling in “professional help,” a group leader to set the course. “That didn’t work out at all,” said one male member. “The men didn’t like being told what to think.”

The reading experience — let’s admit it — is less pure in the mature atmosphere of Book Club World than it was in the intellectually heady days of college. Diversions from the matter at hand are inevitable. When you have 10 lively people in a room and a good meal on the table, it’s sometimes hard to remember why you’re there. “It’s all about the dinner,” says the novelist Sally Koslow, a member of a Manhattan group.

My own group is highly disciplined, and we talk about the work under discussion with admirable fervor, but we do like to eat. Our meetings remind me of a restaurant I pass on the Connecticut Turnpike that has a sign out front saying FOOD and BOOKS. The gossip-prone among us are kept in line by the presence of our kindly but firm moderator, Ilja Wachs, a professor of comparative literature at Sarah Lawrence whose enthusiasm for the classics is infectious. By the end of one meeting, I had gone from resisting “The Mill on the Floss,” which I associated with seventh grade, to admiring it as a grim study in thwarted passion. (Maybe if I hadn’t skimmed the last chapter on my iPhone while riding the crosstown bus to the meeting I would have figured this out for myself.)

Surely I’m not alone in my dereliction. I was chastened by a stern directive I came across from the head of “The Sweetness: Astoria Book Club”: “Please make sure to read the book! Even if you hate it and have to choke it down, we’d love to hear about why you hated it.”

This is a perfectly reasonable request, but not always easy to fulfill. One thing that’s rarely talked about is how time-consuming book groups are. (One group I heard about, discouraged by the time commitment of big novels, has taken to reading poetry.) Mine has a penchant for plump Victorian novels like “Nicholas Nickleby” that were serialized. Everyone in 19th-century London read these novels. “Great Expectations” was their “House of Cards.”

It’s harder now, given the pace of modern life, but we hunger for it more. In the end, book groups are about community. The success of the One City, One Book initiatives in Chicago, Seattle and smaller towns across the country, where everyone is encouraged to read the same book, reflects the longing to share. So does Oprah; her book club binds together a nation disparate in its customs, classes, religions and ethnicities by putting it in front of the TV and telling it what to read.

We spend our days at airports or commuting to work; our children come and go; our friends climb up and down the social ladder; we change jobs and move house. No one knows their neighbor.

But a lot of us are reading “The Goldfinch.”


James Atlas is a contributing opinion writer and author of “Bellow: A Biography.”