Children's Books for Children: The History of Little Golden Books

(from mentalfloss.com
by Rob Lammle) 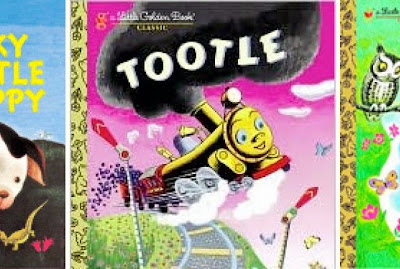 There's a good chance you grew up reading the adventures of The Poky Little Puppy, Tootle, or Scuffy the Tugboat in the pages of Little Golden Books. Come along as we look at the history of these tiny tomes with the gold foil spine that have helped generations of kids learn to appreciate the printed word.

Before the introduction of Little Golden Books in 1942, children's books were not really made for children. They were usually large volumes that were too difficult for young readers to handle or comprehend, and were awfully expensive at $2 to $3 each (about $28 - $42 today). But George Duplaix of the Artist's and Writer's Guild, in partnership with Simon & Schuster Publications and Western Printing, wanted to change all that.

Duplaix had the idea of creating small, sturdy, inexpensive books with fewer pages, simpler stories, and more illustrations so little kids could actually enjoy them. Western was already publishing a line for kids called Golden Books, so they piggy-backed on the marketing and called this new line Little Golden Books.

The first 12 titles were released on October 1, 1942, at a price of only a quarter a piece—and they were an instant success. After only five months on the market, 1.5 million copies had been sold and many titles were already in their third printing; by 1945, most were in their seventh printing. One of the keys to sales was the fact they were sold in unusual places like department stores, drug stores and supermarkets. This gave busy moms a great way to keep rambunctious kids occupied while shopping, and it was cheap enough to be tacked onto the final bill without much concern.

The Poky Little Puppy was and still is the most popular of these original titles, helping it become the best-selling children's book of the 20th century (14,898,341 copies sold). But Poky isn’t the only Little Golden Book with impressive sales. Many of the original 12 rounded out the Top 10 of the century, too. Tootle (1945), about a locomotive-in-training, was third with over 8.5 million copies sold. Saggy Baggy Elephant (1947) was #7 with just under 7.5 million, and Scuffy the Tugboat (1955) came in at #8 with 7.3 million.

Overall, well over two billion Little Golden Books have been sold since 1942 in nearly every country across the globe. (Though they were banned for many years in the Soviet Union for being “too capitalist.”)

Of course, the books couldn't stay $0.25 forever, although it did take 20 years before the price jumped to $0.29. The price continued to rise over the years, but stayed under a dollar for decades, threatening that threshold in 1986 when the price reached $0.99. Currently, Little Golden Books retail for $3.99. When you consider the buying power of a quarter back in 1942 was about $3.47 in today's money, they’re still pretty easy on the pocketbook.

ONCE UPON A TIME

In the beginning, Little Golden Books were either based on classic fairy tales or wholly original stories and characters. But all that changed in 1944, when a licensing agreement was signed with Disney, which has been in place ever since.

Along with Mickey, Pluto and the gang, there have been tie-ins with just about every kid-friendly property you can imagine, creating an interesting timeline of children's interests. The 1940s and '50s featured cowboy legends like Hopalong Cassidy, Annie Oakley, and Roy Rogers. The Flintstones, Lassie, and Bugs Bunny and friends were widely read throughout the 1960s. The 1970s saw the beginning of another long-standing licensing agreement—Sesame Street—and even a Donny and Marie Osmond book.

Kids of the 1980s will remember reading Rainbow Brite, Inspector Gadget, and Pound Puppies. The '90s saw Barney, Pokemon, and Thomas the Tank Engine books, while today, kids can read everything from Dora the Explorer to Dinosaur Train to SpongeBob SquarePants. 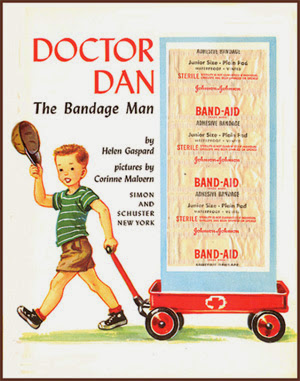 Aside from popular kids’ shows and movies, there have been a handful of corporate tie-ins with Little Golden Books. In 1951, Doctor Dan the Bandage Man included six Johnson & Johnson Band-Aids glued to the title page—1.75 million books were printed, making it the largest first run of any Little Golden Book at the time. Shortly after, a Nurse Nancy edition also sold with Band-Aids.

In 1952, Texcel Cellophane Tape sponsored Tex and his Toys, which featured a roll of tape on the cover so kids could put together paper cut-out toys. Not to be outdone, Kleenex issued 2.25 million first editions of Little Lulu and Her Magic Tricks in 1954, with a small package of tissues on the front.

Little Golden Books have also been given away with Happy Meals, Hardee’s Kid’s Meals, Kimbies Diapers, sold with Fisher-Price pull toys, and special edition books were once sold at The Ice Capades.

One of the most recognizable aspects of Little Golden Books is that famous gold foil spine. Most people don’t notice, but the spine designs have changed quite a bit over the years. The first 35 titles had a blue spine on the book, though the included dust jacket carried a gold spine with a laurel pattern, to give it a more distinguished look.

From 1947 until 1949, the dust jacket was removed and the gold spine was simply applied to the book itself with the addition of a few animals in the pattern. Between 1949 and 1969, the laurels remained, but then the animals disappeared.

Since 1969, the spine has remained essentially the same with some minor changes. They always have flowers, but different animals, like chickens, rabbits, bees, crickets, and elephants, have been swapped out over the years. However, for some special editions, different spine designs have been used. For example, from 1955 to 1959, all Christmas-themed Little Golden Books' spines had an appropriately festive motif. In addition, Disney books from 1954 to 1956 had a red Mickey Mouse Club spine, with pictures of Mickey. And to make things even more confusing, sometimes the spines have been silver. 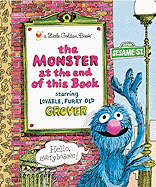 As with any beloved childhood property, there are many people who collect Little Golden Books. Of course first editions are the most sought-after, but it’s very difficult to properly identify the age of a Little Golden Book, because the copyright date rarely changes from the original printing. So even though your copy of The Monster at the End of this Book (one of the best-selling Sesame Street Little Golden Books) has a copyright date of 1971, it may in fact have been printed in 1990.

But there are ways to know if you have a first edition:

If your book has a blue spine, it was published between 1942 and 1947, and the edition number will be on the first or second page.

If there is a series of letters on the first few pages of the book, it was published between 1971 and 1991. Using the same letter to edition connection (A=first edition, B=second edition), the letter farthest to the left indicates the edition number.

Between 1991 and 2001, Roman numerals appeared on the title page to indicate the year the book was printed. If the number is preceded by an A, it’s a first edition; by an R, it’s a revised edition. If there is no letter, there’s no definitive way to know what edition it is.

Finally, since 2001, the now-standard print edition method has been adopted. On the copyright page you’ll see a list of numbers. The last number on the right is the edition of your book. For example, “10 9 8 7 6 5” would be a fifth edition.

If you ever come across a copy of Little Black Sambo in a stack of Little Golden Books, consider yourself lucky. The book, which retells the 1899 children’s story of a South Indian boy who outsmarts some tigers, has since become controversial due to the use of “sambo” as a racial slur. The Little Golden Book was first published in 1948 and continued to see publication into the 1960s, but has been out of print ever since. The controversy, of course, means the book is highly sought-after by collectors. While a first edition will always fetch the best price—often around $100—even later editions can be found on eBay for $50 and up.

You should also be on the lookout for first editions of the original 12 titles. They can be sold for $100 or more if the book is in exceptional condition and includes the dust jacket. Some special edition books, like the Band-Aid books, or titles that included cut-out toys, paper dolls, or a cardboard puzzle, can sell for about $75 if everything is intact.

While these rarities are high-priced, collecting Little Golden Books is a fairly affordable hobby. Most vintage first editions available for around $15. More modern books and later vintage editions in mint condition can be had for as little as $2 to $3. But if you just want to enjoy the stories, Little Golden Books are a staple at thrift stores and flea markets, where they can often be purchased for, interestingly enough, as low as $0.25.


*Blogger's note: I remember these fondly. I also remember reading now about how collectible they are that my mother made me give them away sometime in my teens. Ah well, the memories are better. I had so many of these books. Any one else remember these books?