ANOTHER FEMALE AUTHOR WITH CURRENCY

(from bookpage.com
by Trisha)


Nobel Prize-winning author Alice Munro will appear on a Canadian $5 coin. She joins Jane Austen in the UK and Astrid Lindgren in Sweden* as one of the only female writers to be featured on official currency—although in Munro's case, the coin is a collector's edition that costs $69.95 (CAN) and is therefore unlikely to be redeemed for its face value. 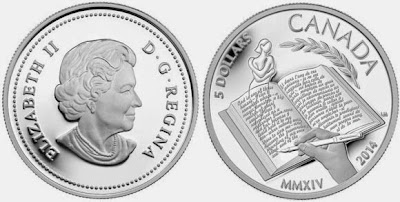 Designed by Laurie McGaw, the coin does not feature a portrait of Munro, but rather an "ethereal female figure" meant to symbolize the characters she has created. Munro's hand DOES make an appearance, holding a pen over a book that displays an excerpt from "The View from Castle Rock."

Memo to the US Mint: It's about time we had another woman join Susan B. Anthony and Pocahontas on our currency. What about our own female Nobel Prize for Literature winners, Toni Morrison and Pearl S. Buck? Or, off the top of my head, how about Emily Dickinson, Flannery O'Connor, Harriet Beecher Stowe, Zora Neal Huston, Willa Cather, Louisa May Alcott, Kate Chopin, Edith Wharton .

Do you have a female author you'd like to see on American currency?

*The Lindgren 20 SEK note is expected to enter circulation in 2015.