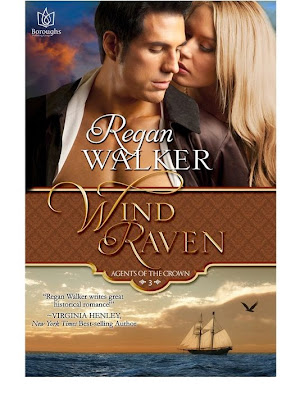 Regan: Who doesn't love a good pirate or privateer saga? All that capturing, swashbuckling and romancing on the high seas — oh, yes! My blood is boiling just thinking about it. Each February I devote my blog to historical romances with pirates, privateers and handsome sea captains. But for the HEA blog, I've done a "short list" — some of the very best of those to which I have given five stars — the ones I consider "keepers."

All are on my Best Pirate, Privateer and High Seas Romances list. You can see the full list on my Regan's Romance Reviews blog.

In each case, I've included a short description as to why I loved the story, but one thing they all have in common is that there is real history in these historical romances. 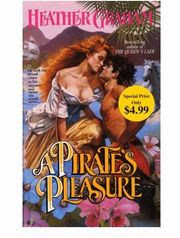 • A Pirate's Pleasure by Heather Graham. This one captivated me from the beginning … a wellborn English lass traveling to the Colonies to meet her betrothed. Unbeknownst to her, she's been married by proxy and on the way, she is captured by a pirate and falls in love with the rogue. When her husband comes to claim her, she wants the pirate instead. There's a real twist of an ending, which I confess, I did not see coming! You will love it!

• Across a Moonlit Sea by Marsha Canham. The hero in this story is one of Queen Elizabeth's famous Sea Hawks who encounters a woman with a spirit to match his own. The fireworks begin when she aims her dagger at his private parts. I loved this story: the high seas, the battles at sea. Why, I could almost hear the seagulls and smell the ocean.

• Chance the Winds of Fortune by Laurie McBain. Abducted and sent aboard a ship to the Colonies, the heroine escapes one man's evil plans for another's. Many threads are woven into the story for an exciting tale of betrayal, revenge and love wrapped around the hunt for a sunken treasure ship led by the hero, a self-absorbed aristocrat turned hardened American privateer and smuggler. Ah, yes!

• Crimson Rapture by Jennifer Horsman. The story features a brilliantly crafted heroine who will win your heart from the first page. As the daughter of a vicar, she has led a sheltered life and is totally unprepared for a hardened man like the hero, an American privateer being transported to Australia as a prisoner. A love story on the high seas that includes a monsoon, a shipwreck and a tropical isle. It's a grand tale that I could not put down! 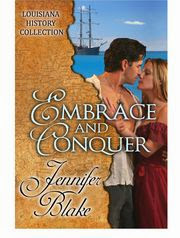 • Embrace and Conquer by Jennifer Blake. This is an absorbing bodice ripper that begins in 1769 in the former French colony of New Orleans, which is seething with unrest and violence after the Spanish takeover. The heroine thinks to escape to her homeland in France but ends up on a pirate ship bound for Las Tortugas Island. There's intrigue, action and history featuring the Spanish rule in New Orleans and the pirates in the Caribbean.

• Silver Storm by Cynthia Wright. A wonderful tale of a young innocent taken by a jaded sea captain, famous for his exploits — all set against the time of the Revolutionary War when the French were allied with America in fighting off the British and the privateers were an important part of the young country's defenses.

• The Captain of All Pleasures by Kresley Cole. This is one of my all-time favorites. It features Queen Victoria's Great Race from London to Sydney, and two competing ship captains each of whom is determined to win. Of course, one is the hero and one is the father of the heroine, who takes over her father's ship when he is imprisoned. There's a twist to this story I did not see coming, and I loved it!

• The Pirate and the Pagan by Virginia Henley. A wonderfully complex tale of deception and love from a master of historical romance set in the 17th century during the Restoration when Charles II ruled England. The hero is more than he seems and the heroine is a compelling young woman. It's a well-told pirate tale! 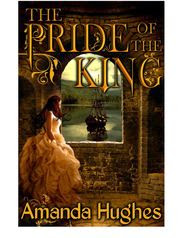 • The Pride of the King by Amanda Hughes. This saga begins in New Orleans in 1748 and has many twists and turns that finally see the courageous heroine aboard a ship of pirates and misfits who serve a master criminal — an enigmatic captain who smuggles guns, selling them to both the French and the English. It's a fascinating and well-written tale not to be missed.

• The Windflower by Laura London. This was the product of the husband-wife writing team of Sharon and Tom Curtis and some believe it was their best. I can tell you that this pirate romance set in 1813 (during the War of 1812) is one of the finest historical romances I have read. The heroine has a talent for drawing faces from memory, a talent her brother, an American spy, will use to his benefit, exposing her to pirates, such as the hero who decides to hold her captive. You'll have to find a used copy, but do find it!

• Till Dawn Tames the Night by Megan McKinney. This one has it all: superb writing, an intriguing plot, a tortured but strong hero and a heroine who won't give up. Oh, yes, and did I mention pirates?

And lest I forget, should you be interested in a dashing English sea captain who fights a real pirate to win the love of an American hoyden who defies him at every turn, check out my own, newest release, Wind Raven, set on the high seas and in the Caribbean. You can see the trailer on my website, and of course, it's available at all those online bookstores!