Flowers in the Attic

So being the age that I am (you can take a guess hehe) I am a huge V.C. Andrews fan and happy to find out what I posted about a month ago that they are going to be making more books along those lines. But what I was really interested in was the television movie remake of this book. I loved the original movie I think it kept to the book well and I loved the casting.

I probably, to do this post, should read the book again and watch the old movie but I have done that so many times in my youth I think I can speak. I loved Heather Graham as the mother. This was a good role for her. I am a fan of hers to begin with and I know she gets a lot of crap for movies she has been in that I liked. But we are talking about Flowers so let's stay on that. Ellen Burstyn was great as the grandmother. I just do not remember the little kindnesses extended for example her bringing real flowers up to the children. And if there were, the actress that played the mother before showed no mercy in her face like Ellen did. You almost thought she cared a bit and that is not the case in the book or the first movie. But I still liked her. When she was mad, I shivered.

Now the children. Cathy was a total miscast as well as the two young children. I thought only Christopher (the actor who played him) was the truest to the original. I also, if memory serves me correctly, thought you saw more of the children throughout the entire movie.

Now the party. The big fancy party. I remember in the book the children snuck out and found their way to hide in a vent. Their mother did not agree to let them hide in the liquor cabinet. I had major issues with this. How silly.

I also do not remember the mother loosing her temper and hitting Christopher but it may have happened. I wish they would have shown both movies back to back or in the same weekend.

And where are the sugar cookies that were poisoned? I remember those being on the food tray early in the movie. Instead later on in the movie they got powdered donuts the grandmother said they were from their mother and had that look of remorse and said that she would not eat them they are not good for the children's health. So that makes you wonder what the mother was up to all along. Or was it the grandmother? Was she lying. At least you knew in the first one who was bringing and powdering the sugar cookies.

Let's see what else. The kids did not discover that window right away and were pale and sickly looking. They had no television. There was no tar in Cathy's hair it was cut the first time she was disrepectful.

And the rope and the swim? Come on. From what I remember when they left they all left together. there was no rope to let them down and up again.

I can go on about a few more things I do not remember but, and correct me if any of this is wrong, I will take the first movie.

I did like the ending. It was plausible and different. But all and all, like I said, I will take the first movie. There were too many inconsistancies in the second movie.

Now this was a two hour tv movie which means it was really maybe an hour and a half or an hour and 40 minutes. I am not sure how long the original Flowers in the Attic movie was but I believe it was longer.

And any day of the week I will take my book over a movie. 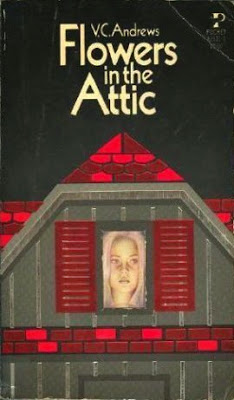