(from theguardian.com
by Lyn Inns) 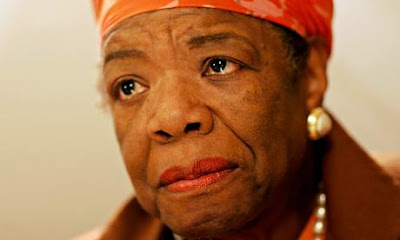 
The writer Maya Angelou, who has died aged 86, won acclaim for her first autobiographical memoir, I Know Why the Caged Bird Sings (1969), a scathing and sardonic indictment of the racial discrimination she experienced as a child in Arkansas and California. "If growing up is painful for the southern black girl," she wrote, "being aware of her displacement is the rust on the razor that threatens the throat. It is an unnecessary insult."

The book is also a celebration of the strength and integrity of black women such as Angelou's grandmother, who enforced the respect of white adults and endured the impudence of white children. Unlike Richard Wright's autobiographical Black Boy (1945), which has a similar setting and theme, it gives a sympathetic and compassionate account of a beleaguered black community while also humorously dramatising Angelou's need to find self-fulfilment outside it.

I Know Why the Caged Bird Sings has had a wide appeal, particularly to younger female readers and continues to appear on school and university reading lists in the US and the UK. The critic Harold Bloom noted that Angelou achieved with the book "an almost unique tone that blends intimacy and detachment, a tone indeed of assured serenity that transcends the fearful humiliations and outrages that she suffered as a girl".

She was born Marguerite Annie Johnson in St Louis, Missouri, the daughter of Bailey Johnson, a doorman and naval dietician, and Vivian (nee Baxter), a nurse, professional gambler, bar owner and entertainer. Maya was the name given to her by her brother, also Bailey. When her parents separated, her father sent three-year-old Maya and her four-year-old brother alone by train to live with his strong-willed and deeply religious mother, Annie Henderson, in the small, segregated town of Stamps, Arkansas.

When she was seven, Maya was raped by her mother's boyfriend. This traumatic incident, recorded in her autobiography, and the man's subsequent murder, for which she felt responsible, led her to become mute for five years. She was encouraged to read works by black authors such as Langston Hughes and Paul Laurence Dunbar, and was later persuaded by Bertha Flowers, an educated black citizen of Stamps, to read aloud from the works of Austen, Dickens, Shakespeare and various poets. She acquired a love and appreciation of the spoken word which informed her writing and her performances of her own and other people's works.

As a teenager, her brother became increasingly restless under the restrictions, discriminations and dangers experienced by black men in the south, and so their grandmother took the children to stay with their mother in San Francisco, where Maya attended Mission high school. At the age of 14 she ran away in search of her father, and lived rough in Los Angeles and Mexico for a time.

She then returned to San Francisco, completed her high school education, took lessons in dance and drama and, at the age of 17, gave birth to a son. She had no desire to marry the father, who is not named in her autobiography. She also became possibly the first African-American female streetcar conductor in San Francisco. As she recounts in Gather Together in My Name (1974), the second volume in her autobiographical sequence, she found work as "a shake dancer in night clubs, fry cook in hamburger joints, dinner cook in a Creole restaurant".

In her early 20s, she was married briefly to an aspiring musician, Anastasios (Tosh) Angelopulos, a former sailor, of Greek descent. She trained as a dancer with Martha Graham and worked as a nightclub singer, taking at that time the professional name Maya Angelou, borrowing a form of her husband's surname. In the mid-1950s she toured Europe with a production of Porgy and Bess. She recorded a calypso album and appeared in the off-Broadway show Calypso Heat Wave, also taking a part in the 1957 film version. Angelou played the part of the Queen in the 1961 off-Broadway production of Jean Genet's The Blacks, which starred Roscoe Lee Browne, Cicely Tyson and James Earl Jones. In New York, she was encouraged by John Oliver Killens and James Baldwin to join the Harlem Writers Guild and to take her creative work seriously, and she also became involved in the civil rights movement.

In New York in 1961, Angelou fell in love with the South African civil rights activist Vusumzi Make. She moved with him and her son, Guy, to Cairo, where she worked as an editor for the Arab Observer, an English-language weekly. Later she moved with Guy to Ghana, taught at the University of Ghana and worked as a features editor for the African Review. While in Ghana, she met Malcolm X.

Angelou returned to the US in 1965 intending to help Malcolm X build his new Organisation of African-American Unity. That organisation collapsed with the assassination of Malcolm X that year, and Angelou then began to work more closely with Martin Luther King. When King was assassinated on 4 April 1968 (her 40th birthday) she was devastated. Friends such as Baldwin encouraged her to begin writing, and in 1969 she completed I Know Why the Caged Bird Sings. Narrating her changing awareness and struggle for self-fulfilment between the ages of three and 17, it portrayed vividly the characters of her glamorous mother, her proud and dignified grandmother, her beloved brother and her disabled Uncle Willie, as well as the troubled relationships between the races in the south during the depression.

While this first volume of her memoirs is generally considered to be the best, the subsequent instalments – Gather Together in My Name (1974), Singin' and Swingin' and Gettin' Merry Like Christmas (1976), The Heart of a Woman (1981), All God's Children Need Travelling Shoes (1986), A Song Flung Up to Heaven (2002) and Mom & Me & Mom (2013) – have also achieved a large and appreciative audience. Collectively, they portray Angelou's experience as a young single mother; her travels in Europe and Africa with the cast of Porgy and Bess; her involvement with the civil rights movement and meetings with iconic figures such as King, Malcolm X and Billie Holiday; her life in Ghana, her son's car accident and her decision to leave him in Ghana to recover; and finally the years after her return to the US in 1965 and her decision to begin writing her first book.

She once described her writing regime thus: "I keep a hotel room in which I do my work – a tiny, mean room with just a bed, and sometimes, if I can find it, a face basin. I keep a dictionary, a bible, a deck of cards and a bottle of sherry in the room. I try to get there around seven, and work until around two in the afternoon … Maybe after dinner I'll read to [my husband, Paul du Feu] what I have written that day. He doesn't comment. I don't invite comments from anybody but my editor."

Angelou had married Du Feu (who had previously been married to Germaine Greer) in 1973. They lived in California until they divorced in 1981, when Angelou took up a position as Reynolds professor of American studies at Wake Forest University in North Carolina. Angelou vigorously disassociated herself from Anglo-American feminism, which in her view lacked an appreciation of the need for love and humour. She was nevertheless an outspoken advocate of "womanism", a quality which she ascribed to black women, and included their strength, commitment, sexual fulfilment and understanding of their complete equality with men.

Angelou gained greater international prominence when she was invited to write and deliver a poem for Bill Clinton's presidential inauguration in Washington in January 1993. This poem, On the Pulse of Morning, celebrates the diversity of ethnic groups in the US, and calls on the nation to leave behind cynicism and look forward to a new pride in self and a new dawning, as captured in these lines:

Do not be wedded forever
To fear, yoked eternally
To brutishness.

From 1998, she became a member of the board of governors for the Maya Angelou Institute for the Improvement of Child and Family Education at Winston-Salem State University. Angelou campaigned for Hillary Clinton in the 2008 Democratic party presidential primaries, but supported Barack Obama after Clinton's campaign ended. Delighted when Obama was elected president, she declared: "We are growing up beyond the idiocies of racism and sexism." In a 2012 interview she rebuked those who expressed disappointment with his performance as president, insisting that he had "done a remarkable job". Obama has also praised Angelou, awarding her the Presidential Medal of Freedom in 2011 and quoting these lines she had written: "History, despite its wrenching pain, cannot be unlived, but if faced with courage, need not be lived again."

A tall and imposing woman, often wearing African dress, with a deep and expressive voice, Angelou was a remarkable performer of her own works, and it was in performance that her poetry could be best appreciated. She won the Grammy award for best spoken word album on three occasions, the first being for her recording of On the Pulse of Morning.

Angelou published more than 10 volumes of poetry, composed songs for musicals and films and wrote or co-wrote the scripts for more than a dozen plays, films and television programmes. She was nominated for an Emmy for her appearance in the TV mini-series Roots (1977) and also had prominent roles in films such as Poetic Justice (1993),which starred Janet Jackson and Tupac Shakur, and How to Make an American Quilt (1995), based on Whitney Otto's novel. A gourmet cook, she published recipe books and enjoyed entertaining in her large house in Winston-Salem, North Carolina.

She is survived by Guy.