Tolkien Fan Conventions to be Set on Cruise Ships

(from upi.com
by Karen Butler) 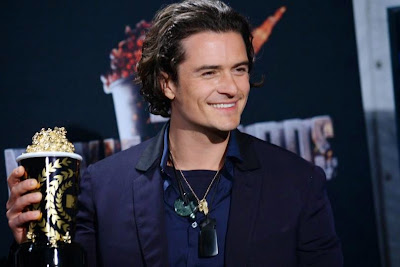 Actor Orlando Bloom appears backstage with the award he won for Best Fight - "The Hobbit: The Desolation of Smaug" at the MTV Movie Awards at Nokia Theatre L.A. Live in Los Angeles, California on April 13, 2014. UPI/Jim Ruymen
| License Photo

The events are expected to offer aficionados of The Hobbit, The Lord of the Rings and the Silmarillion novels and movies exclusive access to cast members, directors, producers, cosplayers, movie marathons and workshops.

"You've read the books....you've seen the films....you love absolutely everything that is related to Middle-earth and are probably voracious readers of Professor J.R.R Tolkien, the man himself," said a message on the company's website.

"You want to to chat with, party with, or just chill out with like-minded fans quoting their favorite pieces of the literature or film. Now imagine doing all that not in a hotel or convention center, but on-board a 5-star, floating hotel, cruising the seas that Professor Tolkien himself loved. Did you know that according to the Tolkien Society,
J.R.R. Tolkien and his wife spent their retirement in Bournemouth and Poole after his long and illustrious career at Oxford University? Bournemouth is famous for its beach, and Poole is famous as an historic port. Beaches, the seaside, and ports, or havens, are important in lots of Tolkien's stories."

The organizers of the events said Tolkien's great-grandson, Royd, has given the project his blessing.

"It's wonderful to see that, even with the movies now coming to a close, there are still a huge number of fans who want to come together and celebrate my great-grandfather's most treasured works," Royd Tolkien said in a statement Friday.

"His novels have inspired generations, and it's hugely exciting to see scholars, fans, cast members, producers and experts on his books gather in this way. I'll be on board participating in as many events as possible, and I'm really looking forward to what is sure to be a wonderful experience."

"I'm a great supporter of Trilo3y Voyages, whose Tolkien fan cruise looks hugely exciting for all involved," said Shaun Gunner, chairman of the Tolkien Society. "It's thrilling to see that Tolkien works still inspire such devotion and excitement among fans some 77 years after The Hobbit's release. I hope this cruise gives Tolkien fans some memories that will last a lifetime, and inspires them to continue celebrating the great fantasy worlds for many years to come."