(from theguardain.com
by Naill Williams) 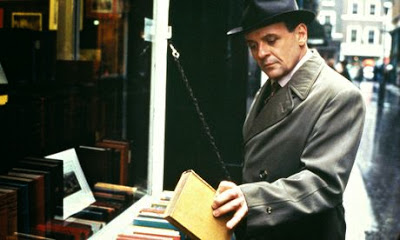 
While writing, I never thought of Ruth Swain, the central character of my new novel, as a bookworm. I thought of her only as a reader, and thought of the distance obsessive reading could create between the reader and the known world. Ruth's father is dead, and he has left her his books. She is reading them now in an attempt to understand him. She believes the books we read are a kind of map of who we are.

History of the Rain
by Niall Williams

If there is an issue with books featuring bookworms it is that reading in itself is not dramatic. Generally the reader or bookworm cannot be the hero unless they turn to action, and so often the appeal in these books is to witness the struggle of that act of transformation. To watch how their intelligence and sensitivity, (actually someone quite like you, Dear Reader) comes to terms with the world beyond the covers of a book.

Although perhaps a stretch, I enlist Hamlet for the bookworms. Even though, wisely, Shakespeare has him only reading onstage once, Hamlet is clearly an obsessive reader. He can walk and read at the same time. He reads and writes poetry, knows his Murder of Ganzago, knows his classical literature. He has the classic bookworm problem of reconciling the ideal world with the actual and would rather "be bounded in a nutshell". At the very least, bookworm-tendencies. But yes, he can also handle a sword.

In chapter one, Cervantes tells us that there is no Don Quixote. There is a man called Quexana who has read so many books about chivalry that he has lost his mind. He sells his land to buy books, renames himself Don Quixote and moves from Man of Reading to Man of Action. But he's his own supreme fiction and part of the great joy of this astonishing book is that we know here is a bookworm who just happens to be now riding out on a horse with a lance.

3. The Life of Samuel Johnson by James Boswell

A huge man, Johnson is more book-whale than bookworm. He is insatiable. He devours whole libraries. Blind in one eye since birth, he reads close-up, head atilt, candle close enough to drip wax onto Garrick's borrowed copy of Shakespeare while setting fire to his wig. When he's staying at Hester Thrale's house in Streatham there's a footman whose job it is to wait at the foot of stairs with a fresh wig to replace the one Johnson won't have realised is smouldering after an afternoon's reading. A magnificent bookworm.

4. The Uncommon Reader by Alan Bennett

One is a bookworm. Searching for her corgis, the Queen comes upon a mobile library and feels the proper thing is to borrow a book. And so begins a reading obsession. In this marvellously witty novella to be a reader is the most liberating thing in the world.

5. Possession by AS Byatt

It's 1986. In the Reading Room of the London Library, (perfect bookworm setting) Roland Michell, a post-doctoral research student, (perfect bookworm job) is turning the pages of a book that once belonged to his hero, the Victorian poet, Randolph Henry Ash. The book is thick and black and covered with dust. Its spine broken, it is bandaged and tied together with a bow. But among its pages Roland finds two unsigned letters written in the unmistakeable hand of the poet. The letters suggest a love affair. So begins one of the great bookworm-as-detective novels.

Transatlantic bookworming. In search of some obscure classics, Miss Hanff writes a letter from New York to Frank Doel of the London antiquarian booksellers, Marks & Co. A serious bookworm, Miss Hanff wants a range of books, things like a Latin vulgate dictionary, a copy of Robert Louis Stevenson's Virginibus Pueresque, a second edition of Izaak Walton's The Compleat Angler. And many, many more. And Frank Doel, the bookworm's perfect companion, duly finds them for her. When I worked in a New York bookshop in the 1980s you couldn't keep this slim book in stock. Every American wanted to believe in a London bookshop like this.

Perhaps the most brilliant of all bookworms, Matilda has the most unpromising beginning, her surname is Wormwood. The very things she craves, books, are absent from her home. She's a bookworm separated from books. She has to teach herself to read, and get to a library. And right from the start you're cheering for her. This is the ultimate bookworm-as-hero novel, with added superpowers thrown in.

8. Little Women by Louisa May Alcott

Josephine "Jo" March is one of the four March sisters. She's the one her father calls his "son Jo", she's the one with that troublesome characteristic for girls in 1860s New England, a strong personality And she's the one who reads. Jo loves books.; s he also writes. She writes plays for her sisters to perform. She creates her own versions of the world, and then, as she goes from girlhood to womanhood, she has the bookworm's dilemma, to adapt to the stereotype expected of her in the real world, or to invent her own way of being.

9. The Brief Wondrous Life of Oscar Wao by Junot Díaz

Perhaps the greatest recent addition to the humus of bookworms is Oscar Wao. Oscar's family came from the Dominican Republic to New Jersey. He is a Casanova when he is seven and for one full beautiful week loves two girls, Maritza and Olga. But once his ménage a trois collapses, Oscar retreats from the known world and inhabits another. This one is found in the novels of Lovecraft, Wells, Burroughs, Howard, Alexander, Herbert, Asimov, and others, as well as the comic books that make up the Marvel universe. In Díaz's brilliant narration Oscar's bookwormery and general nerdiness are transformed into something utterly cool.

And for acts of transformation, here's the ultimate. Our hero begins as an egg on a leaf. It's the perfect beginning for a bookworm character – he's just sitting there. Then you turn the page and pop! Out of the egg comes our Very Hungry Caterpillar. Without giving too much of the plot away, it's enough to say that over the next 18 pages, our hero literally worms his way through the book, holes begin to appear on the pages. And if you're like my children, having it read to them over and over more than 20 years ago, when you get to the last page you'll smile and admit even bookworms can be magical.
Posted by Mollydee55 at 11:30 AM