Mankind wonders if there is intelligent life elsewhere in the universe. But the new comic-book series Trees imagines aliens coming to Earth and not even caring if we're intelligent or not.

Written by Warren Ellis and illustrated by Jason Howard, the Image Comics title (debuting Wednesday) sets a sci-fi tale in the future, 10 years after huge, round extra-terrestrial obelisks, called Trees, just parked themselves on the planet and simply remained there.

No little green men hopped out wanting someone to take them to our leader. No spiffy melodies played by these sturdy alien pillars. No movement whatsoever, other than toxic waste coming out of orifices resembling crop circles every couple of years.

In fact, people have done more damage to themselves than the Trees — folks in New York City found out the hard way that nuclear weapons and biochemical warfare become inert around these behemoths, and now you need a gondola to cross town.

The action/inaction of the Trees are a big part of the story, but Howard's favorite aspect is how Ellis is exploring the characters that live in this strange world.

"While the background is this science-fiction concept," Howard says, "the story itself feels very human to me."

Ellis says he hatched the conceit behind Trees while ruminating Ventakesh Rao's thinking on "manufactured normalcy" and J.G. Ballard's particular brand of the horror of banality: "Those horrible, strange, disruptive things that we are somehow wired to take on board as 'just the way things are,' if you like — but they continue to have a disturbing pressure on our lives. There seemed to me to be a ton of stories in that idea."

Four story lines are introduced in the first issue: citizens of Rio de Janeiro avoiding law enforcement and a hazardous alien dump; a New York politician running for mayor and figuring out his policy about the Trees; a young artist wanting admittance into a Chinese city that's been quarantined with a Tree inside of the walls; and a science team discovering strange black flowers on an icy Norwegian island.

When it comes to those blooms, "if you're looking for the through-line for this first book, then that's the story to follow," Ellis teases.

There are major plotlines to introduce in issues to come, he adds. "But, comics or not, Trees has the shape of a short novel, and you don't introduce everyone and everything in the first chapter. It distorts the shape of the thing and leaves the reader nothing to discover going forward."

Howard wanted to capture a sense of reality in the sci-fi elements when designing this world. For example, it's set in the future so the technology isn't that dissimilar from what we have currently. And the stuff that is different is meant to look like a natural extension of what exists now.

"I love big, crazy, far-future science fiction," the artist says, "but I also love those stories that are close to our world, where you can recognize the situations but there's a twist to it and it feels like something that could be happening right around the corner."

He loves drawing the big world-spanning scenes showing the environment and giving a sense of Trees' size and impact on civilization. Howard's also enjoyed the design process experimenting with different looks for the alien monstrosities.

The more he worked on them, though, the more he felt that the strongest design was something very simple.

"If they were really alien in nature, maybe they would be very utilitarian and simple in their appearance," Howard says. "Also, because I knew that in the story we would be focusing on their effect on different parts of the world, I wanted a simple design so they could visually fit in with any culture that they landed in."

Figuring out his own actions and thoughts in such a scenario is one of the reasons why Trees exists, Ellis says. "I'm working these things out for myself by writing it."

Howard, too, has thought quite a bit about how he might react to this situation.

"Certainly at first it would be terrifying," he says, "but over time I think we humans are pretty good at adapting. So maybe they would just become normal for me.

"I like to think I would still be drawing comics somewhere under the shadow of a Tree." 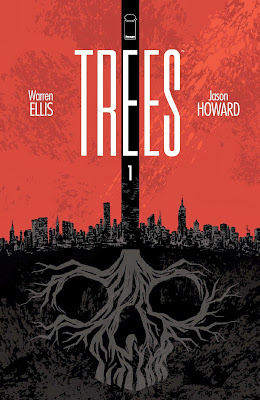