(from usatoday.com
by Vilma Gonzalez) 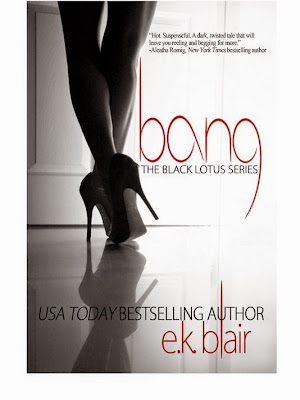 
They say when you take revenge against another you lose a part of your innocence.

But I'm not innocent.

I haven't been for a very long time.

My innocence was stolen from me. Taken was the life I was supposed to have. The soul I was born with. The ruby heart embedded in a life full of hopes and dreams.

I never even had a choice.

I mourn that life. Mourn the what-ifs.

I'm ready to take back what was always meant to be mine.

But every plan has a fatal flaw. Sometimes it's the heart.

When I heard E.K. Blair, USA TODAY best-selling author of the emotional Fading series, was writing a romantic suspense book, I was immediately interested. Yet the synopsis (above) did nothing in my quest to unearth the story line. It simply intrigued me even more. The intentionally cryptic approach in the synopsis carries over to the reading experience. This is a story layered in secrets. A plan fueled by insidious intent. I didn't quite know what to make of what I was reading as I worked to figure out the plan so clearly at play. It's a story of revenge. A story of love taken and love found. A story of a childhood so brutal that its experience defined the entirety of someone's life. There are parts that were absolutely heart-wrenching, but it's the stark rock bottom of our protagonist's ordeal that would set it all into motion.

"It's not a story anyone in their right mind would want to hear. It's the type of story that people want to believe doesn't really exist because it's too hard to stomach. It's too dark of a place for people to even consider being reality."

Bang is a tortuous tale of a girl who was left on her own, destroyed by the most evil of people and rebuilt with the sole purpose of seeking vengeance. We meet our protagonist, our villain, as a child. A girl who loved her daddy. A man who doted on her. Loved her. Protected her. Until one day, they took him. Took her. And everything faded to black. For years she was tossed through the foster care system only to end up with a life that killed her, both metaphorically and almost physically.

"Alone. Desolate. A life no one wants to believe is real — but is. I became dark inside. No. That's not true. I became colorless. You couldn't have painted a portrait of me because I no longer existed. To exist, you have to have life and I was merely a robot — a machine — tell me what you wanted and I'd do it, paralyzed to emotions and consequences."

Over the years, Nina transformed herself, becoming laser-focused on a plan that took shape when she married Bennett Vanderwal. He's wildly rich and loves her dearly.

And she hates him.

"I'm nothing more than his poison paradise."

Nina has a plan, but we don't know what it is or how it came to be. One fact was irrefutable, however. Nina went from being hunted to being the huntress. She's such a complex character. She's bad. She's good. She's broken. In fact, all the characters we meet are flawed in one way or another. Sometimes they are villains, sometimes they are victims. They are multifaceted beings who, when pushed too far, could — and would — break.

"I'm as strong as they come. Weakness derives from the soul. Most everyone has one, which gives a woman like me leverage. Leverage to play people to my liking, and so I do."

Nina then meets Declan — the final pawn in her scheme. But when the endgame is finally triggered into action, unexpected things transpire and a dangerous chaos wreaks havoc. There is so much to experience when you read this story. It's a chilling tale filled with suspense and steaminess, hopelessness and hope, romance and hate … and one, that by its end, will leave you irrevocably shocked.

Bang is the first book in the Black Lotus series. Book two is Echo, and book three is Hush. You can read the first chapter of Bang on Vilma's Book Blog.

Vilma: What was your inspiration behind this book? What did you want your reader to experience?

E.K.: The ending came to me one day when I was driving around listening to music. I wish I could tell you the song, but it would say too much! So, I knew exactly how I wanted this book to end, yet I didn't have a story and I had no idea who these people were. So I started working backwards to build a story to give me the ending I had initially envisioned.

I wanted the reader to feel it all: sickened, happy, enchanted, turned-on, gutted, excited, anxious, curious, sad, etc. … I wanted to put the reader through all those emotions while pulling you into the core of a villain — a villain in which the reader would love, hate and, ultimately, root for. The goal was to twist the mind of the reader just enough so they would accept the vile and brush off the good.

Vilma: During the book, we alternate between past and present tense as we begin to put together the puzzle pieces. Some of what happens in Nina's past is brutal, but clearly in the present tense she is very much our villain. How would you describe Nina? She's not an easy character to define …

E.K.: Complicated yet simple. She's a paradox, which made her tremendously difficult to write. She's strong and weak, good and evil, sick and insane, but all the while knowing it. She is still, beneath all the grit and lies, a tender 5-year-old girl longing for the innocence of a fairy tale. She's delusional. You mix it all up, and we have the most delicious cocktail of a character!

Vilma: This is a very different book as compared to your Fading series. Was the writing approach any different? If so, how?

E.K.: Yes. Where as the Fading series was so emotionally based, the Black Lotus series is very action based. But don't be fooled, there is still a great deal of emotion, but I have to keep my characters moving quickly so the reader doesn't fall into a lull, which would allow time to think and uncover the hidden truths of the story.

The voice also changed. Nina (Bang) is so different than Candace (Fading). Everything about this book had to look, feel, and sound different. I didn't want anyone reading this to even think about my other books. I simply wanted a clean slate in order to allow the reader to get lost within the pages.

Vilma: Are you a fan of suspense novels or movies? If so, what are some of your favorites?

E.K.: Truthfully? No. I don't watch TV and I rarely watch movies. Never did I think I would ever write a suspense/thriller, but the idea came to me and I decided to just run with it!

Vilma: Can you tell us anything about Echo? When do you expect to release it?

E.K.: Well, it is hard to say much, but I will tell you that it is a crazy ride. Probably crazier than what you saw in Bang. We will continue to unravel secrets and hidden agendas. I cannot tell you whose point of view Echo will be told from, but trust me, it will be a ride you do not want to miss! It will be intense, dark, deceitful, and all the yummies we love to read about!

As of now, I do not have an official release date, but I would love to have Echo out by the end of the year!

You can find more information at www.ekblair.com.

The Wild Side by R.K. Lilley

What it's about (courtesy of the author): Alasdair Masters is in a rut. He just hit 40, has been nearly celibate for the past year, and his life has turned into a daily sequence of lonely patterns that revolve around avoiding human contact. His tidy life is turned on its head when a hot young blonde at the gym who's been pseudo-stalking him decides to rock his world. A very young blonde. Way, way too young for him. The problem is, he can't seem to tell her no, and she just keeps coming back for more.

What is a dull introvert to do when a chaotic cyclone that oozes sexuality comes twisting into his life? Is a walk on the wild side just what he needs to get him on track or a disaster in the making? Is it possible for someone that much younger to be just what he needs, or is she a fortune hunter, as everyone keeps telling him? Is it his hormones telling him that the mysterious younger woman is the one, or could it be more?

Point of No Return by Tiffany Snow

What it's about (courtesy of Montlake Romance): This is the fifth and final book in the Kathleen Turner series. Each book should be read in order.

Kathleen Turner wasn't expecting to fall in love when she came to Indianapolis a year ago, much less with two very different men. And not just any men: brothers.

Blane Kirk, former SEAL turned attorney, is every woman's dream man. He's also a playboy who changes women as often as he changes his tie, and trying to hold on to Blane could only break Kathleen's heart.

Commitment is a foreign word to Kade Dennon, assassin-for-hire and genius hacker, and nothing about him is safe. A future with Kade would surely end in disaster — for both of them.

Past betrayals come to a head, and the choice Kathleen makes could sign her death warrant. Everything's at stake as Blane, Kade, and Kathleen reach the Point of No Return.

Vilma Gonzalez is a blogger, reader, marketer, wife and mom. She has an insatiable appetite for happily ever afters and a deep love of the written word. She is also determined to keep the promise she made to her 16-year-old self to finish writing a book before she dies. You can find more about her and read full reviews at Vilma's Book Blog. Please e-mail Vilma at loveinsuspense@gmail.com about content related to this column. Due to the volume of mail, e-mails may not be answered personally, but all will be read.
Posted by Mollydee55 at 12:38 PM