(from azcentral.com
by Shelley Gillespie) 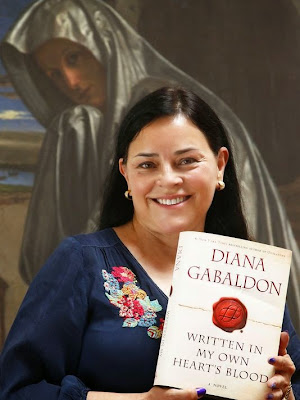 From a doctorate in bird-nesting patterns to a 20 million-book best-seller, Diana Gabaldon is a powerhouse author with a worldwide following and a TV series debuting this summer based on one of her best-sellers.

Her books include several genres, making it difficult to classify her writing. Time travel, extensively detailed history, strong female characters, grisly details of wars and battle, and situations to which a reader easily relates have built her following.

They also have kept her calendar full.

Recently, Gabaldon, 62, of Paradise Valley, postponed release of "Written in My Own Heart's Blood," her 14th book, for a couple of months to June 10 because of her public-relations and consulting responsibilities for the TV series that launches Saturday, Aug. 9, on Starz.

"Writers are not human Pez dispensers," Gabaldon said. "It used to take three years between books, but with the public relations (commitments), it now takes four."

After 20 years with four film options on her work, she has found a production company that represents "Outlander," which was No. 1 on the New York Times best-seller list, to her satisfaction.

Before the TV show airs and the book debuts, she is keynote speaker at "Buildin' the Dream," a conference for aspiring writers, in Phoenix on Thursday, May 29, bringing along secrets to her literary successes in 23 languages in 26 countries.

Gabaldon shares her breezy yet self-confidant approach with writers. During her keynote speech at "Buildin' the Dream," she is expected to discuss her three rules for writing: Read everything and evaluate what you've read; write, put the words on paper or the computer screen and over time they will get better; and, most important, don't stop writing.

She laughs at her early efforts to figure out what she should be writing about. Although she read a lot of mysteries, she didn't feel comfortable writing them because she would have to develop plots. So, she settled on historical novels as something she could research and not need to invent everything. She could "steal the details." For example, she had not been to Scotland before she began writing about it, but first researched extensively.

Her expansive loft-office decor features a healthy dose of royal blue, a color she favors in her clothing, as well. Her pride and joy is her floor-to-ceiling 1,500-book library on the wall opposite her desk.

By age 8, Gabaldon was sure she would be a writer. As an adult who did scholarly research and analyzed the content of bird gizzards, she wrote an 800-page monograph. Her fiction-writing career began with a practice book, testing the waters to see if her writing would be well-received. Writing about mid-18th-century Scotland came to her when she "was inspired by an old 'Dr. Who' episode … with a man in a kilt — fetching."

With two other jobs, three young children and a husband starting his computer-programming company, she shared her writing with an online book-and-literary community only. The small selections she placed on the site were hits with her growing following.

Because she was juggling jobs and family, her writing was consigned to the middle of the night initially. Even her husband, Doug Watkins, didn't know she was writing.

Watkins found out when he checked the computer they shared to find a file. He found hundreds of files labeled "Jamie."

"Jamie's the character in my book," Gabaldon replied.

He didn't object to her writing.

"If you do what you're supposed to be doing in life, the universe comes out to meet you," she said.

When she got stuck, she would take the dog for a walk or work on a freelance project. She says she didn't sleep more than about four hours a night in those days. She was committed to persevere and complete her projects. She is not an insecure person, but she did not give up her freelance work until she was certain that her writing proceeds would sustain her family.

Gabaldon's writing process is not linear. She finds triggers that start a scene. A character, a kernel, anything she senses can be the start of a scene. Although she is never quite sure where the scene might belong in the book's timeline, it all comes together. She admits to fiddling with her writing, perhaps hundreds of times, before she considers it complete.

Research, which figured strongly in her academic career, is essential to her books. Prior to the Internet, she accessed the Arizona State University library, which had just become digitized. Her other writing had been highly technical for a science-software quarterly she founded and her own scientific work, so finding sources on 18th-century Scotland was simple for her. She also relies on her own library.

Producers Ron Moore of "Battlestar Galactica" fame and Jim Kohlberg apparently have cracked the code to translating "Outlander" into a TV series to Gabaldon's satisfaction. Initial casting is complete and filming has begun. In February, she was present at the "table read" in Scotland and had a cameo role. Moore's wife is an avid fan, which led to his interest in producing "Outlander."

In her self-deprecating style, Gabaldon expects to continue in an advisory role on the series, "If the show is successful."

And, finally, she can get a good night's sleep.

Diana Gabaldon, 62, of Paradise Valley, has more than 20 million books in print in 23 languages in 26 countries. Seven of her novels have been on the New York Times best-seller list, topped by No. 1 "Outlander."

"A Breath of Snow and Ashes"

"An Echo in the Bone"

Gabaldon's May appearances in Valley

What: A conference for aspiring writers of any genre focusing on honing the writer's craft, publishing and the business of being an author.

Admission: Conference is sold out. May 29 booksigning/keynote address $29, online only at www.buildinthedream.com.

What: A romance readers' conference with small group chats with authors.

Admission: $89 online only at arizonadreaminevent.com. 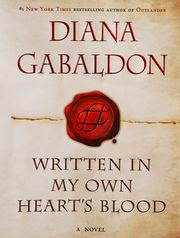