(from huffingtonpost.com
by Aaron Gwyn)


Though the days of cattle towns, cowboys, and barroom gunfights lasted barely 30 years, the Wild West remains one of the most mythologized periods in American history. Fiction writers started perpetuating these myths in dime novels as early the 1860s, detailing (and often embellishing) the exploits of such legends as Wild Bill Hickok, Jesse James, and the Dalton Brothers. These pulp fictions gave way to the best-selling Westerns of the early 20th century; Zane Grey, Max Brand, William McLeod Raine, and Louis L'Amour still have an audience today. But the Western has never been more alive, or, I would argue, better. Here are nine classic Westerns by writers of our time.

1) Blood Meridian (1985) by Cormac McCarthy:Literary critic Harold Bloom calls this novel "the ultimate Western, not to be surpassed," and I couldn't agree more. Set in the 1850s American West, Blood Meridian follows a teenager known simply as "The Kid" who joins a gang of scalp hunters. This band is led by the fearsome Captain Glanton, but it is Judge Holden, the most terrifying villain in all of literature, who will take up permanent residence in your nightmares.

2) The Assassination of Jesse James by the Coward Robert Ford (1983) by Ron Hansen:Hansen's mesmerizing second novel about Wild West outlaws (his first, Desperadoes, is about the Dalton Gang) focuses on that oddest of American values: celebrity. We see Jesse James through the admiring eyes of the man who would eventually murder him and become a celebrity in his own right.

3) The Sisters Brothers (2011) by Patrick DeWitt: This tremendous novel about two assassin brothers in the Old West will have readers laughing and wincing, sometimes simultaneously. DeWitt deconstructs the conventions of the Western with this uproarious, and surprisingly moving tale.

4) Doc (2011) by Mary Doria Russell: A gorgeous biographical novel dramatizing the tragic life of "Doc" Henry Holliday, Russell's story takes our eponymous character from his birth in Georgia to his death in a Colorado sanatorium at the age of 36. The years of Doc's friendship with lawman Wyatt Earp and their fight against outlaws in Tombstone, Arizona are especially affecting.

5) The Son (2013) by Philipp Meyer: Meyer's novel is an absolute tour de force, a multi-generational novel with an American hero/villain at its bloody-red heart. Eli McCullough is just a boy when he's taken captive by the Comanche, but he soon impresses his captors and becomes a member of the tribe. When he's forced to return to white civilization, he's an old warrior in a teenager's skin, and he sets out to conquer the world, first through cattle, then through oil. Recalling the best of Faulkner and McCarthy, Meyer's novel is the first true masterpiece of 21st-century fiction.

6) All the Pretty Horses (1992) by Cormac McCarthy: Readers fell in love with this tough and tender coming-of-age story, and McCarthy went from being a writer's writer who'd not sold more than 5,000 copies of his five previous novels to a National Book Award-winner and household name. In 1948, 16-year-old protagonist John Grady Cole sets out on horseback from his Texas ranch in search of a vanished country--the Old West. He manages to discover his idyllic world on a hacienda in Mexico where, after falling in love with the rancher's beautiful daughter, he must pay harsh prices for realizing his ideal. 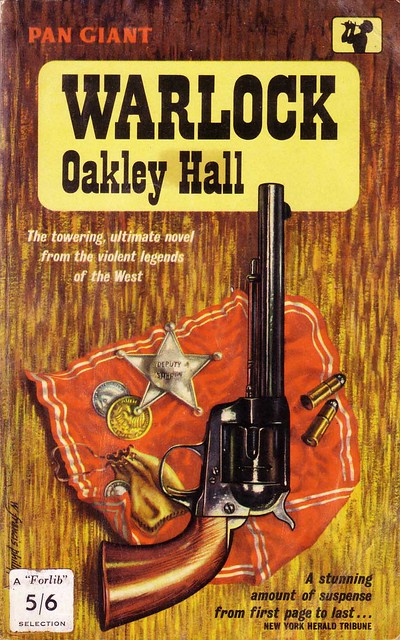 7) Warlock (1958) by Oakley Hall: Hall's masterful reworking of the gunfight at the O.K. Corral flies in the face of convention, and its account of violence in a fictional cattle town feels all-too real. Most poignantly, Warlock shows us the human cost of killing, and the horrors of being a hero.

8) True Grit (1968) by Charles Portis: Not even the Coen Brothers' excellent remake can quite capture the delight and sublime weirdness of Charles Portis's transcendent act of ventriloquism. His narrator, Mattie Ross, is a young girl seeking justice (and vengeance) for her murdered father, and her relationship with the cantankerous Marshall Rooster Cogburn, an unlikely but perfect pairing, elevate this seemingly simple novel to the level of great fiction.

9) Butcher's Crossing (1960) by John Williams:Williams's novel takes us west with a young Harvard dropout who comes to Kansas seeking adventure. He embarks on a buffalo hunt in the Colorado Rockies, but he and his fellow hunters get more killing than they bargain for. Snowed in for the winter, they finally return to civilization to find a West as changed as themselves.


Aaron Gwyn is the author of the new book Wynne's War.