(from horrororg.com
by Rachel Aukes
note: Woman in Horror month was in February I just found this interesting)

I’d wanted to write this blog post ever since receiving that comment in an email from a reader in regards to my latest novel, 100 Days in Deadland. Fortunately, that particular reader gave my book a chance anyway and I gained a new fan. But, it raised a question I’d never considered before. Do men, in general, skip over books written by wom

I’d wanted to think the reader’s comment represented a tiny minority, so I asked around. What I learned from my absolutely unscientific survey was that most men (that I asked) read far more books written by men than by women, often at the ratio of at least 4:1. When I asked women, they’re reading habits tended to reflect a better balance (with the exception of romance readers, who by far read most books written by women). I looked at my own e-library to be sure, and found it was about 50/50 male to female authors (but I admit I actively seek books written by women).

I don’t believe readers’ buying habits have anything to do with a belief that woman are poorer writers. A quick look at the New York Times Bestseller list refutes that assumption. J.K Rowling, the bestselling author of all time, is a woman. But, we’ll never know if a gender-neutral pen name was vital to those early critical sales. That her next pen name was unequivocally male hints that she believes gender plays a role in book sales

I’ve never personally seen editors or publishing houses discriminate against women writers in any way. They seem to care about a good, commercial story above all else. However, clearly, when it comes to readers’ buying habits, there are multiple variables at play in their search for the next good story. As I dug deeper, I narrowed it down to two equally-important factors that I believe predominately leads to men buying books written by men:

What if a male reader has two new releases in his hands, one written by a man and the other by a woman? If both stories seem equally intriguing, what makes him choose the book written by a man? Here’s where the second factor comes into play.

2. Perception. Hidden between the covers is the crux of gender bias in readers’ buying habits. A pervasive stereotype I’ve seen pop up time and again is that men write action-focused stories while women write relationship-focused stories. Personally, I don’t believe it. I’ve read fantastic, intense books by women and have read incredible, heartfelt books by men. In this case, perception—not reality—matters.

It’s a self-fulfilling prophecy. If a reader believes he’ll enjoy the book written by a man more, that’s where he’ll spend his money. If he likes the book, then he believes he made the right choice, and the process repeats itself. But, if he never gives the other book a chance, he’ll never know if it was worse—or better—than the one he’d just read. He could be missing out on the greats like Shirley Jackson, Margaret Atwood, and Anne Rice as well as some of the lesser known (but equally talented) writers like Kathe Koja and Rhiannon Frater.

I’m not blaming anyone for gender bias. It exists, that’s all that matters. The real issue is what we can do to reduce gender bias. As long as the ratio of women to men writers matches the ratio of published books written by women and men, then I think publishers are offering a fair selection to readers. I believe the HWA does a great job at promoting gender equality in the horror genre. The latest round of Bram Stoker nominations includes roughly 20% women authors, which I suspect is comparable to the ratio of women to men horror authors out there.

Perception is another beast altogether. I think any time we can squash stereotypes, we should try. I know, I know, it’s not easy, but that’s no excuse not to try. The best way to do this is to start with ourselves. So, I leave you with a challenge: Buy a book you wouldn’t normally buy. Give it a shot. You just might find that you like it. 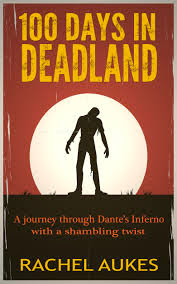 Rachel Aukes is the bestselling author of 100 Days in Deadland, which was named one of the best books of 2013 by Suspense Magazine and one of the best zombie books by the Huffington Post. Rachel lives in Iowa with her husband and an incredibly spoiled sixty-pound lap dog. When not writing, she can be found flying old airplanes and trying (not so successfully) to prepare for the zombie apocalypse. Learn more about her here.